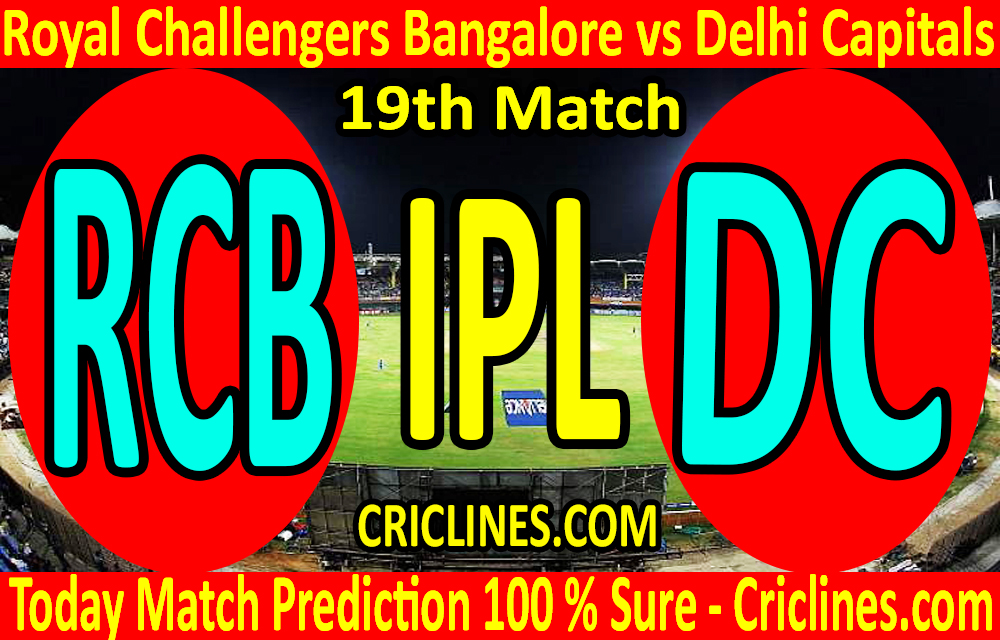 The cricket fans are ready to witness yet another big battle of the Indian Premier League. The 19th Match match of Dream11 IPL T20 2020 is scheduled to play between Royal Challengers Bangalore and Delhi Capitals on Monday, 5th October 2020 at Dubai International Cricket Stadium, Dubai. We are posting safe, accurate, and secure today match prediction for all matches of IPL T20 free.

Royal Challengers Bangalore had changed their history of six years of losing early matches in this edition of the Indian Premier League. Three wins from four matches had put them in the second position on the points table. They also had good news as their skipper, Virat Kohli is back in the form. They won their most recent match against Rajasthan Royals with a handsome margin of eight wickets. They lost the toss and were asked to field first in the most recent match. The way how their bowling unit performed in that match was just good. They leaked 154 runs on a batting favored pitch. They used six bowlers in that match and almost bowlers from their side performed well. Yuzvendra Chahal was the most successful and highest wicket-taker from their side who picked three wickets in his four overs bowled out against 24 runs. Isuru Udana picked two wickets in the previous match but he leaked plenty of runs. He was charged for 41 runs his four overs bowled out. Navdeep Saini was the other bowler who gives a good performance with the ball. He picked one wicket in his four overs bowled out and he was charged for 37 runs. Washington Sundar was the most economical bowler from their side who leaked 20 runs in his four overs but he failed to pick any wicket. Shivam Dube and Adam Zampa also remained wicket-less in the previous match.

The performance of the batting order of Royal Challengers Bangalore was just outstanding in the previous match. They chased the target of 155 runs in 19.1 overs with eight wickets in hand. The skipper, Virat Kohli finally got his form back in the previous match. He was the highest run-scorer from the RCB side who remained not out after scoring 72 runs. He smashed seven boundaries and two sixes during his inning. Devdutt Padikkal also had an outstanding performance with the bat. He scored 63(45) runs and smashed six boundaries and one six. AB de Villiers remained not out after scoring 12(10) with the help of one boundary. Aaron Finch was the only batsman from their side who failed to put some big runs on the board. He was out by Shreyas Gopal and could manage to score eight runs.

Delhi Capitals had started their campaign in this season of Dream11 IPL in a superb way. They had played a total of four matches with three wins to their name. They had lost one match and are leading the points table right now. They are coming to this match on the back of a massive win over Kolkata Knight Riders in their most recent match with the margin of 18 runs. That was a high scoring match that we had seen in this tournament so far. They lost the toss and were asked to bat first. Their batting order had an outstanding performance in that match. They put a total of 228 runs on the board in their inning of 20 overs which is the highest total in this season of Indian Premier League right now. The top order of DC had a superb performance in that match. The skipper, Shreyas Iyer was the highest run-scorer from their side who remained not out after scoring 88(38) and smashed seven boundaries and six huge sixes during his inning. Prithvi Shaw also had a superb performance with the bat. He scored 66(41) runs with the help of four boundaries and the same sixes. Rishabh Pant scored 38(17) while Shikhar Dhawan had 26 runs to his name.

The 19th Match match of the Indian Premier League is going to be held at the Dubai International Cricket Stadium, Dubai. We had observed in the previous matches played here that the pitch here at this venue is good for batting. The track is slower than the others we have seen and helps the spinners quite a bit. We are hoping that the surface is bound to get slower and be a bit more difficult for batting in this match. A score of 190 is going to be tough to chase.

Dream11 fantasy team lineup prediction for Royal Challengers Bangalore vs Delhi Capitals 19th Match match IPL 2020. After checking the latest players’ availability, which players will be part of both teams, he possible tactics that the two teams might use as we had leaned from previous seasons of Indian Premier League to make the best possible Dream11 team.