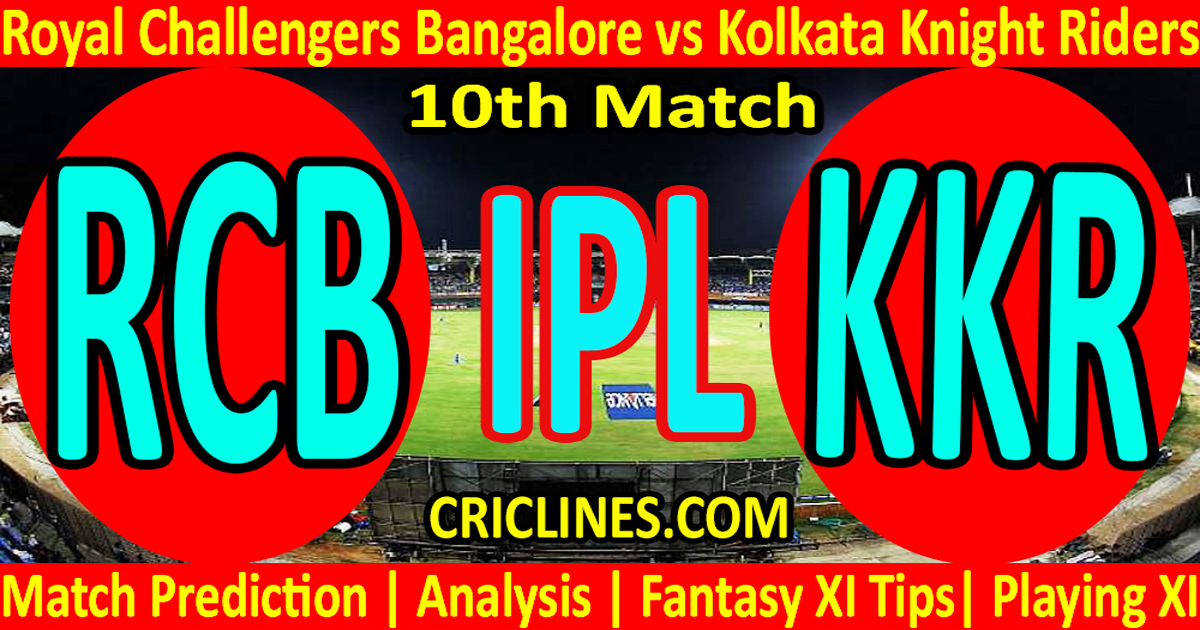 The world is ready to witness yet another big battle of the IPL T20. The 10th Match of the Indian Premier League is scheduled to play between Royal Challengers Bangalore and Kolkata Knight Riders on Sunday, 18th April 2021 at MA Chidambaram Stadium, Chennai. We are posting safe, accurate, and 100% secure today match prediction for all matches of IPL T20 free.

Royal Challengers Bangalore had never won both opening matches in any edition of IPL but in the 14th edition, this had happened. This team had won both matches and are leading the points table when we are writing this. They won the first match against Mumbai Indians and then they beat Sunrisers Hyderabad in their most recent match by the margin of six runs. RCB has a very strong batting and bowling department but they never had justice with it. Their performance in the previous match is an example of it. A team who had batters like Virat Kohli, AB de Villiers, Devdutt Padikkal, Glenn Maxwell, and Daniel Christian, could manage to score just 149 runs in their 20 overs inning. Glenn Maxwell was the highest run-scorer from their side who scored 59 runs at the strike rate of 143 runs with the help of five boundaries and three sixes.

The skipper, Virat Kohli spent some time on the pitch but failed to put some big runs on the board. He had 33 runs to his name while AB de Villiers, who had an outstanding inning with the bat, could manage to score just one run. Royal Challengers Bangalore has some plus points when it comes to the bowling department. They have a lot of options in bowling, Mohammed Siraj, Shahbaz Ahmed, Kyle Jamieson, Washington Sundar, Yuzvendra Chahal, Harshal Patel, and Daniel Christian, they all are the regular bowlers. Shahbaz Ahmed was the most successful and highest wicket-taker in the previous match who picked three wickets against just seven runs in two overs. Harshal Patel once again performed well in the second match and picked two wickets. Mohammed Siraj also picked two wickets while Kyle Jamieson had one wicket to his name.

Kolkata Knight Riders had a good start to this edition of IPL and won the opening match against Sunrisers Hyderabad by the margin of 10 runs but they failed to continue the winning momentum and lost the next match against Mumbai Indians by the same margin. The previous match of KKR was easy to win but their middle order almost collapsed at the end. Their batting order destroyed the efforts of the bowling unit. The bowling unit of KKR performed well in the previous match. They restricted the strong batting order of Mumbai Indians on a total of 153 runs. Andre Russell was the highest wicket-taker who have five wickets to his name. This was for the first time when he had got five wickets in any t20 match. Pat Cummins picked two wickets while Chakravarthy, Shakib ul Hasan, and Prasidh Krishna picked one wicket each in the previous match.

The batting order of Kolkata Knight Riders had a good opening start of 72 runs but failed to chase the target of 153 runs. The middle batting order of the Kolkata Knight Riders almost collapsed in the previous match. Nitish Rana was the most successful and highest run-scorer with 57 runs to his name. He faced 47 deliveries and smashed six boundaries and two sixes. Shubman Gill scored 33 runs while he faced 24 balls and smashed five boundaries and one-six. No other batsmen from there could not even enter into double-figure. Rahul Tripathi scored five runs while the skipper, Eoin Morgan could manage to score just seven runs. Andre Russell once again failed to put some big runs on the board and scored just nine runs.

Royal Challengers Bangalore is overall a strong team than Kolkata Knight Riders. They have the best players in the t20 format. The batting order of this team is also strong and some well-known hitter of t20 format is part of the squad of this team, so the winning chances of today match for Royal Challengers Bangalore have been increased. The equation of who will win today cricket match prediction and who will win the cricket match today is mentioned as under.

The 10th Match of IPL T20, 2021 is going to be held at the MA Chidambaram Stadium, Chennai. We had observed in the previous matches played here that the pitch here at this venue is good for batting in early overs. The track is slower than the others we have seen and helps the spinners quite a bit. We are hoping that the surface is bound to get slower and be a bit more difficult for batting in the last overs this match. A score of 185 seems to be a par score.

Dream11 fantasy team lineup prediction for Royal Challengers Bangalore vs Kolkata Knight Riders 10th Match IPL 2021. After checking the latest players’ availability, which players will be part of both teams, the possible tactics that the two teams might use as we had learned from previous seasons of the Indian Premier League to make the best possible Dream11 team.