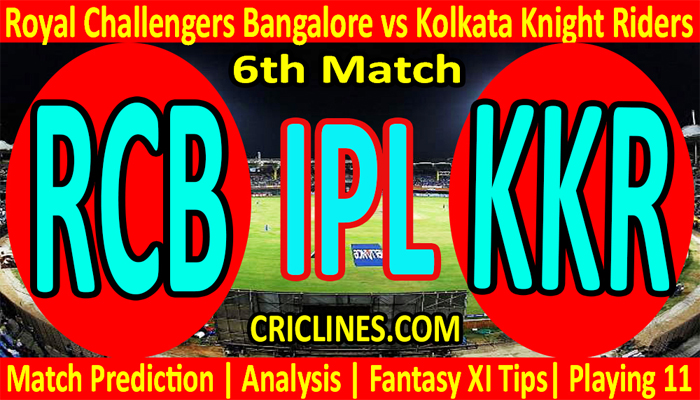 The world is ready to witness yet another big battle of the IPL 2022. The 6th match of the Indian Premier League 2022 is scheduled to play between Royal Challengers Bangalore and Kolkata Knight Riders on Wednesday, 30th March 2022 at Dr. DY Patil Sports Academy, Mumbai. We are posting safe, accurate, and 100% secure today match prediction for all matches of IPL T20 free.

Royal Challengers Bangalore had kept alive their tradition of losing early matches in IPL and had lost their first match against Punjab Kings even after having an excellent batting performance. We mentioned in the IPL prediction that RCB will face some issues with their bowling department and exact we observed it. Kolkata Knight Riders had a winning start to IPL 2022 and won their opening game against the defending champions, Chennai Super Kings very easily.

The first match of Royal Challengers Bangalore was the highest-scoring which they lost against Punjab Kings. They are going to play their second match at the same venue and we are sure that this match will also be high scoring. Virat Kohli played his first even match in IPL as a player, not as captain, and performed well. We think that the pressure of being captain is removed and it had improved his performance which we observed in the first match against Kings. He remained not out after scoring 41 runs on just 29 balls with the help of one boundary and two huge sixes. Faf du Plessis is leading RCB and had played as a leader should play.

Faf du Plessis provided a good start to Bangalore. He scored 88 runs on 57 deliveries at the strike rate of near about 155. He smashed three boundaries and seven huge sixes during his inning. We mentioned in the IPL prediction of the first match of RCB against Punjab Kings that Bangalore will face some issues with the bowling department and this happened exactly. They failed to defend the total which was easy to defend and leaked the target of 206 runs in 19 overs. Mohammed Siraj was the highest wicket-taker but he leaked the runs at the rate of 15 runs per over. Akash Deep, Wanindu Hasaranga, and Harshal Patel picked one wicket each. In our opinion, the batting order of RCB is strong but they need to improve their bowling department.

Kolkata Knight Riders made some smart choices in the auctions of IPL 2022 and we saw the result in their very first match where they beat the defending champion, CSK by a handsome margin of six wickets. We observed outstanding performance by their bowling department and restricted the strong batting order of Chennai to just 131 runs in 20 overs. Umesh Yadav gave an early breakthrough and picked the wickets of Ruturaj Gaikwad and Devon Conway. Varun Chakravarthy and Andre Russell picked one wicket each while Shivam Mavi and Sunil Narine were the bowlers who failed to pick any wicket.

We have no doubt that the batting order of Knight Riders is very strong and experienced and the opening match of this team was the witness. They chased the target of 132 runs in 18.3 overs even Andre Russell Sunil Narine did not come to bat. Ajinkya Rahane proved the highest run-scorer with 44 runs to his name. He faced 34 balls and smashed six boundaries and one six. Sam Billings scored 25 runs while Nitish Rana could manage to score 21 runs.

Royal Challengers Bangalore had won three out of the most recent matches five played matches while Kolkata Knight Riders had won four out of five recently played matches.

KKR is overall a strong team when we compare it with Royal Challengers Bangalore. They have the best players in the t20 format of cricket. The batting order of this team is also strong and some well-known hitters of the t20 format are part of the squad of this team, so the winning chances of today’s match for Kolkata Knight Riders have been increased. The equation of who will win today’s cricket match prediction and who will win the cricket match today is mentioned as under.

The 6th match of IPL T20, 2022 is going to be held at the Dr. DY Patil Sports Academy, Mumbai. We had observed in the previous matches played here that the pitch here at this venue is good for batting in early overs. We had seen a total score of near about 400 runs in the first match of this tournament. The track has a good amount of pace and bounce which allows the batsmen for good cricketing shorts but this ground also has big boundaries which can be a plus point for the bowlers. A score of 180 plus seems to be a par score.

Faf du Plessis, Ajinkya Rahane, and Umesh Yadav are the key players to watch in this match.

Dream11 fantasy team lineup prediction for Royal Challengers Bangalore vs Kolkata Knight Riders 6th Match IPL 2022. After checking the latest player’s availability, which players will be part of both teams, the possible tactics that the two teams might use as we had learned from previous seasons of Indian Premier League to make the best possible Dream11 team.

We had provided you with the above-mentioned today’s prediction on the basis of our research, understanding, and analysis. These prediction tips have also been based on the reports that we have from our different sources. You can consider the point we had provided you and in the end, the decision will be yours.