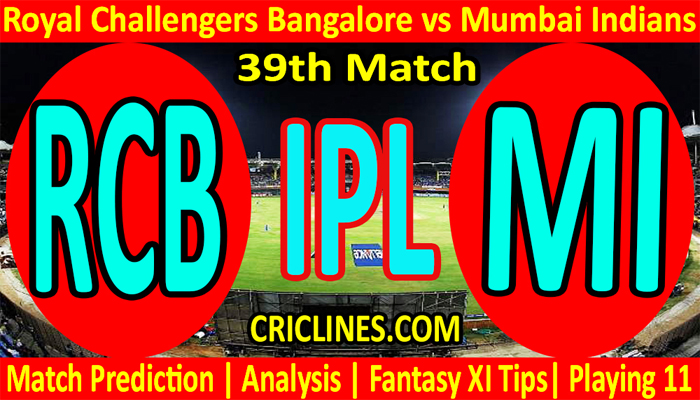 The world is ready to witness yet another big battle of the IPL T20. The 39th Match of the Indian Premier League is scheduled to play between Royal Challengers Bangalore and Mumbai Indians on Sunday, 26th September 2021 at Dubai International Cricket Stadium, Dubai. We are posting safe, accurate, and 100% secure today match prediction for all matches of IPL T20 free.

Royal Challengers Bangalore is the team that had failed to have a good start to the second leg of IPL and had lost their both recently played matches. They had won five out of nine matches played so far and are holding 3rd place on the points table. Mumbai Indians is the other team who had lost the most recent two matches and this is a very tough time for the defending champions. They have to win this match to survive. They are laying at the 6th position on the points table after winning four out of nine matches played so far.

Royal Challengers Bangalore lost their most recent match against Chennai Super Kings even after having a superb batting start. Their openers put a total of 111 runs for the 1st wicket partnership. Virat Kohli scored 53 runs in the previous match which is a good sign for this team. We know that he was struggling in run-scoring with the new ball in some previous match. Devdutt Padikkal was the other batsman who put some runs on the board in the previous match. He scored a total of 70 runs on 50 deliveries with the help of five boundaries and three huge sixes. The middle batting order of RCB failed to perform well once again. AB de Villiers scored 12 runs while Glenn Maxwell scored just 11 runs.

We had seen some poor performances by the bowling department of Royal Challengers Bangalore and the same happen in the previous match where they failed to defend the target of 157 runs and leaked this target in 18.1 overs. Harshal Patel was the highest wicket-taker from their side who picked two wickets in his 3.1 overs bowled out against 25 runs. Yuzvendra Chahal and Glenn Maxwell picked one wicket each while Mohammed Siraj, Navdeep Saini, and Wanindu Hasaranga were the bowlers who failed to pick any wicket. In our opinion, RCB may replace Hasaranga with Dan Christian in this match.

The defending champion, Mumbai Indians had been struggling in this second half of IPL. After losing against Chennai Super Kings, they had lost their most recent match against Kolkata Knight Riders by a handsome margin of seven wickets. Mumbai Indians have a strong top and middle batting order but they had failed to put a big total on the board. They could manage to score 166 runs in their inning of 20 overs in the previous match against KKR. de Kock was the most successful and highest run-scorer from their side who scored 55 runs on 42 deliveries with the help of four boundaries and three huge sixes.

The skipper, Rohit Sharma could manage to score 33 runs while Kieron Pollard scored 21 runs. The bowling department of Mumbai Indians also failed to give the best performance in the previous match. They failed to defend the target of 156 runs and leaked this target in just 15.1 overs. Jasprit Bumrah was the only successful bowler from their side who picked three wickets in his four overs bowled out against 43 runs. Trent Boult, Adam Milne, Krunal Pandya, and Rahul Chahar were the bowlers who failed to pick any wicket.

Royal Challengers Bangalore had won just one out of five most recent matches played while Mumbai Indians had won two out of five recently played matches.

Royal Challengers Bangalore is a strong and well-balanced team and has a strong batting and bowling department which is in good form. The batting and bowling squad of this team is much stronger at least on papers. According to today’s prediction, Royal Challengers Bangalore is the favorite team that will win this match. There are many factors that make Mumbai Indians a favorite team to win this match. Some of the key factors are mentioned as under:

The 39th Match of IPL T20, 2021 is going to be held at the Dubai International Cricket Stadium, Dubai. We had observed in the previous matches played here that the pitch here at this venue is good for batting in early overs. We had seen a total score of near about 220 runs in the most recent three matches played here. The track has a good amount of pace and bounce which allows the batsmen for the good cricketing shorts but this ground also has big boundaries which can be a plus point for the bowlers. A score of 180 plus seems to be a par score.

Virat Kohli, Devdutt Padikkal, and Kieron Pollard are the key players to watch in this match.

Dream11 fantasy team lineup prediction for Royal Challengers Bangalore vs Mumbai Indians 39th Match IPL 2021. After checking the latest player’s availability, which players will be part of both teams, the possible tactics that the two teams might use as we had learned from previous seasons of the Indian Premier League to make the best possible Dream11 team.