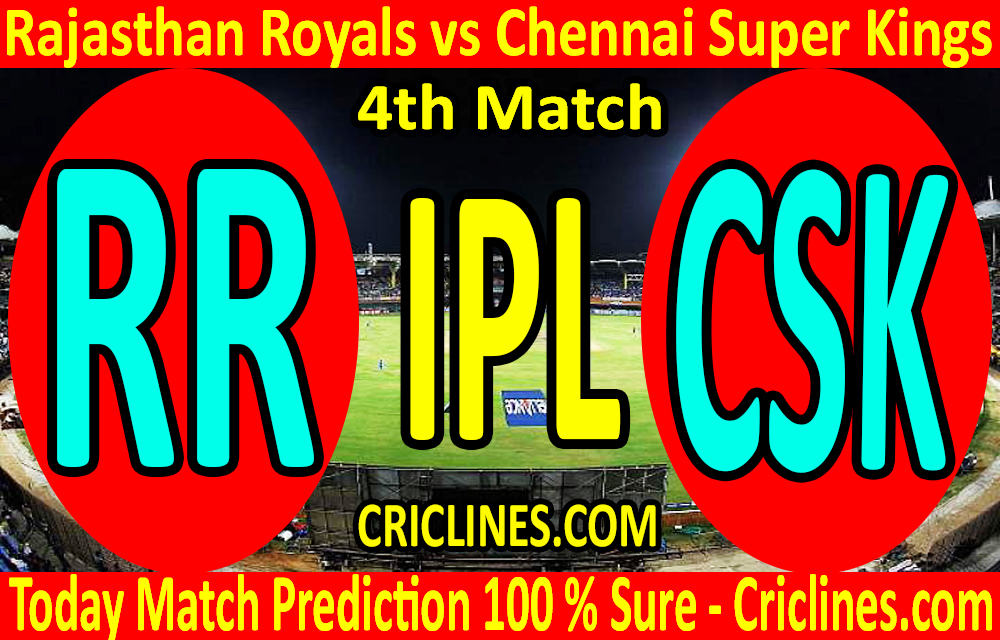 The world is ready to witness yet another big battle of the Indian Premier League. The 4th Match match of Dream11 IPL T20 2020 is scheduled to play between Rajasthan Royals and Chennai Super Kings on Tuesday, 22nd September 2020 at Sharjah Cricket Stadium, Sharjah. We are posting safe, accurate, and secure today match prediction for all matches of IPL T20 free.

Rajasthan Royals is playing in the Indian Premier League since the opening season back in 2008 but they were banned for two years from 2017 to 2018. This team had won the title of IPL T20 for one time and that happened in the very first edition where they beat Chennai Super Kings in the final. Rajasthan Royals were the second worst-performing team of the previous season IPL. Like all other teams, they also played a total of 14 matches at the league stage with just five wins to their name. They lost eight matches while their one match was ended with no result. They are holding the second position from the bottom of the points table after the end of league stage matches. We had observed in the previous seasons that this team comes to this tournament with domestic talent but the team management of Rajasthan Royals had made some key changes in their final squad for this team of Dream11 IPL.

Steven Smith will be leading Rajasthan Royals during this edition of the Indian Premier League. The batting order of this team is strong at least on papers and especially, their top order is solid. David Miller, Robin Uthappa, Jos Buttler, and Steve Smith will be leading the top-order of this team. Ben Stokes was also expected to be the part of the squad of this team but this is not final yet. One bad this for the Royals is that their key player will not available for some first few matches. Some domestic players who had performed well in the recent tournament, are also the part of the batting squad of this team. Riyan Parag, Manan Vohra, Yashasvi Jaiswal, and Shashank Singh are the local batters on this side. Sanju Samson, Anuj Rawat, and Robin Uthappa are the wicket-keeper batsmen. Mahipal Lomror, Shreyas Gopal, Aniruddha Joshi, and Tom Curran are the key all-rounders. The bowling unit of this team is strong for this season. Tom Curran and Jofra Archer are the attacking bowlers. Tom had performed well against Australia and is in good form. Jofra Archer also had an outstanding performance in their recent series against Australia and is in outstanding form. This is a good thing for the Royals that their key bowlers are in good form. Varun Aaron, Oshane Thomas, Akash Singh, and Andrew Tye are the key bowlers for the Rajasthan Royals with Tom Curran and Jofra Archer.

The opening pair of Chennai Super Kings failed to give a good start to their team in the previous match. They lost their both openers on the total of just six runs but a partnership of 115 runs between Faf du Plessis and Ambati Rayudu took their team near the win. The 18 runs of Sam Curran played a major role in the first win of Chennai Super Kings. They chased the target of 163 runs in 19.2 overs. Ambati Rayudu was the most successful and highest run-scorer from their side who scored 71 runs on 48 deliveries with the help of six boundaries and three huge sixes. Faf du Plessis also had an outstanding performance with the bat. He remained not out after scoring 58 runs. He faced 44 deliveries and smashed six boundaries during his inning. Sam Curran smashed the inning of 18 runs on just six balls with the help of two sixes and one boundary.

Chennai Super Kings is full of experienced and young players of the t20 format. The batting order of this team is also strong and some well-known hitter of t20 format is the part of the squad of this team, so the winning chances of today match for Rajasthan Royals have been increased. The equation of who will win today’s cricket match prediction and who will win the cricket match today is mentioned as under.

The 4th Match match of the Indian Premier League is going to be held at the Sharjah Cricket Stadium, Sharjah. We had observed in the previous matches played here that the pitch here at this venue is good for batting. The track is slower than the others we have seen and helps the spinners quite a bit. We are hoping that the surface is bound to get slower and be a bit more difficult for batting in this match. A score of 190 is going to be tough to chase.

Dream11 fantasy team lineup prediction for Rajasthan Royals vs Chennai Super Kings 4th Match match IPL 2020. After checking the latest players’ availability, which players will be part of both teams, he possible tactics that the two teams might use as we had leaned from previous seasons of Indian Premier League to make the best possible Dream11 team.