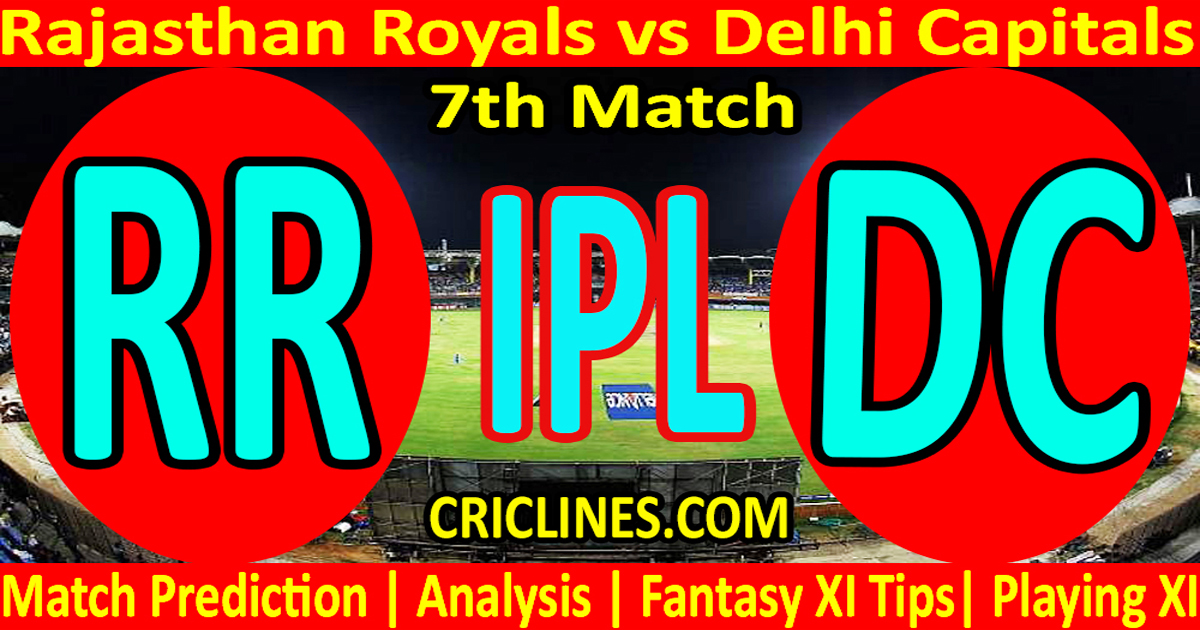 The cricket fans are ready to witness yet another big battle of the IPL T20. The 7th Match of the Indian Premier League is scheduled to play between Rajasthan Royals and Delhi Capitals on Thursday, 15th April 2021 at Wankhede Stadium, Mumbai. We are posting safe, accurate, and 100% secure today match prediction for all matches of IPL T20 free.

Rajasthan Royals had faced a couple of massive blows right at the start of this season of IPL. Ben Stokes is not out of this tournament due to his broken finger during this first match while Jofra Archer is also ruled out. Now, they are going to play their all matches without their two key players. We think that David Miller and Liam Livingstone will replace Ben Stokes and Jofra Archer. Liam Livingstone had been good with the bat and also can bowl in the middle overs. The batting order of Rajasthan Royals performed well overall in the first match against Punjab Kings but could not get over the line. The new skipper, Sanju Samson scored this third century in IPL and first as captain and now, he is the first captain who scored a century in any IPL match as a debutant captain. He scored 119 runs on 63 deliveries at the strike rate of near about 190. He hit 12 boundaries and seven sixes during his inning.

Except for Sanju Samson, no other batsman from the Rajasthan Royals could put some big runs on the board and they kept losing wickets regularly. Riyan Parag showed some power hitting and scored 25 runs on just 11 balls. Jos Buttler also scored 25 runs while Shivam Dube had 23 runs to his name. Jos Buttler has a big role after Ben Stokes is not available. He had to show some power hitting at the middle overs. The bowling department of Rajasthan Royals was underperforming in the first match and they leaked plenty of runs. A couple of drop catches were also the reasons for that. Chetan Sakariya was the only bowler who showed some class and picked three wickets against 31 runs. Chris Morris picked two while Riyan Parag had one wicket to his name. Mustafizur, Shreyas Gopal, Ben Stokes, Rahul Tewatia, and Shivam Dube were the bowlers who failed to pick any wicket. We think that Rajasthan Royals need to improve the batting and bowling skills to compete with the strong teams of this tournament.

Delhi Capitals won the opening match of this tournament even their key two bowlers, Kagiso Rabada and Anrich Nortje were missing. Now both players are back into the team and we think Tom Curran and Chris Woakes will not the part of the final playing eleven for this match. The conditions at the Wankhede Stadium will also help Kagiso Rabada and Anrich Nortje and it will be interesting to see these bowlers. The bowling department of Delhi Capitals failed to give the best performance in the first match. Avesh Khan proved the most successful bowler with two wickets to his name against 23 runs. Chris Woakes was the other bowler who picked two wickets against 18 runs. Tom Curran and Ravi Ashwin picked one wicket each while A Mishra and Stoinis failed to pick any wicket. We think that the performance of the bowling department of Delhi Capitals will better than the first match.

A plus point for Delhi Capitals is that both opening batsmen are in superb form. Prithvi Shaw and Shikhar Dhawan had an opening partnership of 138 runs in the first match. Prithvi Shaw scored 72 runs with a strick rate of 189 while Shikhar Dhawan smashed the inning of 85 runs on 54 deliveries with the help of 10 boundaries and two sixes. We think that Ajinkya Rahane is not playing as an opening batsman, he does have a place in the team. He does not have a good record when he is playing in the middle order. We also noticed a thing that there is no hard hitter in the middle and last over for some power hitting. Steve Smith can also be the part of the final playing eleven and if happens, it means that Shimron Hetmyer will be missing this match.

Delhi Capitals is a strong and better-balanced team and the addition of Anrich Nortje and Kagiso Rabada had added extra strength in their bowling department. The batting and bowling squad of this team is much stronger at least on papers. According to our match prediction, Delhi Capitals is the favorite team who will win this match. There are many factors that make DC a favorite team to win this match. Some of the key factors are mentioned as under:

Delhi Capitals is overall a strong team than Rajasthan Royals. They have the best players in the t20 format. The batting order of this team is also strong and some well-known hitter of t20 format is part of the squad of this team, so the winning chances of today match for Delhi Capitals have been increased. The equation of who will win today cricket match prediction and who will win the cricket match today is mentioned as under.

The 7th Match of IPL T20, 2021 is going to be held at the Wankhede Stadium, Mumbai. We had observed in the previous matches played here that the pitch here at this venue is good for batting in early overs. The track is slower than the others we have seen and helps the spinners quite a bit. We are hoping that the surface is bound to get slower and be a bit more difficult for batting in the last overs this match. A score of 185 seems to be a par score.

Dream11 fantasy team lineup prediction for Rajasthan Royals vs Delhi Capitals 7th Match IPL 2021. After checking the latest player’s availability, which players will be part of both teams, the possible tactics that the two teams might use as we had learned from previous seasons of the Indian Premier League to make the best possible Dream11 team.