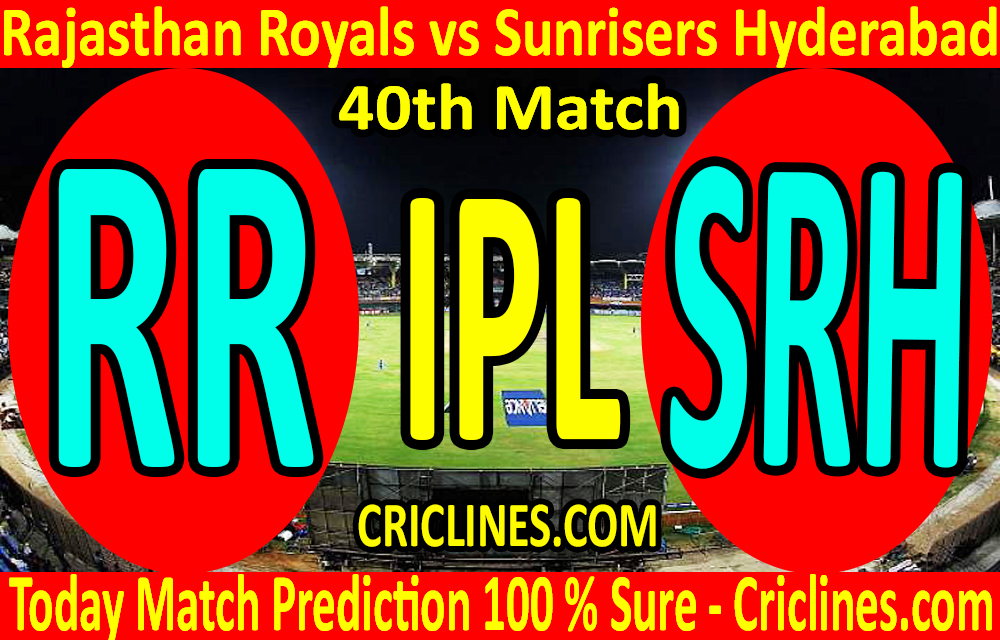 The world is ready to witness yet another big battle of the Indian Premier League. The 40th Match of Dream11 IPL T20 is scheduled to play between Rajasthan Royals and Sunrisers Hyderabad on Thursday, 22nd October 2020 at Dubai International Cricket Stadium, Dubai. We are posting safe, accurate, and 100% secure today match prediction for all matches of IPL T20 free.

A couple of strategic changes in the batting order had worked for Rajasthan Royals in the previous match against CSK had worked and we are hoping they will continue it. The addition of Ben Stokes had made the batting order of RR strong. Robin Uthappa had moved up to the order while Jos Buttler to the middle order. They are thinking that Steve Smith and Jos Butter can handle the batting order in the middle overs and we had observed against CSK that this plan worked for RR as they lost early three wickets but Jos Buttler did the damage in the middle overs. We are expecting a similar approach to this match too. Sanju Samson, Robin Uthappa, and Ben Stokes had been given a free hand to play as they want while Riyan Parag, Rahul Tewatia, Jos Buttler, and Steve Smith will take care of the middle overs.

Rajasthan Royals had been below the average in this season of the Indian Premier League while they had left four matches to play including this match. Four wins from ten matches had put them to the 6th position on the standings. They had won the most recent match against Chennai Super Kings with a handsome margin of seven wickets. After losing the toss, they were asked to field first. The way how their bowling unit performed in that match was just superb. They leaked just 125 runs in their inning of 20 overs. Six bowlers were used in the previous match and almost all bowlers from their side performed well in the previous match. Shreyas Gopal had an outstanding performance with the ball in the previous match. He picked one wicket in four over while he leaked 14 runs. Rahul Tewatia was the other economical bowler from their side who picked one wicket in his four overs bowled out against just 18 runs. Jofra Archer was the other bowler who performed well and picked one wicket in four overs while he was charged for 20 runs. Kartik Tyagi also picked one wicket in his four overs he leaked 35 runs. Ben Stokes and Ankit Rajpoot were the bowlers who failed to pick any wicket.

The batting order of Rajasthan Royals performed well in the previous match even losing three wickets early and in no time. Jos Buttler has moved the middle order and he had a superb performance at that position in the previous match. He scored 70(48) runs with the help of two huge sixes and seven boundaries and remained not out till the chase of the target. The skipper, Steven Smith also had a good performance in the previous match against CSK. He remained not out after scoring 26(34) and also smashed two boundaries. Ben Stokes scored 19(11) with the help of three boundaries while Robin Uthappa had just five runs to his name. Sanju Samson failed to open his account on the scoreboard and got out on the golden duck after facing just three deliveries. The batting order of Rajasthan Royals is strong and they had to play a key role in the next matches.

Sunrisers Hyderabad will be facing some challenges in this match against RR. Some key players of this team are facing injuries and Kane Williamson was unfit in the previous match and there is the possibility that he may miss this match. If this happens, this will be a huge loss for SRH as we had seen them in the struggle in middle overs while scoring the runs. Mohammad Nabi can replace Kane Williamson in this match. He is a good option in the all-rounding category as he is a good depth overs bowler and also a strong batsman. There will be also an interesting point that David Warner comes to open the inning of not. David Warner had successful batsmen in the middle overs and if he opens, it will not a good change and there will be a gap in the middle overs. He was excellent in the previous match with Bairstow. Vijay Shankar, Manish Pandey, or Priyam Garg are not the batsmen of that caliber. We had observed in the previous matches that SRH had won the matches which were near to close. SRH is also poor when it comes to the bowling department. Rashid Khan had been outstanding but KKR proved in the previous match that runs can be scored against him.

Sunrisers Hyderabad had not performed in this season of the IPL T20 as many of us were expecting. They had played a total of nine matches with three wins to their name. They had lost six matches and are holding the 7th position on the points table. They were beaten by Kolkata Knight Riders in their most recent match. That was a tied match and was decided in the super over. They won the toss and decided to field first. The performance of their bowing unit was average in that match. They leaked 163 runs in their inning of 20 overs. T Natarajan was the highest wicket-taker from their side but he leaked plenty of runs. He picked two wickets in his four overs bowled out against 40 runs. Vijay Shankar was the most economical bowler from their side who picked one wicket in his four overs bowled out while he leaked just 20 runs. Basil Thampi picked one wicket in his four overs bowled out while he was charged for 46 runs. Rashid Khan picked one wicket in four overs against 28 runs while Sandeep Sharma was the only bowler from their side who failed to pick any wicket.

Sunrisers Hyderabad is full of experienced and young players in the t20 format. The batting order of this team is also strong and some well-known hitter of the t20 format is the part of the squad of this team, so the winning chances of today match for Sunrisers Hyderabad have been increased. The equation of who will win today’s cricket match prediction and who will win the cricket match today is mentioned as under.

The 40th Match of the Indian Premier League is going to be held at the Dubai International Cricket Stadium, Dubai. We had observed in the previous matches played here that the pitch here at this venue is good for batting. The track is slower than the others we have seen and helps the spinners quite a bit. We are hoping that the surface is bound to get slower and be a bit more difficult for batting in this match. A score of 180 is going to be tough to chase.

Dream11 fantasy team lineup prediction for Rajasthan Royals vs Sunrisers Hyderabad 40th Match IPL 2020. After checking the latest players’ availability, which players will be part of both teams, he possible tactics that the two teams might use as we had leaned from previous seasons of Indian Premier League to make the best possible Dream11 team.