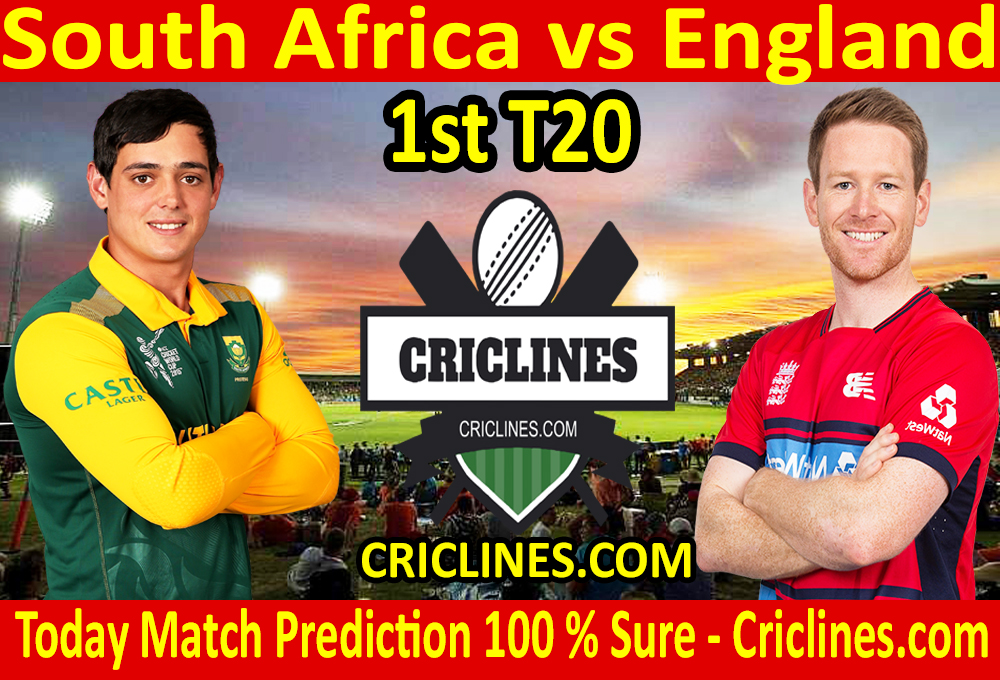 The cricket fans are ready to witness yet another big battle of T20 cricket. The 1st T20 match of England tour of South Africa, 2020 is scheduled to be held on Friday, 27th November 2020 at Newlands, Cape Town. We are providing 100 safe, perfect, and accurate today match prediction for all matches of South Africa and England.

South Africa was known as a strong cricket team in the world but since some past years, they had moved down in the ranking of the ICC. The main reason of this downfall is policies regarding the selection of black players. Quinton de Kock will leading team South Africa and also the batting order of this team. Faf du Plessis, Temba Bavuma, David Miller, Reeza Hendricks, and Janneman Malan are the leading batters of this team.

Quinton de Kock and Faf du Plessis had performed well in the Indian Premier League recently and are in excellent form. Andile Phehlukwayo and Dwaine Pretorious are the main all-rounders while Beuran Hendricks, Tabraiz Shamsi, Kagiso Rabada, and Anrich Nortje will be handling the bowling unit. Kagiso Rabada had been in superb form in the recent edition of the IPL and Anrich Nortje had also performed well in that tournament.

England cricket team is one of the strongest teams when it comes to the shorter format of cricket. The batting order of this team that had been selected for this series against South Africa is strong. Jason Roy, Ben Stokes, Jos Buttler, Jonny Bairstow, Sam Billings, Moeen Ali, Eoin Morgan, Dawid Malan are the key batters for England during this series.

Jofra Archer is a very good bowler when it comes to t20 cricket. He had given his best performance in the recent edition of the Indian Premier League. He will be leading the bowling unit of England with Tom Curran, Adil Rashid, and Chris Jordan.

South Africa had played a total of 121 T20 matches so far. They won 71 matches while other teams won 49 matches while their one match was ended with no result.

England had played 123 T20 International matches right now with 63 wins to their name. They had lost 55 matches while five matches were ended with no result.

South Africa had played 18 T20 matches against England where they won 9 while England had won 8 matches and one match between these two teams was ended with no result.

The 1st T20 match between South Africa and England is going to be played at Newlands, Cape Town. The pitch at this stadium is excellent for batting. The boundaries at this venue are short and will bring the spinners into play. The pitch will continue to be good for batting throughout the match.

Who Will Win South Africa vs England 1st T20

Who Will Win South Africa vs England 1st T20 Match-ENG