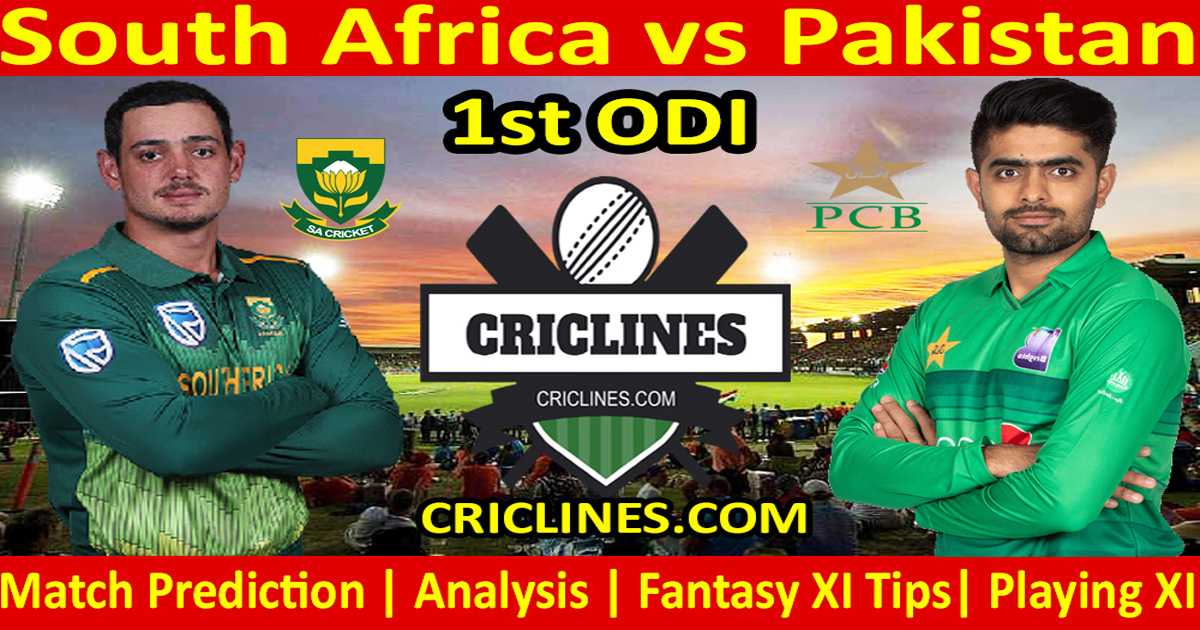 The cricket fans are ready to witness yet another big battle of the ODI cricket. The 1st ODI match of the Pakistan tour of South Africa is scheduled to be held on Friday, 2nd April 2021 at SuperSport Park, Centurion. We are posting safe, secure, and accurate today match prediction of all matches of Pakistan and South Africa.

JJ Smuts, Andile Phehlukwayo, Sisanda Magala, Wiaan Mulder, and Lizaad Williams are the all-rounders who are part of this team. Quinton de Kock, Heinrich Klaasen, and Kyle Verreynne are the wicket keeper batsmen in the South Africa team. The bowling department of South Africa is also strong as compared to team Pakistan. Beuran Hendricks, Keshav Maharaj, Lungi Ngidi, Anrich Nortje, Kagiso Rabada, Tabraiz Shamsi, Junior Dala, Lutho Sipamla, and Daryn Dupavillon are the key bowlers who are available for the selection in the final playing eleven.

Pakistan had recently beaten South Africa in the Test and T20 series. Now, this series of ODI and T20 matches is a big test for team Pakistan to get a good combination for the upcoming world cup. Babar Azam will be leading the Pakistan team during this series. The batting order of Pakistan looks strong at least on papers. Fakhar Zaman is back on the team after a long time. Imam ul Haq is part of the squad of the Pakistan team.

Abdullah Shafique, Haider Ali, and Asif Ali will be leading the batting order of Pakistan with Fakhar Zaman, Imam ul Haq, and the skipper, Babar Azam. Pakistan has a lot of experienced all-rounders in the squad. Usman Qadar, Danish Aziz, Faheem Ashraf, Mohammad Nawaz, Mohammad Wasim Jr, and Shadab Khan are the key all-rounders in the final squad of team Pakistan. Mohammad Rizwan and Sarfraz Ahmed are wicket-keeper batsmen in the team. The bowling department of Pakistan is also strong and experienced. Haris Rauf, Hasan Ali, Mohammad Hasnain, and Shaheen Afridi will be leading the bowling department of Pakistan.

South Africa had played a total of 625 ODI matches where they won 385 and Opposing teams won 216 matches. Their 18 matches ended with no result and six matches were tied.

The 1st match of this series and scheduled to be held at SuperSport Park, Centurion. Pitch here in this stadium is a batting favored and with a little bit of bounce that may help the seamers. Spinners can play a key role in this pitch. A score of near about 280 runs should be as par.

The weather forecast for Centurion is not good for this match. There are some chances of rain and that is possible that we may have a short match.

Who Will Win South Africa vs Pakistan 1st ODI

Who Will Win South Africa vs Pakistan 1st ODI Toss-PAK

Who Will Win South Africa vs Pakistan 1st ODI Match-PAK