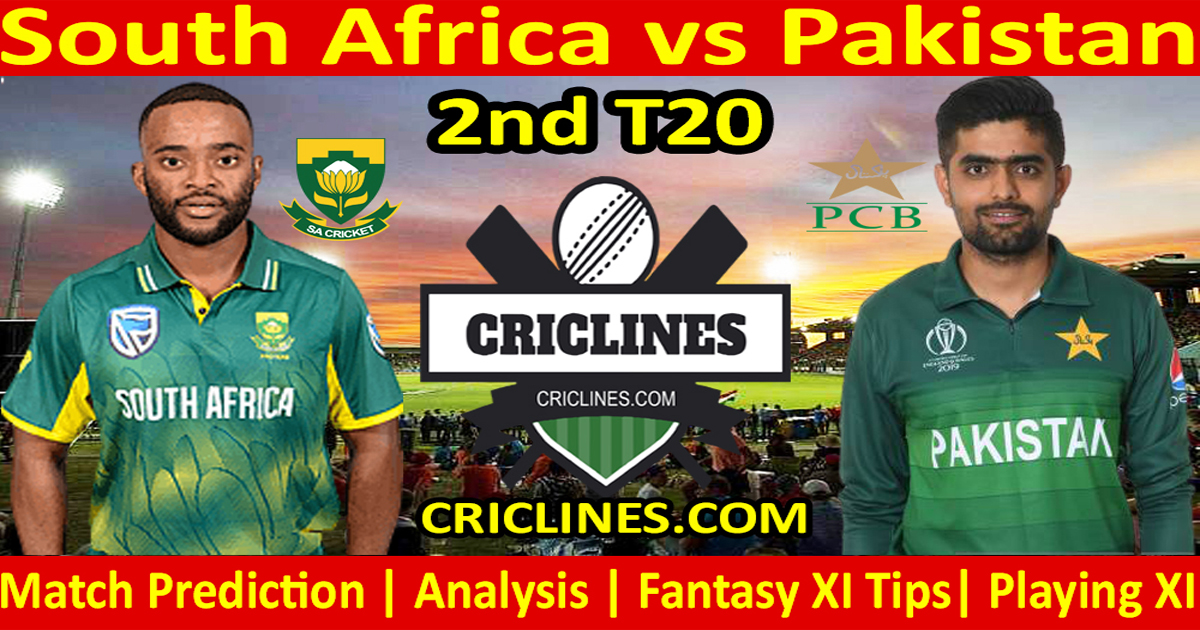 The world is ready to witness yet another big battle of T20 cricket. The 2nd T20 match of Pakistan tour of South Africa is scheduled to be held on Monday, 12th April 2021 at The Wanderers Stadium, Johannesburg. We are posting safe, secure, and accurate today match prediction of all matches of Pakistan and South Africa.

South Africa lost the opening but what a performance by their batting order. They won the toss and decided to bat first. A total of 188 runs on the board was easy to defend but that did not happen. Markram was the highest run-scorer from their side who scored 51 runs on 32 deliveries with the help of eight boundaries and one-six. The skipper, Klaasen also had an outstanding performance with the bat. He smashed the inning of 50 runs on just 28 balls with the help of two boundaries and four huge sixes. Pite van Biljon scored 34 runs while Janneman Malan had 24 runs to his name.

The poor bowling performance was the key reason why South Africa lost the opening t20 match. They leaked the target of 189 runs in 19.5 overs. Beuran Hendricks was the highest wicket-taker from their side who picked three wickets in his four overs bowled out against 32 runs. Tabraiz Shamsi also had an outstanding performance with the ball. He picked two wickets in his four overs bowled out while he was charged for 29 runs. Lizaad Williams had one wicket to his name while George Linde, Sisanda Magala, and Andile Phehlukwayo were the bowler who failed to pick any wicket in the first t20 match.

Pakistan won the opening t20 match of this series of four matches after chasing the highest total in their t20 history. The bowling department of Pakistan almost failed to give the best performance in that match. They leaked 188 runs in their inning of 20 overs. Mohammad Nawaz was the only successful bowler who picked two wickets in his four overs bowled out against 21 runs. Hasan Ali also picked two wickets while he was charged for 28 runs in this four overs bowled out. Haris Rauf and Shaheen Afridi picked one wicket each. Shaheen Afridi leaked 45 runs in his four overs bowled out. Usman Qadir and Faheem Ashraf were the bowlers who failed to pick any wicket.

The way how the batting order of Pakistan performed in the previous match was just outstanding. They chased the target of 189 runs in 19.5 overs. That was the highest total they had chased ever. Mohammad Rizwan once again had an outstanding performance with the bat. He was the highest run-scorer from Pakistan’s side who remained not out after scoring 74 runs. He faced 50 deliveries and smashed nine boundaries and two sixes during his inning. Faheem Ashraf smashed the inning of 30 runs on just 14 deliveries with the help of four boundaries and one six. Fakhar Zaman scored 27 runs while the skipper, Babar Azam could manage to score 14 runs.

South Africa had a total of 128 T20 matches to his account. They won 72 matches while opposing teams won 55 matches while their one match was ended with no result.

Pakistan had played 164 T20 matches so far. They won 101 matches while opposing teams won 61 matches Two matches of Pakistan were ended with no result. Rember that Pakistan is the only team that had won 100 t20 matches.

The 3rd match of this series and scheduled to be held at Wanderers Stadium, Johannesburg. Pitch here in this stadium is a batting favored and with a little bit of bounce that may help the seamers. Spinners can play a key role in this pitch. A score of near about 180 runs should be as par.

The weather forecast for Johannesburg is good for this match. There are some chances of rain and that is possible that we may have a short match.

Who Will Win South Africa vs Pakistan 2nd T20

Who Will Win South Africa vs Pakistan 2nd T20 Toss-PAK

Who Will Win South Africa vs Pakistan 2nd T20 Match-RSA