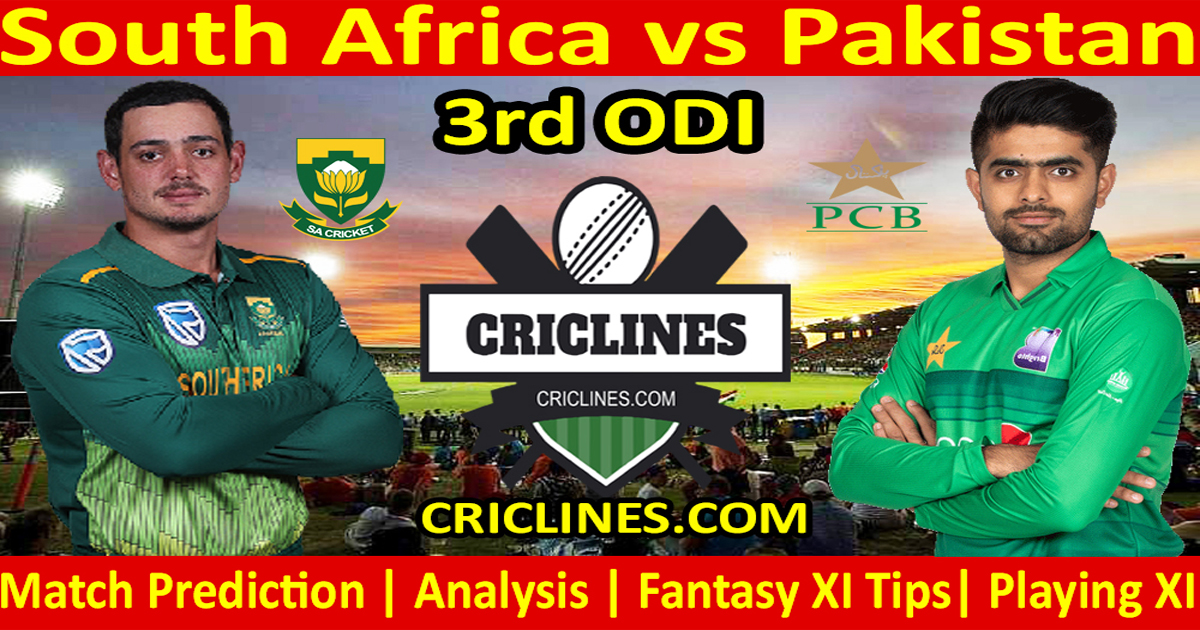 The world is ready to witness yet another big battle of ODI cricket. The 3rd ODI match of the Pakistan tour of South Africa is scheduled to be held on Wednesday, 7th April 2021 at SuperSport Park, Centurion. We are posting safe, secure, and accurate today match prediction of all matches of Pakistan and South Africa.

South Africa won the second match but they are going to face a lot of issues in the third and final match of this series. This match will test the depth of team South Africa. The key five players of the team had left the national team and they will join IPL as their board had given permission. David Miller, Kagiso Rabada, Lungi Ngidi, Anrich Nortje, and Quinton de Kock will not available in playing eleven. Now, South Africa will play this match without their key batsmen and bowlers. We think that Janneman Malan will open the inning for South Africa. He is a young and very good batsman. Junio Dala, Lutho Sipamla, and Beuran Hendricks will get the place in the playing eleven. One player from JJ Smuts and Wiaan Mulde will also get the chance in the final playing eleven.

Even the key players of team South Africa are not available but we can’t take this team an easy team. Still, they have the ability to face the strong bowling unit of Pakistan. Klaasen, van der Dussen, Bavuma, and Markram have the ability to hand the batting and bowling unit. Let’s talk about the second ODI match which ended at the last ball of the 50th over. The batting order of South Africa performed well and scored a total of 342 runs in their inning of 50 overs. The skipper, Bavuma was the highest run-scorer who scored 92 runs on 102 deliveries with the help of nine boundaries. Quinton de Kock also performed well and scored 80 runs. He faced 86 balls and smashed 10 boundaries and one six. David Miller smashed the inning of 50 runs on just 27 balls. Anrich Nortje picked two wickets while Andile Phehlukwayo had two wickets to his name.

Pakistan lost the second match by a low margin but we can’t say that they performed well overall. It was Fakhar Zaman who took Pakistan to the last over. First, the bowling unit of Pakistan failed to give the best performance. They could not stop the batting order of South Africa from scoring the runs. They leaked 342 runs in their inning of 50 overs. Haris Rauf was the most successful and highest wicket-taker from their side who picked three wickets in his 10 overs bowled out against 54 runs. Shaheen Afridi, Mohammad Hasnain, and Faheem Ashraf picked one wicket each. Shadab Khan and Danish Aziz once again failed to pick any wicket.

The performance of the batting order of Pakistan was not impressive except for Fakhar Zaman who scored 193 runs on 154 deliveries with the help of 18 boundaries and 10 sixes. The skipper, Babar Azam scored 31 runs while Asif Ali could manage to score 19 runs. No other batsmen from their side could put some big runs on the board. Pakistan will make some key changes in their final squad for this ODI match. Shadab Khan got injured in the previous match and he is now out of this series and also from the T20 series and it is possible that Mohammad Nawaz will replace him. We are also not seeing Danish Aziz in this match. Maybe Hassan Ali will take his place. Asif Ali will also be replaced with Haidar Ali in our opinion.

South Africa had played a total of 627 ODI matches where they won 386 and Opposing teams won 217 matches. Their 18 matches ended with no result and six matches were tied.

The 3rd match of this series and scheduled to be held at SuperSport Park, Centurion. Pitch here in this stadium is a batting favored and with a little bit of bounce that may help the seamers. Spinners can play a key role in this pitch. A score of near about 280 runs should be as par.

The weather forecast for Centurion is not good for this match. There are some chances of rain and that is possible that we may have a short match.

Who Will Win South Africa vs Pakistan 3rd ODI

Who Will Win South Africa vs Pakistan 3rd ODI Toss-RSA

Who Will Win South Africa vs Pakistan 3rd ODI Match-PAK

Will Be updated shortly.