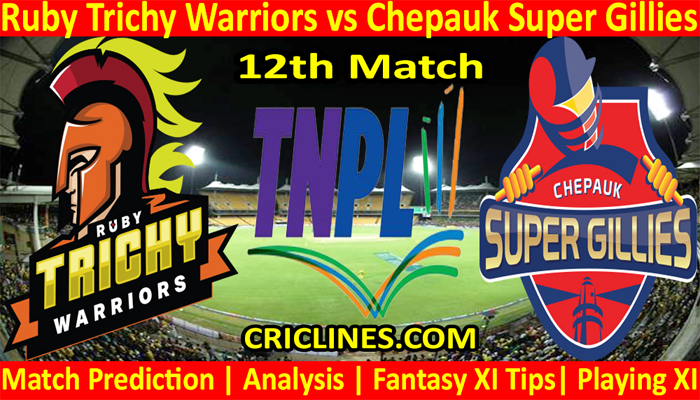 The world is ready to witness yet another big battle of the TNPL T20 League. The 12th match of Tamil Nadu Premier League 2022 is scheduled to play between Ruby Trichy Warriors and Chepauk Super Gillies on Wednesday 6th July 2022 at NPR College Ground, Dindigul. We are posting safe, accurate, and secure today match prediction of TNPL.

Ruby Trichy Warriors and Chepauk Super Gillies are going to face each other in this 12th match of the Tamil Nadu Premier League. The performance of Ruby Trichy Warriors had been average in this tournament till now. RTW had played a total of two matches with one win and the other lost. They are holding the 4th position on the points table. They were beaten by IDream Tiruppur Tamizhans in their previous match. On the other side, Chepauk Super Gillies had totally failed to give the best performance in this tournament. They had played a total of two matches and are still searching for a win as they had lost their both played matches and are laying at the second lost position on the points table.

Most matches in TNPL 2022 had been low scoring. The previous match of Ruby Trichy Warriors against IDream Tiruppur Tamizhans was a big example of it. RTW has a good batting order on their side but they were not good in the previous match. They could manage to score 157 runs in 20 overs. Amit Sathvik and Murli Vijay are opening the batting inning for Ruby Trichy Warriors while Nidhish Rajagopal, Adithya Ganesh, Adnan Khan, Antony Dhas, Saravana Kumar, and M Mathivannan are available to handle the middle and lower batting order. Murli Vijay was the most successful and highest run-scorer in the previous match with 34 runs on just 16 balls with the help of six boundaries and one huge six. Amit Sathvik also performed well and scored 26 runs. Mathivannan remained not out after scoring 27 runs. He faced 18 balls and smashed two boundaries and the same huge sixes.

The bowling department of Ruby Trichy Warriors totally failed to give the best performance in the previous match. They could not defend the target of 158 runs and leaked this target in 18.5 overs. Ajay Krishna, P Saravana Kumar, M Mathivannan, M Poiyamozhi, Antony Dhas, and the skipper, Rahil Shah is the leading bowlers of Ruby Trichy Warriors. P Saravana Kumar was the highest wicket-taking bowler but he also leaked a lot of runs. He picked three wickets in 3.5 overs while he was charged for 44 runs. M Mathivannan was the most successful bowler we can say in the previous match. He picked two wickets while against just 20 runs. M Poiyamozhi picked one wicket while Antony Dhas, Rahil Shah, and Ajay Krishna were the bowlers who could not manage to pick any wicket.

Chepauk Super Gillies had not a good start as their opening match against Nellai Royal Kings was tied which they lost in the super over. They were not good in the next match against Madurai Panthers where they lost very comprehensively. N Jagadeesan is the star player of CSG we don’t think that he had given the performance as many of us were expecting. Kaushik Gandhi had a fifty to his name and he should put some big runs on the board in this match. U Sasidev is the other player who needs to give the best performance in the next matches. Harish Kumar and Sonu Yadav had added extra power to the squad of Chepauk Super Gillies. The batting department of CSG is very strong and experienced and they also have the advantage in terms of batting firepower.

The pitch at the NPR College Ground, Dindigul has some bounce and this is good news for the bowlers of Chepauk Super Gillies like Sandeep Warrier, Manimaran Siddharth, Sonu Yadav, R Alexander, Kaushik Gandhi, and S Harish Kumar. We are sure that they will give a tough time to the batters of Ruby Trichy Warriors. R Alexander proved the most successful bowler in the most recent match with three wickets to his name in four overs against just 20 runs. Sandeep Warrier and the skipper, Kaushik Gandhi picked one wicket each while Manimaran Siddharth, S Harish Kumar, and Sonu Yadav were the bowlers who could not manage to pick any wicket. Our today prediction confirms that R Alexander will be the highest wicket-taker in this match.

The 12th Match match of Tamil Nadu Premier League season 2022 is scheduled to be held at NPR College Ground, Dindigul. The pitch here at this venue is flat and good for batting as there is no bounce and pace. Out-field on this venue is very fast and the ball will travel to the boundary very quickly. It also has a lot of help for the spin bowlers but almost all teams in this tournament have a strong batting order so this does not matter. According to the live cricket score, a total of 180 runs should be a par score.

While we had a deep look at the squad, we think that Chepauk Super Gillies is going to perform well in this match the TNPL T20 season 7 as they have a couple of players who can change the game. In this match, the batting department of the Chepauk Super Gillies is much stronger as compared to the Ruby Trichy Warriors. We also have reports from different sources for the win of the DDS.