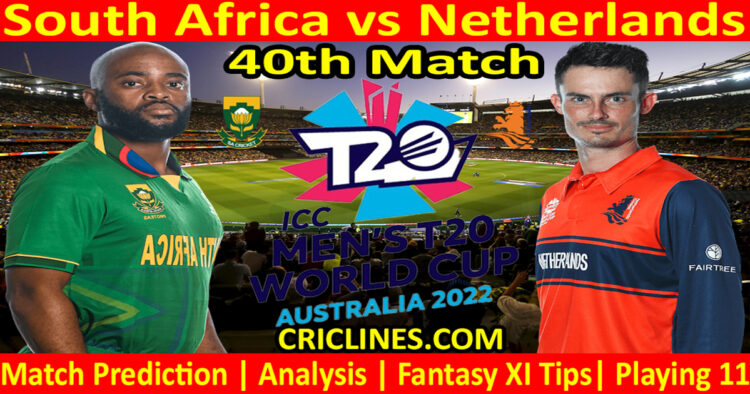 The world is ready to witness yet another big battle of World Cup T20. The 40th match of World Cup T20 2022 is scheduled to play between South Africa and Netherlands on Sunday, 6th November 2022 at Adelaide Oval, Adelaide. We are posting a safe, accurate, and secure today match prediction for ICC T20 World Cup 2022.

A total of three matches of Super 12 Group 2 will be played today and these matches will decide the teams who will qualify for the semi-finals as no team had qualified right now for the next round of ICC T20 World Cup 2022. Netherlands is the only team that had been ruled out from their tournament. South Africa is currently holding the second position on the points table of Super 12 Group 2. They had played four matches with two wins to their name. They had lost a match while their one match was washed out by the rain.

Netherlands qualified for super 12 for the first time in their cricket history. They were good in qualifier matches and won two out of three matches played. They beat Sri Lanka which is a test-playing nation but they failed to give the best performance in the Super 12. They had also played four matches with just one win to their name. They had lost three matches and are laying at the bottom of Super 12 Group 2. They had beaten Zimbabwe but lost their matches against India, Pakistan, and Bangladesh.

South Africa beat India in the match played earlier but was beaten by Pakistan in their very next match even though that was a rain-affected match and the second inning of this match was reduced to 14 overs. They lost the toss and were asked to field first. The bowling unit of this team had a good start and picked four key wickets for Pakistan on a total of just 43 runs in 2.3 overs but they were not good in the middle overs and that was a key reason why they leaked a lot of runs. They were charged for 185 runs in 20 overs. Anrich Nortje was the most successful bowler from their side who picked four wickets in four overs but he leaked a lot of runs. He was charged with 41 runs. Wayne Parnell proved the most economical bowler from their side picking one wicket in four overs against 31 runs. Lungi Ngidi was the other bowler with one wicket to his name in four overs while he was charged with 32 runs.

Tabraiz Shamsi leaked 36 runs in four overs and picked one wicket. Kagiso Rabada was the most expensive bowler who had a wicket to his in four overs against 44 runs. The batting order of South Africa totally collapsed in the previous match and scored just 108 runs in 14 overs while chasing the target of 142 runs. The skipper, Temba Bavuma was the most successful batter from their side scoring 36 runs on just 19 balls with the help of four boundaries and one huge six. Aiden Markram scored 20 runs. He faced 14 balls and smashed four boundaries. Tristan Stubbs scored 18 runs while Heinrich Klaasen had 15 runs to his name. No other batter from their side could even enter into the double figure. Quinton de Kock had performed well in this tournament but he failed to open the account on the scoreboard and went back to the pavilion on a golden duck. Anrich Nortje, Kagiso Rabada, and Tabraiz Shamsi could manage to score just one run.

Netherlands lost three matches in a row but won the next match against Zimbabwe with a handsome margin of five wickets. They lost the toss and were asked to field first. The way how their bowling unit performed in the previous match was just outstanding. They leaked 117 runs and send the full team of Zimbabwe back to the pavilion in 19.2 overs. Almost all bowlers from their side performed well. Paul van Meekeren was the most successful and highest wicket-taker from their side who picked three wickets in four overs against 29 runs. Bas de Leede was the most economical bowler from their side who picked two wickets in four overs while he was charged with 14 runs. Logan van Beek was the other bowler with two wickets to his name in 2.2 overs against 17 runs.

Brandon Glover was the other bowler with two wickets to his name in four overs while he was charged for 29 runs. Fred Klaassen picked one wicket Roelof van der Merwe was the only bowler from their side who failed to pick any wicket. The batting order of Netherlands also performed well and chased the target of 118 runs in 18 overs. Max ODowd was the most successful and highest run-scorer from their side who scored 52 runs on 47 balls with the help of eight boundaries and one huge six. Tom Cooper was the other batter who put some runs on the board. He scored 32 runs while he faced 29 balls and smashed two boundaries and one huge six during his inning. Bas de Leede remained not out after scoring 12 runs. This is a big opportunity for Netherlands to play a strong and experienced team like South Africa to get some experience.

South Africa had played just one match against Netherlands and they won that match with a handsome margin of 6 runs.

South Africa is full of experienced and young players in the t20 format. The batting order of this team is also strong and some well-known hitters of the t20 format are part of the squad of this team, so the winning chances of today’s match for South Africa have been increased. The equation of who will win today’s cricket match prediction and who will win the cricket match today is mentioned as under.

The 40th match of World Cup T20 2022 is going to be held at Adelaide Oval, Adelaide. We had observed in the previous matches played here that the pitch here at this venue is good for batting. The pitch is bouncy and fast and run-scoring is not much easy in early and middle overs. We are hoping that the surface is bound to get slower and be a bit more difficult for batting in this match. A score of 170 is going to be tough to chase.

Quinton de Kock, Anrich Nortje, and Max ODowd are key players to watch in this match.