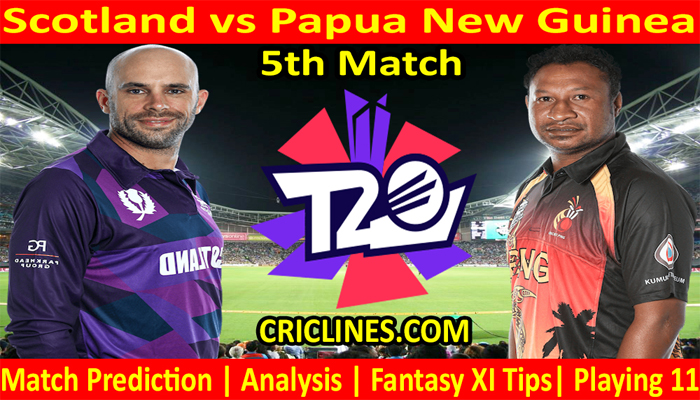 The world is ready to witness yet another big battle of World Cup T20. The 5th Match of World Cup T20 2021 is scheduled to play between Scotland and Papua New Guinea on Tuesday, 19th October 2021 at Al Amerat Cricket Ground (Ministry Turf 1), Al Amerat. We are posting safe, accurate, and secure today match prediction of World Cup free.

Scotland had a smashing start to this big event of cricket and beaten the favorite team Bangladesh even after having a poot batting start. They have to beat Papua New Guinea who had lost their very first match of this tournament against Oman. This match is going to be very interesting as both teams are playing good cricket.

Scotland had a poor batting start as they lost the toss and were asked to bat first by Bangladesh. They lost their key six batsmen on the total of just 56 runs but the partnership between Chris Greaves and Mark Watt helped this team to score a total of 140 runs on the board in their inning of 20 overs. Chris Greaves was the highest run-scorer from their side who scored 45 runs on 28 balls with the help of four boundaries and two huge sixes. George Munsey scored 29 runs while Mark Watt could manage to score 22 runs.

The way how the bowling unit of Scotland performed in their very first match of this big event of cricket was just outstanding. They defended the target of 141 runs and leaked 134 runs in their inning of 20 overs. Bradley Wheal was the most successful and highest wicket-taker from their side who picked three wickets in his four overs bowled out while he was charged for 24 runs. Chris Greaves picked two wickets in his three overs bowled out against 19 runs.

Papua New Guinea had lost their first match against Oman by a handsome margin of 10 wickets. The batting order of this team failed to put a big total on the board. They could manage to score 129 runs in their inning of 20 overs. Remember that they lost their both openers on a total of zero scores. Assad Vala was the most successful and highest run-scorer from their side who scored 56 runs on 43 balls with the help of four boundaries and three huge sixes. Charles Amini scored 37 runs while he faced 26 deliveries and smashed four boundaries and one huge six during his inning.

The bowling department of Papua New Guinea totally failed to perform well in the previous match. They failed to defend a low target of 130 runs on the board and leaked this target in 13.4 overs. No bowler from their side could manage to pick any wicket even they used seven bowlers in this match. Kabua Morea, Damien Ravu, Nosaina Pokana, Simon Atai, Charles Amini, Assad Vala, and Lega Siaka were the bowlers who remained wicketless.

Assad Vala, Chris Greaves, and Bradley Wheal are key players to watch in this match.

The 5th Match match of World Cup T20 2020-21 is going to be held at Al Amerat Cricket Ground (Ministry Turf 1), Al Amerat. We had observed in the previous matches played here that the pitch here at this venue is good for batting. The track is slower than the others we have seen and helps the spinners quite a bit. We are hoping that the surface is bound to get slower and be a bit more difficult for batting in this match. A score of 180 is going to be tough to chase.

Dream11 fantasy team between SCO vs PNG will be updated shortly.