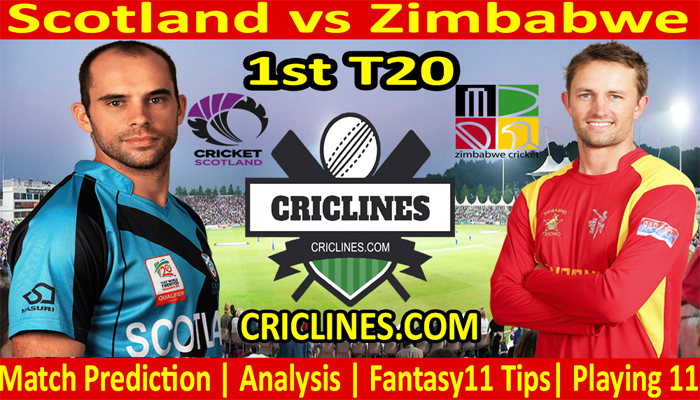 The cricket fans are ready to witness yet another big battle of T20 cricket. The 1st T20 match of Zimbabwe tour of Scotland, 2021 is scheduled to be held on Wednesday, 15th September 2021 at Grange Cricket Club, Edinburgh. We are posting 100 safe, perfect, and accurate today match predictions for all matches of Scotland and Zimbabwe.

Zimbabwe was on the tour of Ireland recently where they played a series of 5 T20 and 3 ODI matches. They lost the T20 series with 3-2 and the ODI series between Ireland and Zimbabwe was tied with 1-1. Now they are going to face Scotland in the series of 3 T20 matches. Scotland is going to play any T20 series after a long time. They played their last T20 match back in 2019 against Oman in the World Cup Qualifier series.

Scotland is going to play an important series of three-match at their home venues against Zimbabwe. Scotland has to prepare for the World Cup as they will face Bangladesh in their very first match of the big event of T20 cricket. This series will also help Scotland to get the best players for the playing eleven for the World Cup matches. Kyle Coetzer is going to lead Scotland in this home series against Zimbabwe. Dylan Budge, Ollie Hairs, and George Munsey are the key batters for Scotland.

Scotland has some best batting all-rounders in their squad. Richie Berrington, Michael Leask, and Calum MacLeod are the batting all-rounder while Matthew Cross and Craig Wallace are the wicket-keeper batsmen in the squad of Scotland. The bowling squad of Scotland is young and un-experienced. Chris Greaves, Gavin Main, Adrian Neill, Safyaan Sharif, Chris Sole, Hamza Tahir, and Mark Watt are key bowlers in the team of Scotland.

Zimbabwe lost the T20 series against Ireland but they performed well as many of us were not expecting. Now they are going to face a young and un-experienced team. Craig Ervine will be leading Zimbabwe in this series. Tinashe Kamunhukamwe, Tarisai Musakanda, Dion Myers, and Milton Shumba will be leading the batting order of Zimbabwe in this tour of Scotland.

Scotland had played a total of 65 T20 matches where they won 29 matches and opposing teams won 33 matches. Their 3 matches were ended with no result and 1 match was tied.

Zimbabwe had played a total of 93 T20 matches so far. They won 24 while other teams won 69 matches.

Scotland had played just one T20 match against Zimbabwe which they lost by the margin of 11 runs back in 2016.

Scotland had not played much T20 cricket but they have good records and they had won 50 percent of matches played. We have no doubt that Scotland is the best team when we compare it with Zimbabwe. They have strong batting order and bowling unit, so the winning chances of Scotland for today’s match have been increased. The equation of winning chances of both teams for today’s match is mentioned as under.

The 1st T20 match between Scotland and Zimbabwe is going to be played at Grange Cricket Club, Edinburgh. This is one of the biggest venues in Scotland in terms of crowd capacity. The pitch on this venue is good for batting. It also has a bit of help for the spin bowlers. As per the live cricket score, a total of 170 runs should be a par score.

Sikandar Raza also had been outstanding in the previous series against Ireland. We think that these three players will be key players to watch in this match.

Who Will Win Scotland vs Zimbabwe 1st T20

Who Will Win Scotland vs Zimbabwe 1st T20 Toss-SCO

Who Will Win Scotland vs Zimbabwe 1st T20 Match-ZIM