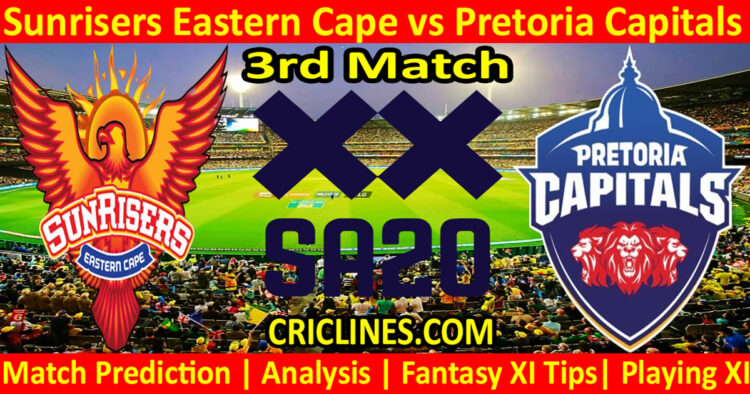 The world is ready to witness yet another big battle of the SA20 2023. The 3rd match of the SA20 T20 League 2023 is scheduled to play between Sunrisers Eastern Cape and Pretoria Capitals on Thursday, 12th January 2023 at St George’s Park, Gqeberha. We are posting safe, accurate, and 100% secure today match prediction of SA20 T20 2023 with live SA20 scores and ball by ball updates with prediction.

Pretoria Capitals are owned by Delhi Capitals and JSW Group. Graham Ford is the head coach of this team while Wayne Parnell will be leading this team. Pretoria Capitals had been allocated Centurion Park, Centurion as their home ground. This team is a combination of the best batsmen and bowlers.

Aiden Markram is going to lead Sunrisers Eastern Cape in this tournament. He is one of the best batsmen on the national team of South Africa. He also has a lot of experience in T20 cricket and we are hoping that he will prove the best performer on this side. Sarel Erwee, Marquez Ackermann, and Tristian Stubbs are other regular batsmen of Sunrisers Eastern Cape. Roelof Van Der Merwe, Marco Jansen, and JJ Smuts are batting all-rounder of this team.

The bowling unit of Sunrisers Eastern Cape is also strong at least on paper. Marco Jansen, Sisanda Magala, and Ottniel Baartmaan are the main bowlers of this team and will also the help of bowling all-ronders like Roelof Van Der Merwe and JJ Smuts. James Fuller is also part of the bowling squad of this team and we are hopeful that he will play this match. Mason Crane is another experienced bowler of the T20 format of cricket and had been good in domestic cricket. Can these bowlers stop the batting orders of other strong teams in this tournament? we will have the answer to this question after this match.

Pretoria Capitals are a strong batting team in this inaugural edition of the SA20 League. Wayne Parnell is an experienced batsman from South Africa and he will be leading the Capitals. He will also handle the top batting order of this team with Wayne Parnell, Will Jacks, and Cameron Delport. This is a strong top batting order and will have the help of James Neesham, Thenis De Bruyn, and Phil Salt in the middle batting order. Pretoria Capitals have more firepower in the batting order and can destroy any strong bowling unit of any team of this tournament.

Pretoria Capitals are also rich in the bowling department. Anrich Nortje will be leading the bowling unit of this team. He is an experienced bowler and had played 29 T20Is for South Africa with 35 wickets to his name. He also had played in 30 IPL matches where he picked 43 wickets with an economy of 8.06. Miguel Pretorius, Joshua Little, Adil Rashid, and Senuran Muthusamy are also part of the bowling squad of Pretoria Capitals. Shaun Von Berg is another bowler in the squad of the Capitals. They are a strong side and we are sure that they will have a winning start to this first season of the SA20 League.

Pretoria Capitals is overall a strong team when we compare it with Sunrisers Eastern Cape. They have the best players of the t20 format of cricket. The batting order of this team is also strong and some well-known hitters of the t20 format are part of the squad of this team, so the winning chances of today’s match for Pretoria Capitals have been increased. The equation of who will win today’s cricket match prediction and who will win the cricket match today is mentioned as under.

The 3rd match of SA20 T20, 2023 is going to be held at St George’s Park, Gqeberha. We had observed in the previous matches played here that the pitch here at this venue is good for batting in early overs. The track has a good amount of pace and bounce which allows the batsmen for the good cricketing shorts but this ground also have big boundaries which can be a plus point for the bowlers. A score of 190 plus seems to be a par score.

The weather forecast for Gqeberha is good for this cricket match. There are almost no chances of rain in the region and we are hopeful that we will have a full match to enjoy.

Anrich Nortje, Rilee Rossouw, and Aiden Markram are key players to watch in this match.

Dream11 fantasy team lineup prediction for Sunrisers Eastern Cape vs Pretoria Capitals 3rd Match SA20 2023. After checking the latest player’s availability, which players will be part of both teams, and the possible tactics that the two teams might use as we had learned from previous seasons of SA20 T20 League to make the best possible Dream11 team.

We had provided you with the above-mentioned today prediction on the basis of our research, understanding, and analysis. These prediction tips have also been based on the reports that we have from our different sources. You can consider the point we had provided you and the final decision will be yours that you have to make at your own risk.