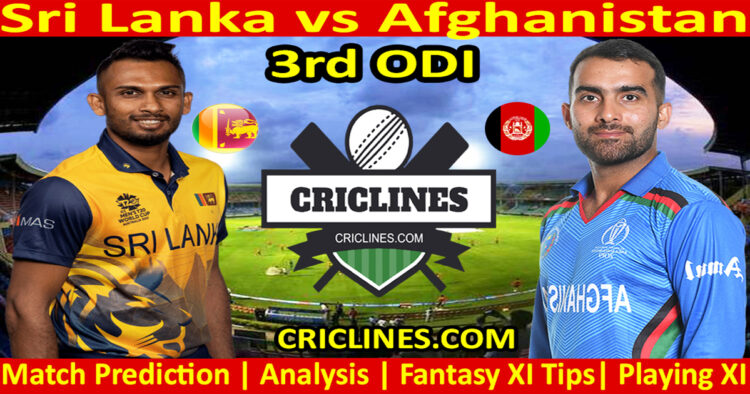 The cricket fans are ready to witness yet another big battle of ODI cricket. The 3rd ODI match of the Afghanistan tour of Sri Lanka, 2022 is scheduled to be held on Sunday, 27th November 2022 at Pallekele International Cricket Stadium, Pallekele. We are providing 100 safe, perfect, and accurate today match prediction of Sri Lanka and Afghanistan.

The second ODI match of the Afghanistan tour of Sri Lanka was washed out by the rain and came without any result. Now Afghanistan is leading this series of three matches and it is for sure that they will not lose this series. Afghanistan has to win this match to have a whitewash against the home side. Remember that Afghanistan was not good in the second ODI uncompleted match where they scored a low total on the board.

Sri Lanka was not good in the first match of this three matches series and performed well in the second match which was not decided. Sri Lanka was in the winning position. Sri Lanka has to win this match at any cost to level the series otherwise, they will face a clean sweep in the home series. We are sure that Sri Lanka will perform well and win this match.

Sri Lanka lost the opening match but performed well in the second ODI match which was not decided. They Lost the toss and were asked to field first. The performance of their bowling unit was good. They leaked just 228 runs and send the full team of Afghanistan back to the pavilion in 48.2 overs. They used six bowlers and almost all bowlers from their side performed well. Kasun Rajitha was the most successful and highest wicket-taker from their side with three wickets to his name in nine overs against just 31 runs. M Theekshana also performed well and picked two wickets in 10 overs against 49 runs. Lahiru Kumara was the other bowler who had wickets to his name. He picked up two wickets while he was charged with 50 runs in 6.2 overs. Dhananjaya de Silva was the other bowler who was good with the ball. He also had a wicket to his name.

Dhananjaya de Silva picked one wicket in 10 overs against 37 runs. W Hasaranga also performed well and picked one wicket in 10 overs while he was charged for 39 runs. Dhananjaya Lakshan was the only bowler from their side who failed to pick any wicket in the previous match. The batting order of Sri Lanka had a good start and scored 10 runs in 2.4 overs when the match was stopped and it was finished without any result but they were not good in the first match where they scored 234 runs while chasing the target of 295 runs. Their full team came back to the pavilion in just 38 overs. Pathum Nissanka was the most successful and highest run-scorer from their side scoring 85 runs on 83 balls with the help of 10 boundaries. Wanindu Hasaranga was the other batter who put some big runs on the board. He scored 66 runs while he faced 46 balls and smashed 10 boundaries and two huge sixes. No other batter from their side could cross the figure of 20 runs. The skipper, Dasun Shanaka and Dhananjaya de Silva scored 16 runs each while Dinesh Chandimal could manage to score just 14 runs. Kusal Mendis had just one run to his name while Charith Asalanka could manage to score 10 runs. Sri Lanka will play with full force as they have to win this match at any cost.

Afghanistan performed well in the first match of this series but failed to give the best performance in the seco+nd ODI match. They won the toss and decided to bat first but the performance of their batting order was not much impressive. They could manage to score 228 runs and their full team came back to the pavilion in 48.2 overs. Remember that they scored 113 runs for the partnership of the second wicket. Rahmanullah Gurbaz was the most successful and highest run-scorer from their side with 68 runs to his name on 73 balls with the help of four boundaries and the same huge sixes. Rahmat Shah also had an outstanding performance with the bat and scored some runs on the board. He scored 58 runs while he faced 78 balls and smashed seven boundaries during his inning. The skipper, Hashmatullah Shahidi could manage to score just 28 runs while he destroyed 45 balls and smashed just two boundaries.

Mohammad Nabi was the other batter who put some runs on the board in the previous match. He scored 41 runs while he faced 34 boundaries and the same huge sixes. The bowling unit of Afghanistan was much tested in the second ODI but they were good in the first match where they defended the target of 295 runs and leaked 234 runs in 50 overs. Fazalhaq Farooqi was the most successful and highest wicket-taker from their side with four wickets to his name in nine overs against 49 runs. Gulbadin Naib also had an outstanding performance with the ball and picked three wickets in eight overs while he was charged with 34 runs. Yamin Ahmadzai was the other bowler who had some wickets to his name. He picked up two wickets while he leaked 46 runs in just six overs. Rashid Khan also performed well and picked one wicket in eight overs against 40 runs. Mujeeb Ur Rahman and Mohammad Nabi were the bowlers who failed to pick any wicket in the first ODI match. Afghanistan had to win this match to have this series to its name.

Sri Lanka had played a total of 879 ODI matches with 400 wins to their name. They had lost 435 matches while their 39 matches ended with no result and 5 matches were tied.

Afghanistan had played 140 One Day Internationals. They had won 70 matches and lost 65 matches. Their 4 matches ended with no results and 1 match was tied.

Sri Lanka had played 6 ODI matches against Afghanistan where they won 3 matches while Afghanistan won two matches. One match between these two teams was not decided.

The 3rd ODI match between Sri Lanka and Afghanistan is going to be played at Pallekele International Cricket Stadium, Pallekele. The pitch at this stadium is excellent for batting. The boundaries at this venue are short and will bring the spinners into play. The pitch will continue to be good for batting throughout the match.

The weather forecast in Pallekele on match day is good. There are almost no chances of rain and we should have a full match.

Who Will Win Sri Lanka vs Afghanistan 3rd ODI

Who Will Win Sri Lanka vs Afghanistan 3rd ODI Toss-AFG

Who Will Win Sri Lanka vs Afghanistan 3rd ODI Match-SL

Dream11 prediction for Sri Lanka vs Afghanistan. After checking the latest player’s availability, the Dream 11 Team for this match of Sri Lanka and Afghanistan is mentioned under.