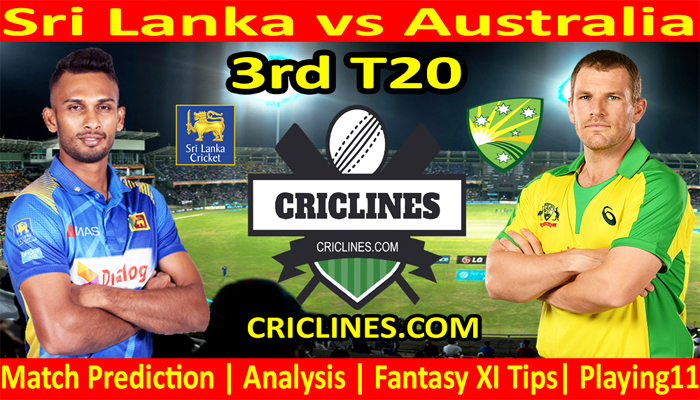 The cricket fans are ready to witness a big battle of the T20 cricket. The 3rd T20 match of the Australia tour of Sri Lanka, 2022 is scheduled to play on Saturday, 11th June 2022 at Pallekele International Cricket Stadium, Pallekele. We are posting safe, perfect, secure, and accurate today match prediction for the Australia tour of Sri Lanka, in 2022.

This T20 series between Australia and Sri Lanka is now moving from Colombo to Pallekele. Australia had been just outstanding in this tour of Sri Lanka and already had won the series of three T20 matches and a win in this match will clear the road for Australia to the whitewash against Sri Lanka. Australia had been just outstanding in each and every department of the game. Sri Lanka is playing at their home venue but they had disappointed their fans in Sri Lanka and around the world. They have to win this match to avoid the clean sweep in the series of three T20 matches. This match is very important for Sri Lanka.

Sri Lanka had failed to give the best performance in each and every department of the game in both previously played matches. Especially the batting order of SL had disappointed its fans. They could manage to score just 128 runs in the first T20 match and they were poorer in the second T20 match as they could manage to score just 124 runs in 20 overs. No batter from their side could manage to put some big runs on the board. Pathum Nissanka and Gunathilaka are opening the batting inning for Sri Lanka but both batters had failed to provide a good opening start. Charith Asalanka, Kusal Mendis, B Rajapaksa, Dasun Shanaka, and W Hasaranga are leading the batting department of SL.

Asalanka was the highest run-scorer in the first match with 39 runs to his name on 33 balls with the help of two boundaries and the same huge sixes. Kusal Mendis was the other batter who put some runs on the board. C Karunaratne and Chameera failed to open the account on the scoreboard. The batting order of Sri Lanka had provided nothing to defend to the bowling department even though they were good in the previous match and gave a tough time to the batters of Australia. Maheesh Theekshana, Danushka Gunathilaka, Dushmantha Chameera, Wanindu Hasaranga, Nuwan Thushara, and Charith Asalanka are taking care of the bowling department of Sri Lanka. Wanindu Hasaranga was the most successful bowler in the previous match with four wickets to his name in four overs against 33 runs. Nuwan Thushara and Dushmantha Chameera picked one wicket each while Maheesh Theekshana, Charith Asalanka, and Danushka Gunathilaka were the bowlers who could not manage to pick any wicket.

Australia had outclassed SL in both previously played matches. The bowling department of Australia had been just outstanding so far. Glenn Maxwell, Josh Hazlewood, Jhye Richardson, Kane Richardson, Ashton Agar, and Mitchell Marsh are leading the bowling department of AUS and these all bowlers had been good on this tour of Sri Lanka now. Kane Richardson was the most successful bowler in the previous match with four wickets to his name in four overs against 33 runs. Jhye Richardson was the other bowler who destroyed the batting order of Sri Lanka. He picked three wickets in four overs while he was charged for 26 runs. Glenn Maxwell picked two wickets.

The batting department of Australia is strong and experienced and they were just superb in the first match but they faced some issues to chase a low target on the board in the previous match. They chased the target of 125 runs in 17.5 overs with just three wickets in hand. Aaron Finch, David Warner, Mitchell Marsh, Steven Smith, Glenn Maxwell, Marcus Stoinis, and Matthew Wade are the leading batters of Australia but they were not good in the previous match. Matthew Wade was the most successful batter in the previous match who remained not out after scoring 26 runs with the help of two boundaries. Aaron Finch scored 24 runs while David Warner had 21 runs to his name on just 10 balls with the help of three boundaries and one huge six.

Sri Lanka had played a total of 158 T20 matches where they won 69 while opposing teams had won 87 matches. Their two matches were ended with no result.

Australia had played 161 T20 matches so far. They had won 86 matches and had lost 72 matches. Their three matches were ended with no result.

Australia had played 24 matches against Sri Lanka where they had won 15 matches while Sri Lanka had won nine matches.

The st match of Australia vs Sri Lanka will be played at Pallekele International Cricket Stadium, Pallekele. The pitch at this stadium is good for batting but is one of the slower pitches in the Caribbean. Run-scoring is not going to be very easy and that could actually be a good thing for both teams. A total of 170 runs can be a par score

The weather forecast for Pallekele on match day is not very good. Rain is predicted for most of the day and so it looks like we are going to struggle to get a game in.

Dream11 Prediction for Sri Lanka vs Australia-Sri Lanka Tri-Series 2019-3rd T20. After checking the latest player’s availability, which players will be part of both teams, the possible tactics that the two teams might use as we had learned from the previous match of this series.

We had provided you the above-mentioned today prediction on the basis of our research, understanding, and analysis. You can consider the point we had provided you and in the end, the final decision will be yours that your have to make at your own risk.