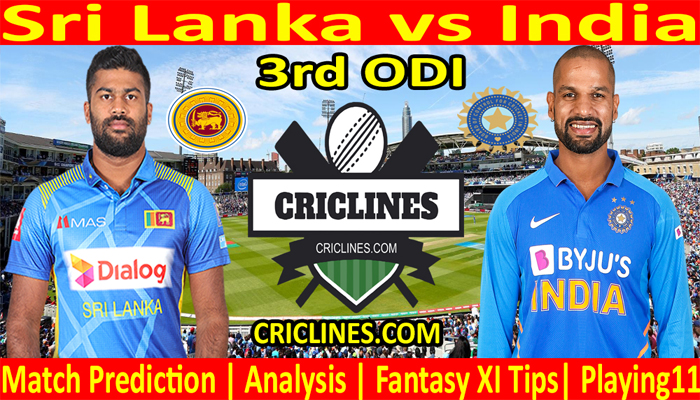 The world is ready to witness yet another big battle of ODI cricket. The 3rd ODI match of India tour of Sri Lanka, 2021 is scheduled to be held on Friday, 23rd July 2021 at R.Premadasa Stadium, Colombo. We are providing 100 safe, perfect, and accurate today match prediction for the all matches of Sri Lanka and India.

India had won the both ODI matches played so far and also the series of three matches with 2-0 and now, they have a golden chance to have a clean sweep against Sri Lanka. We saw some outstanding performance by the middle batting order of India and they won a match that they were near to lose.

Sri Lanka had totally failed to give the best performance in this home series against India and had lost the both ODI matches and also the series of ODI matches. They lost the previous match that they could have easily won. They won the toss and decided to bat first. The performance of the batting order of Sri Lanka was good. They scored a total of 275 runs in their inning of 20 overs. Charith Asalanka was the highest run-scorer from their side who scored 65 runs and smashed six boundaries during his inning.

Avishka Fernando scored 50 runs while Chamika Karunaratne remained not out after scoring 44 runs and Minod Bhanuka had 36 runs to his name. Sri Lanka lost the previous match due to the worst performance by their bowling department. They failed to defend the target of 276 runs even after pick key wickets of team India early. They leaked the target in 49.1 overs. Wanindu Hasaranga was the highest wicket-taker from their side who picked three wickets in his 10 overs bowled out against 37 runs. Kasun Rajitha, Lakshan Sandakan, and the skipper, Dasun Shanaka picked one wicket each.

India had been outstanding in this tour of Sri Lanka even their key players were not available for this tour. We can say that India’s B team had destroyed the Lankan batting and bowling in this series. They had won the series and now have a golden chance to have a whitewash against Sri Lanka. The performance of the bowling department of India was not impressive in the previous match. They leaked 275 runs in their inning of 50 overs. Yuzvendra Chahal was the most successful bowler from their side who picked three wickets in his 10 overs bowled out against 50 runs.

Bhuvneshwar Kumar also picked three wickets in his 10 overs bowled out while he was charged for 54 runs. Deepak Chahar picked two wickets. The top batting order of team India failed to give their best performance and they lost their key three wickets on the total of 63 runs. Deepak Chahar was the most successful and highest run-scorer from their side who remained not out after scoring 69 runs. Suryakumar Yadav scored 53 runs while Krunal Pandya could manage to score 35 runs.

Sri Lanka had played a total of 865 ODI matches so far. They won 392 matches while other teams won 430 matches. 38 matches of Sri Lanka were ended with no result and five matches were tied.

India had played 995 ODI matches right now with 518 wins to their name while they had lost 427 matches. Their 41 matches were ended with no result and nine matches were tied.

Sri Lanka had played 161 ODI matches against India where they won 56 matches while India had won 93 matches. 11 matches between these two teams were ended with no results and just one match was tied.

The 3rd ODI match between Sri Lanka and India is going to be played at the R.Premadasa Stadium, Colombo. The pitch at this stadium is excellent for batting. The boundaries at this venue are short and will bring the spinners into play. The pitch will continue to be good for batting throughout the match. A total of 280 can be difficult for batting second to chase.

The weather forecast in Colombo on match day is not very good. There are some chances of rain but and that is possible that we may have an interrupted match.

Shikhar Dhawan is in good form and he had been successful on the pitches of Sri Lanka. Hardik Pandya is a hard-hitter who can be dangerous for the bowling unit of Sri Lanka. Isuru Udana and Dasun Shanaka are key players to watch from the Lankan side.

Who Will Win Sri Lanka vs India 3rd ODI

Who Will Win Sri Lanka vs India 3rd ODI Toss-IND

Who Will Win Sri Lanka vs India 3rd ODI Match-IND

Dream11 Prediction for Sri Lanka vs India. After checking the latest player’s availability, the Dream 11 Team for this match of Sri Lanka and India is mentioned under.