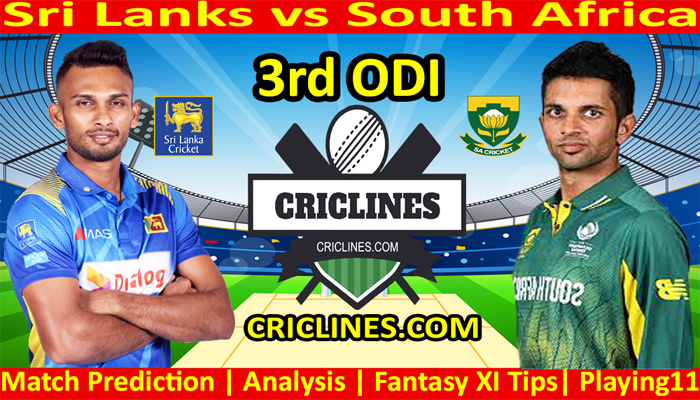 This ODI series of three matches between Sri Lanka and South Africa is now leveled with 1-1 and this match will decide the series winner. This series is very important for both teams to get some points for World Cup Super League.

Sri Lanka won the first ODI match with a margin of 14 runs but they were unlucky in the second match which was decided through the DLS method. They lost the toss and were asked to field first. The performance of their bowling unit was not impressive as they leaked plenty of runs. They were charged for 283 runs in their inning of 50 overs. Dushmantha Chameera and Chamika Karunaratne picked two wickets each while W Hasaranga and Dhananjaya de Silva were the bowlers who picked one wicket each.

The batting order of Sri Lanka also failed to give the best performance in the second ODI match. They failed to chase the target and were all-out on a total of just 197 runs in 36.4 overs. Charith Asalanka was the highest run-scorer from their side who scored 77 runs at the strike rate of 111 with the help of five boundaries and three sixes. Chamika Karunaratne scored 36 runs while the skipper, Dasun Shanaka could manage to score 30 runs.

South Africa had a strong comeback in the second ODI match after losing the first match. They won the second ODI match with a handsome margin of 67 runs through the DLS method. The batting order of South Africa had an outstanding performance and put a total of 283 runs in their inning of 47 overs. Janneman Malan was the most successful and highest run-scorer from their side who scored a century. He scored a total of 121 runs with the help of nine boundaries and one huge six. R Hendricks scored 51 runs while Heinrich Klaasen had 43 runs to his name.

Like the batting, the bowling department of South Africa also had an outstanding performance in the previous match. They defended the target of 284 runs and leaked 197 runs. They send all teams of Sri Lanka back to the pavilion in 36.4 overs. Tabraiz Shamsi almost destroyed the batting order of Sri Lanka. He picked five wickets in his 7.4 overs bowled out while he was charged for 49 runs. Kagiso Rabada picked two wickets while Wiaan Mulder, George Linde, and the skipper, Keshav Maharaj picked one wicket each in the previous match.

Sri Lanka had played a total of 868 ODI matches where they won 394 while opposing teams had won 431 matches. Their five matches were tied and 38 matches were ended with no result.

South Africa had played 633 ODI matches so far. They had won 388 matches and had lost 220 matches. Their 19 matches were ended with no result and 6 matches were tied.

South Africa had played 79 ODI matches against Sri Lanka where they won 45 matches while Sri Lanka had won 32 matches. Their one match was tied and one match was ended with no result.

The 5th match of Sri Lanka vs South Africa will be played at R.Premadasa Stadium, Colombo. The pitch at this stadium is good for batting but is one of the slower pitches in the Caribbean. Run-scoring is not going to be very easy and that could actually be a good thing for both teams. A total of 270 runs can be a par score

Dream11 Prediction for Sri Lanka vs South Africa-Sri Lanka Tri-Series 2019-3rd ODI. After checking the latest player’s availability, which players will be part of both teams, he possible tactics that the two teams might use as we had learned from previously played matches to make the best possible Dream11 team.