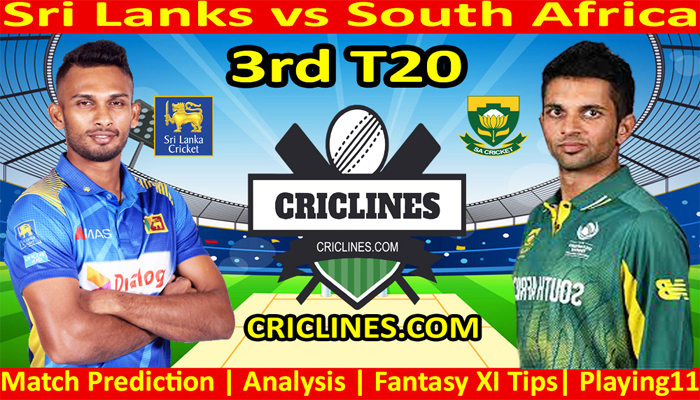 South Africa had won the both T20 matches played and also the series of three matches with 2-0. Now they have a golden chance to whitewash Sri Lanka in this series. Sri Lanka had totally failed to give the best performance in this home series and they have to win this match otherwise, we know the result.

The batting order of Sri Lanka almost collapsed in the 2nd T20 where they won the toss and decided to bat first. They were all-out on the total of just 103 runs in 18.1 overs. Kusal Perera was the highest run-scorer from their side who scored 30 runs on 25 deliveries with the help of two boundaries and one huge six. B Rajapaksa scored 20 runs while Asalanka could manage to score 14 runs.

Like the batting, the bowling department of Sri Lanka also failed to perform well in the previous match. They failed to defend a low target on the board and leaked the target of 104 runs in just 14.1 overs. Wanindu Hasaranga was the only bowler from their side who picked a wicket in his four overs bowled out against just 22 runs. Dushmantha Chameera, Dhananjaya de Silva, Mahesh Theekshana, Praveen Jayawickrama, and the skipper, Dasun Shanaka were the bowlers who failed to pick any wicket.

South Africa had won this series of three T20 matches. The performance of their bowling unit was just outstanding. They send the all team of Sri Lanka back to the pavilion on a total of just 103 runs in 18.1 overs. Tabraiz Shamsi was the most successful bowler from their side who picked three wickets in his four overs bowled out against just 20 runs. Markram also picked three wickets while he was charged for 21 runs in his four overs bowled out.

Bjorn Fortuin was the other bowler from the side of South Africa who performed well in the previous match. He picked two wickets while Nortje and Maharaj picked one wicket each. The batting order of South Africa also performed well in the previous match. They chased the target of 103 runs in 14.1 overs. Quinton de Kock was the most successful and highest run-scorer from their side who remained not out after scoring 58 runs. He faced 48 deliveries and smashed seven boundaries during his inning.

Sri Lanka had played a total of 139 T20 matches where they won 63 while opposing teams had won 74 matches. Their 2 matches were ended with no result.

South Africa had played 141 T20 matches so far. They had won 81 matches and had lost 59 matches. Their 1 match was ended with no result.

South Africa had played 15 T20 matches against Sri Lanka where they won 10 matches while Sri Lanka had won 5 matches.

The 5th match of the Sri Lanka series will be played at R.Premadasa Stadium, Colombo. The pitch at this stadium is good for batting but is one of the slower pitches in the Caribbean. Run-scoring is not going to be very easy and that could actually be a good thing for both teams. A total of 270 runs can be a par score

Dream11 Prediction for Sri Lanka vs South Africa-Sri Lanka Tri-Series 2019-3rd T20. After checking the latest player’s availability, which players will be part of both teams, he possible tactics that the two teams might use as we had learned from previous matches to make the best possible Dream11 team.