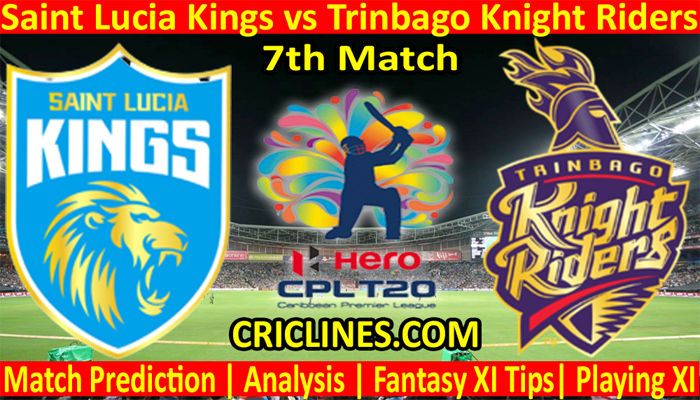 The cricket fans are ready to witness yet another big battle of the Caribbean Premier League T20. The 7th Match match of CPL T20 2021 is scheduled to play between Saint Lucia Kings and Trinbago Knight Riders on Sunday, 29th August 2021 at Warner Park, Basseterre, St Kitts. We are posting safe, accurate, and secure today match predictions for all matches of CPL free.

Saint Lucia Kings had faced a heavy defeat against Jamaica Tallawahs by the margin of 120 runs and now they need to have a look at their bowling department once again. They leaked 255 runs in the previous match which was their worst performing in the history of CPL. Wahab Riaz leaked 61 runs in three overs bowled out and remained wicket-less. We think that he will get a chance to play this match but he will be under huge pressure. Keemo Paul, Obed McCoy, Usman Qadir, and Kesrick Williams leaked plenty of runs.

The batting order of Saint Lucia Kings also failed to give the best performance and scored 135 runs. They were all-out in 17.3 overs while chasing a big total of 256 runs on the board. Rakheem Cornwall had a good start but failed to continue scoring the runs. The big names of Saint Lucia Kings like Andre Fletcher, Faf du Plessis, and Roston Chase failed to put some runs on the board. Tim David was the highest run-scorer from their side who scored 56 runs on 28 deliveries with the help of eight boundaries and three sixes.

Trinbago Knight Riders had played two matches with one win and the other lost. They are coming to this match on the back of a massive win over Barbados Royals in their most recent match by the margin of six wickets. They lost the toss and were put into the field first. The bowling unit of TKR had an outstanding performance and leaked 122 runs in their 20 overs inning. Isuru Udana was the highest wicket-taker with five wickets to his name. Rampaul picked two wickets while Akeal Hosein and Sunil Narine picked one wicket each.

The top batting order of Trinbago Knight Riders had failed to put some big runs on the board in both previously played matches. Many of us were expecting that Evin Lewis will score runs but he failed. He can score some runs in this match. The skipper, Kieron Pollard played a key role in the previous win for his team. He scored 58 runs on 30 deliveries with the help of three boundaries and five huge sixes. He also remained not out till the chase of the target. Denesh Ramdin scored 29 runs while Tim Seifert scored 15 runs.

Trinbago Knight Riders are full of experienced and young players of the t20 format and have the players like Chris Gayle. The batting order of this team is also strong and some well-known hitters of the t20 format are part of the squad of this team, so the winning chances of today’s match for Trinbago Knight Riders have been increased. The equation of who will win today’s cricket match prediction and who will win the cricket match today is mentioned as under.

The 7th Match match of the Caribbean Premier League is going to be played at Warner Park, Basseterre, St Kitts. We had observed in the previous matches played here that the pitch here at this venue is good for batting. The track is slower than the others we have seen and helps the spinners quite a bit. We are hoping that the surface is bound to get slower and be a bit more difficult for batting in this match. A score of 185 is going to be tough to chase.

Dream11 fantasy team lineup prediction for Saint Lucia Kings vs Trinbago Knight Riders 7th Match match CPL 2021. After checking the latest player’s availability, which players will be part of both teams, he possible tactics that the two teams might use as we had learned from previous seasons of Caribbean Premier League to make the best possible Dream11 team.