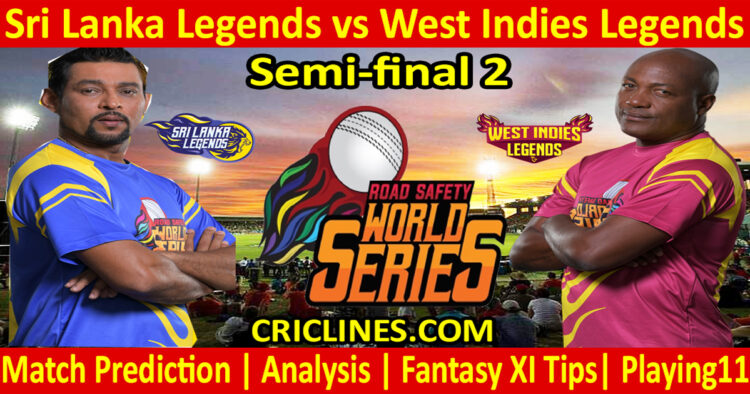 The cricket fans are ready to witness yet another big battle of T20 cricket. The Semi-final 2 match of Legends League Cricket T20 2022 is scheduled to be held on Friday, 30th September 2022 between Sri Lanka Legends and West Indies Legends at Shaheed Veer Narayan Singh International Stadium, Raipur. We are posting a safe, secure, and accurate today match prediction of Road Safety World Series T20 2022.

The performance of West Indies Legends also had been good in this tournament. They also played five matches and won two matches. They had lost one match while their two matches ended with no result. They are holding the fourth position on the points table.

Sri Lanka Legends won their most recent match against Bangladesh Legends with a handsome margin of 70 runs. They lost the toss and were asked to bat first. The way how their batting order performed in that match was just outstanding. They scored 213 runs in their 20 overs. Almost all batters from their side put some runs on the board. The skipper, Tillakaratne Dilshan was the most successful and highest run-scorer from their side who scored 51 runs on 30 balls with the help of five boundaries and one huge six.

Mahela Udawatte scored 48 runs while S Jayasuriya scored 37 runs and Chamara Silva remained not out after scoring 34 runs. The bowling unit of Sri Lanka Legends also performed well and leaked 143 runs while defending the target of 214 runs. They used eight bowlers in that match and Tillakaratne Dilshan was the most successful and highest wicket-taker from their side who picked three wickets in three overs against 23 runs. Asela Gunaratne picked two wickets while Sanath Jayasuriya and Dhammika Prasad had one wicket each to their names.

West Indies Legends were beaten by Australia Legends in their most recent match by the margin of eight wickets. They won the toss and decided to bat first. The performance of their batting order was just outstanding. They scored a total of 178 runs in 20 overs. Dwayne Smith was the most successful batter from their side with 65 runs to his name on 33 balls with the help of six boundaries and four huge sixes. The skipper, K Edwards also performed well and scored 46 runs. He faced 33 balls and smashed three boundaries and two huge sixes.

The bowling department of West Indies Legends totally failed to give the best performance in the previous match. They failed to defend the target of 179 runs and leaked this target in just 15.1 overs. Dwayne Smith was the only successful bowler from their side with one wicket to his name in two overs against 21 runs. Dave Mohammed also picked one wicket but he leaked a lot of runs. He was charged for 51 runs in just 3.1 overs bowled out. Devendra Bishoo, Jerome Taylor, Sulieman Benn, Krishmar Santokie, and Daren Powell were the bowlers who failed to pick any wicket.

The Semi-final 2 match of Legends League Cricket 2022 is scheduled to be held at Shaheed Veer Narayan Singh International Stadium, Raipur. Pitch here in this stadium is a batting favored and with a little bit of bounce that may help the seamers. Spinners can play a key role on this pitch. A score of near about 290 runs should be a par.