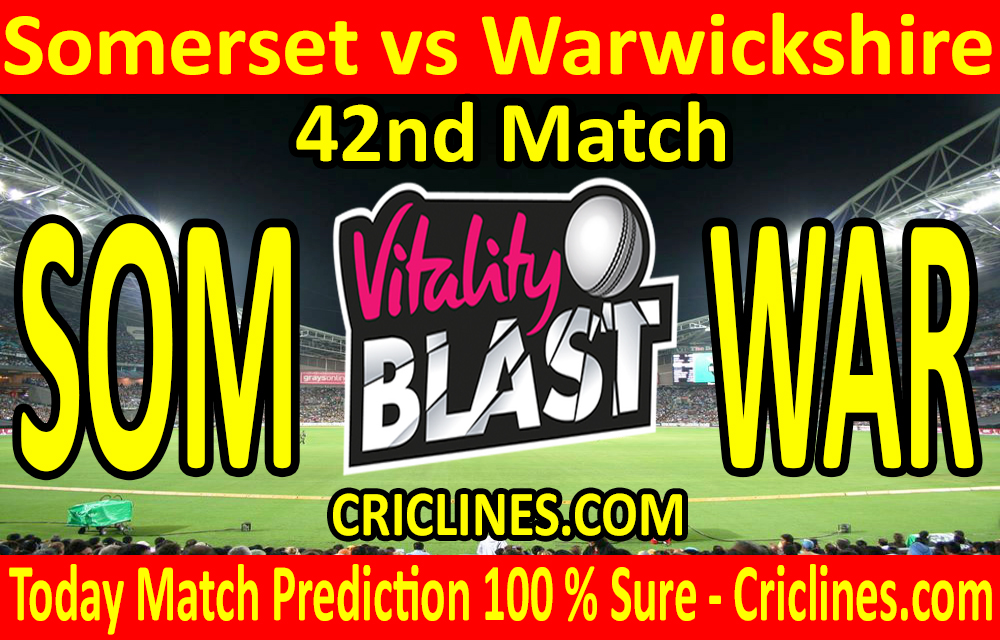 The world is ready to witness yet another big battle of Vitality T20 Blast. The 42nd Match of Vitality T20 Blast 2020 is scheduled to play between Somerset and Warwickshire on Friday, 4th September 2020 at The Cooper Associates County Ground, Taunton. We are posting safe, accurate, and secure today match prediction for all matches of T20 Blast free.

The performance of Somerset had been good in this edition of T20 Blast. They had played a total of four matches with two wins to their name. They had lost one match while their one match was ended with no result. They are holding the 3rd position on the points table of the Central Group. They are coming to this match on the back of a massive win over Glamorgan in their previous match with a handsome margin of eight wickets. They won the toss and decided to field first. The performance of their bowling unit was good. They leaked 133 runs in their inning of 20 overs. Ben Green was the most successful and highest wicket-taker from their side who picked four wickets. The batting order of this team also had a good performance. They chased the target of 134 runs in just 16.1 overs. The skipper, Tom Abell was the highest run-scorer from their side who remained not out after scoring 74 runs. James Hildreth scored 34 runs and remained not out till the chase of the target.

Warwickshire is the team that had failed to give their best performance in this tournament. They had played a total of four matches with just one match to their name. They had lost two matches while their one match was ended with no result. They are laying at the second position from the bottom of the points table of the Central Group. They faced a heavy defeat against Gloucestershire in their most recent match by a handsome margin of 57 runs. That was a rain-affected match that was reduced to 12 overs per side. They won the toss and decided to field first. Their bowling unit almost failed to give their best performance in that match. They leaked 157 runs in their inning of 12 overs. Jeetan Patel, Mousley, and Brookes picked one wicket each while Olly Stone, Bresnan, Jacob Lintott, and the skipper, W Rhodes failed to pick any wicket in the previous match.

The batting order of Warwickshire failed to chase the target of 158 runs and scored 100 runs in their inning of 12 overs. Ed Pollock was the highest run-scorer from their side who scored 21 runs on 13 deliveries with the help of three sixes. Adam Hose smashed the inning of 18 runs on just seven balls. He smashed one boundary and two huge sixes during his inning. Henry Brookes scored 16 runs while Sam Hain had 11 runs to his name. Almost seven bowlers from their side failed to even enter into double-figure.

The 42nd Match of Vitality T20 Blast is going to be played at The Cooper Associates County Ground, Taunton. The pitch here at this stadium is expected to be flat and much favored for batting. It has a decent amount of pace and bounces in it. We may have some high scoring matches here. The pitch may also have some help in it for the seamers.

Check out the Dream11 fantasy prediction for the 42nd Match of the finals day in Vitality T20 Blast, between Somerset and Warwickshire.