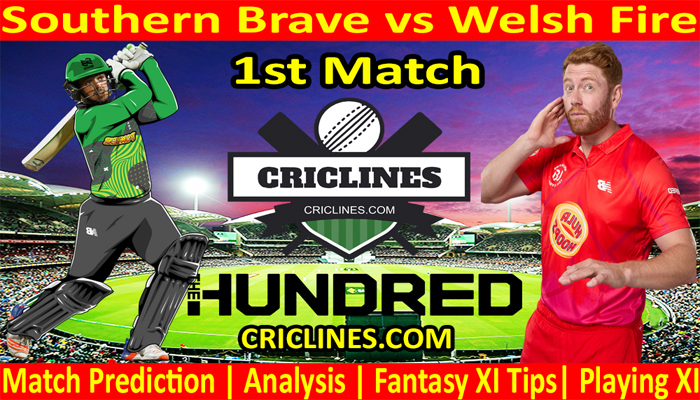 The cricket fans are ready to witness yet another big battle of The 100 League. The 1st match of The Hundred League 2022 is scheduled to play between Southern Brave and Welsh Fire on Wednesday, 3rd August 2022 at The Rose Bowl, Southampton. We are posting a safe, accurate, and secure today match prediction of The Hundred League Prediction.

The Hundred is the newest format of cricket which was introduced in the previous year and the second edition of this tournament is going to be held. This format is played in men’s and women’s cricket. This tournament is counted in balls rather than in overs. Each inning contains a hundred balls to bat and bowl.

Southern Brave are the defending champions of The Hundred League 2022. They are the champions of The Hundred League 2021 and will be defending their title. They were the second-best performing team after the completion of the league matches. They won five out of eight league matches. They lost two matches while their one match ended with no result. They beat Trent Rockets in the eliminator match and made their way to the final where they beat Birmingham Phoenix. The management of this team had retained most players who were part of the team in the previous edition of The Hundred League.

Some of the best players in the shorter format of cricket like James Vince, Marcus Stoinis, Tim David, and Quinton de Kock are part of the squad of Southern Brave. James Vince, Marcus Stoinis, and Tim David are known for being hard-hitting and we think that run-scoring will not be difficult for this team. Quinton de Kock is the other batter who is in good form these days and he will open the batting inning for Southern Brave. We think that the bowling department of Southern Brave is not much stronger than their bowling department is. Tymal Mills and George Garton are two major bowlers of this team. Chris Jordan is also part of the squad of this team. Rehan Ahmed and Jake Lintott are also the squads of this team.

Welsh Fire was the second worst performing team of the previous edition of The Hundred League. Like all other teams, they also played eight league matches with just three wins to their name. They lost five matches and were laying at the second position from the bottom of the points table. They had made some smart changes in their squad for this edition of The Hundred League and had added some extra power in batting. Tom Banton, Ben Duckett, David Miller, Jonny Bairstow, and Joe Clarke had been picked by this team to handle the batting order.

David Miller and Jonny Bairstow are two dangerous batters of the shorter format of cricket. Tom Banton and Ben Duckett are two other batters who can put any strong bowling department under pressure. The above-mentioned bowlers are skilled to play against spin bowlers and can help against the bowling department of Southern Brave. The bowling department of Welsh Fire was very weak in the previous edition and things are not different in this season too. Adam Zampa is the only specialist short format cricket bowler in the squad of this team. Other bowlers of this team are inexperienced and this can be a dangerous point.

Southern Brave is full of experienced and young players of the t20 format. The batting order of this team is also strong and some well-known hitters of the t20 format are part of the squad of this team, so the winning chances of today match for Southern Brave have been increased. The equation of who will win today’s cricket match prediction and who will win the cricket match today is mentioned as under.

The 1st Match match of The Hundred League 2022 is going to be held at The Rose Bowl, Southampton. We had observed in the previous matches played here that the pitch here at this venue is good for batting. The track is slower than the others we have seen and helps the spinners quite a bit. We are hoping that the surface is bound to get slower and be a bit more difficult for batting in this match. A score of 185 is going to be tough to chase.

Who Will Win Southern Brave vs Welsh Fire, 1st Match The Hundred League-2022

We had provided you with the above-mentioned today prediction on the basis of our research, understanding, and analysis. You can consider the point we had provided you and in the end, the final decision will be yours that you to make.