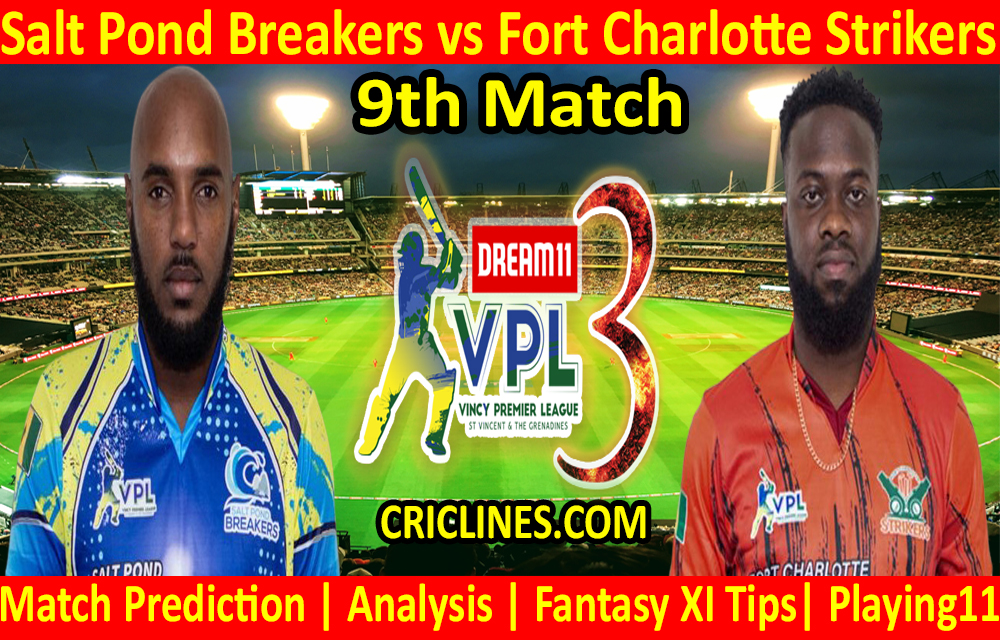 The cricket fans are ready to witness yet another big battle of T10 cricket. The 9th Match of Vincy T10 Premier League 2021 is scheduled to play between Fort Charlotte Strikers and Salt Pond Breakers on Wednesday, 19th May 2021 at Arnos Vale Ground, Kingstown, St Vincent. We are posting safe, accurate, and secure today match prediction for all matches of VPL T10 League free.

Salt Pond Breakers is the un-beaten team of this tournament right now as they had won both played matches so far and are holding the 2nd position on the points table. They are coming to this match on the back of a massive win over Dark View Explorers with a handsome margin of 43 runs. The way how the batting order of this team performed in the previous match was just outstanding. They scored a total of 138 runs in their inning of 10 overs. Sunil Ambris was the most successful and highest run-scorer from their side who smashed the inning of 53 runs on just 19 deliveries with the help of five boundaries and four huge sixes. Seon Sween also had an outstanding performance with the bat. He scored 42 runs while he faced 24 balls and smashed two boundaries and four sixes.

Andrew Thomas was the other batsman from Salt Pond Breakers who put some runs on the board. He scored 29 runs on just 12 balls with the help of four sixes. The bowling department of Salt Pond Breakers also performed well in the most recent match. They defended the target of 139 runs and leaked 95 runs in their inning of 10 overs. Jevon Samuel was the most successful bowler from their side who picked two wickets in his one over bowled out against just two runs. Denson Hoyte also had an outstanding performance with the ball. He also picked two wickets in his one-over bowled out while he leaked just four runs. Delorn Johnson also picked two wickets but he leaked plenty of runs. He was charged for 26 runs in his two overs bowled out. Sunil Ambris, Jeremy Haywood, and Jeremy Layne picked one wicket in the previous match.

Fort Charlotte Strikers had failed to give the best performance in this season of the VPL T10 League. They had won just one out of three matches played so far. They had lost two matches and are holding the fourth position on the points table. They were beaten by Dark View Explorers in their most recent match by the margin of 19 runs. The performance of their bowling unit was not good in that match. They leaked 95 runs in their inning of 10 overs. Rasheed Frederick was the most successful bowler from their side who picked one wicket in his two overs bowled out against 16 runs. Ray Jordan, Geron Wyllie, and Kirton Lavia picked one wicket each.

Sealroy Williams and Shaquille Browne were the bowlers who failed to pick any wicket in the previous match. The batting order of Fort Charlotte Strikers also failed to give the best performance in the previous match. They failed to chase the target of 96 runs and scored 76 runs in their 10 overs inning. Miles Bascombe was the highest run-scorer from their side who scored 30 runs. He faced 24 deliveries and smashed one boundary and three sixes. Gidron Pope scored 12 runs while Leshawn Lewis could manage to score eight runs.

The 9th Match of Vincy Premier League season 2021 is scheduled to be held at Arnos Vale Ground, Kingstown, St Vincent. Fewer matches had been played here. A score near about 110 can be difficult for the chasing team.