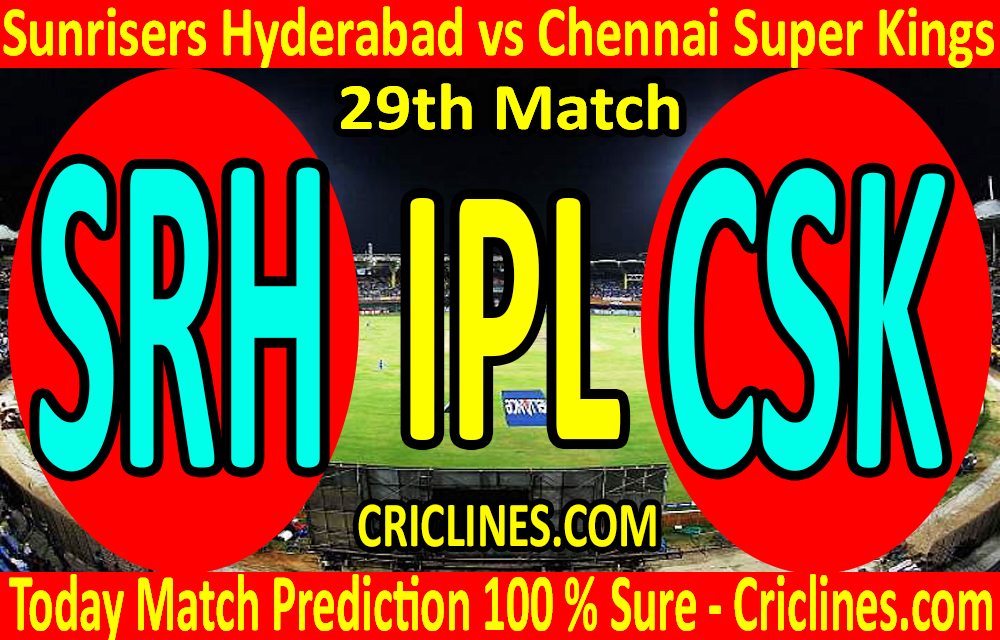 The cricket fans are ready to witness yet another big battle of the Indian Premier League. The 29th Match of Dream11 IPL T20 2020 is scheduled to play between Sunrisers Hyderabad and Chennai Super Kings on Tuesday, 13th October 2020 at Dubai International Cricket Stadium, Dubai. We are posting safe, accurate, and secure today match prediction for all matches of IPL T20 free.

The performance of Sunrisers Hyderabad had been average in this tournament of the IPL T20. They had played a total of seven matches with three wins to their name. They had lost four matches and are holding the 5th position on the points table of Dream 11 IPL 2020. They faced a defeat against Rajasthan Royals in their most recent match that they could easily win. There were rumors that the matches of IPL are decided earlier and we had also observed this in some recent matches. A team that was in a strong winning position, suddenly it losses that match. The recent match of Rajasthan Royals and SRH is an example of that. SRH was in a winning position and suddenly, the RR came to winning position and the game changed totally in the last four overs. Sunrisers Hyderabad won the toss and decided to bat first in the most recent match against RR. The performance of the batting order of Sunrisers Hyderabad was average in the previous match. They scored 158/4 runs in their inning of 20 overs. Almost all batsmen from their side put some runs on the board. Manish Pandey was the highest run-scorer from their side who scored 54(44) with the help of two boundaries and three sixes.

The skipper, David Warner also had an outstanding performance with the bat in the previous match. He scored 48(38) and smashed three boundaries and two sixes. Kane Williamson remained not out after scoring 22 runs while Jonny Bairstow scored 16 runs. The performance of the bowling unit of SRH was outstanding till the 16th over of their bowling inning but after that, they lost the momentum and leaked 64 runs in the last four overs. They leaked the target of 159 runs in 19.5 overs. Rashid Khan, once again was the most successful bowler from the SRH side who picked two wickets in his four overs bowled out against 25 runs. Khaleel Ahmed was the other bowler from their side who picked two wickets in his 3.5 overs bowled out while he was charged for 37 runs. No other bowler from their side could pick any wicket. Sandeep Sharma, T Natarajan, Abhishek Sharma, and Vijay Shankar were the bowlers who failed to pick any wicket in the previous match.

There is no doubt that Chennai Super Kings is a strong and experienced team of the Indian Premier League but they had failed to prove this till now. They had played seven matches so far with just two wins to their name. They had lost five matches and are laying at the second position from the bottom of the points table. They were beaten by Royal Challengers Bangalore in their previous match by a handsome margin of 37 runs. They lost the toss and were put into the field first. The performance of their bowling unit was average in the previous match. They leaked 169 runs in their inning of 20 overs. Shardul Thakur was the highest wicket-taker from their side who picked two wickets but he leaked plenty of runs. He was charged for 40 runs in his four overs bowled out. Sam Curran and Deepak Chahar picked one wicket each. Sam Curran leaked 48 runs in his four overs bowled out. DJ Bravo, Karn Sharma, and Ravindra Jadeja failed to pick any wicket.

The batting order of Chennai Super Kings almost collapsed in the previous match. They could manage to score 132 runs while chasing the target of 170 runs on the board. Ambati Rayudu was the highest run-scorer from their side who scored 42(40) runs with the help of three boundaries. N Jagadeesan had 33(28) runs to his name while Shane Watson, who was in good form could manage to score 14 runs. The skipper, MS Dhoni could manage to score just 10 runs. No other batsmen from the CSK side could even enter into double-figure. Sam Curran was bowled out on a golden duck while Ravindra Jadeja and Dwayne Bravo scored 7 runs each. Faf du Plessis had just eight runs to his name. Chennai Super Kings are still a strong team on papers and have the ability to win against any team in this tournament. Shane Watson, Faf du Plessis, and Ambati Rayudu had to play a major role in up-coming important matches for CSK.

The 29th Match match of the Indian Premier League is going to be held at the Dubai International Cricket Stadium, Dubai. We had observed in the previous matches played here that the pitch here at this venue is good for batting. The track is slower than the others we have seen and helps the spinners quite a bit. We are hoping that the surface is bound to get slower and be a bit more difficult for batting in this match. A score of 195 is going to be tough to chase.

Dream11 fantasy team lineup prediction for Sunrisers Hyderabad vs Chennai Super Kings 29th Matches IPL 2020. After checking the latest players’ availability, which players will be part of both teams, he possible tactics that the two teams might use as we had leaned from previous seasons of Indian Premier League to make the best possible Dream11 team.