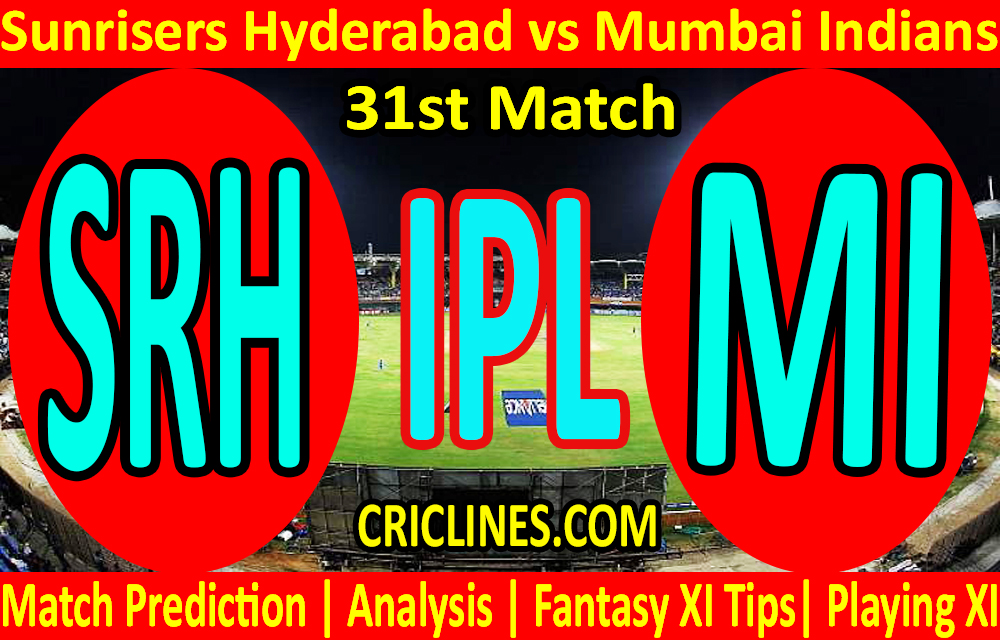 The cricket fans are ready to witness yet another big battle of the IPL T20. The 31st Match of the Indian Premier League is scheduled to play between Sunrisers Hyderabad and Mumbai Indians on Tuesday, 4th May 2021 at Arun Jaitley Stadium, Delhi. We are posting safe, accurate, and 100% secure today match prediction for all matches of IPL T20 free.

Sunrisers Hyderabad had taken a bold step in the middle of this tournament. They had removed David Warner from not only captaincy but also from the playing eleven. This is true that David Warner had failed to lead Sunrisers Hyderabad and under his captaincy, this team had won just one out of seven matches but this step can be dangerous. They replaced three players in the final playing eleven in the previous match and gave a chance to Mohammad Nabi but he also failed to deliver. He bowled out just one over which went for 21 runs and he scored just 17 runs. We have no doubt that Mohammad Nabi is a hard hitter of cricket ball but including him in the playing eleven is a dangerous decision. We think that Jason Holder will replace Mohammad Nabi once again in this match. The batting order of Sunrisers Hyderabad is not much stronger and we think that they are going to struggler in upcoming matches. Jonny Bairstow, Kane Williamson, and Manish Pandey are covering the top three batting positions.

Vijay Shankar, Kedar Jadhav, and Mohammad Nabi or Jason Holder are the middle order batsmen and we don’t think so that this is a strong batting order. We had mentioned in the previous predictions that Rashid Khan is the only bowler who is leading the bowling department of Sunrisers Hyderabad. Bhuvaneshwar Kumar had almost failed to give the best performance through this tournament. He had not picked a single wicket in the most recent match against and also proved an expensive bowler. Sandeep Sharma also leaked plenty of runs in the previous match. He was charged for 50 runs in his four overs bowled out and he picked one wicket. Khaleel Ahmed is another bowler who had failed to deliver. He leaked 41 runs in four overs and failed to pick any wicket. Vijay Shankar also leaked plenty of runs. Half of the tournament had been pass and we don’t think that even some key changes will work for Sunrisers Hyderabad.

Mumbai Indians struggled in a couple of early matches but they are back to the form. They had won four out of seven matches played so far and are holding the 4th position on the points table. They chased a total of 219 runs in the previous match against Chennai Super Kings. This was the first time that Mumbai Indians chased any target of 200 plus but it was their second-highest total in their history of IPL. Kieron Pollard got some time to adjust on the wicket and what happened after this, we all know it. Ishan Kishan was once again missing for that match which was surprising for us. Mumbai Indians is playing with just three regular batsmen and are depending on the all-rounders. Hardik Pandya, Kieron Pollard, Jimmy Neesham, and Krunal Pandya can bat well but they can’t fill the place of a genuine batsman. The current playing eleven squads of Mumbai Indians is full of a lot of bowling choices and a lot of six-hitting power.

It can be dangerous to play with just three regular batsmen and if Mumbai Indians lose two wickets early, it will also expose the middle order with the new ball. The bowling unit of Mumbai Indians is strong and experienced but it was charged for plenty of runs even Trent Boult, Jasprit Bumrah, and Rahul Chahar leaked plenty of runs. But we can’t say that the bowling unit of this team is weak. These are the bowlers who can destroy the strong batting order of any team in this tournament. Dhawal Kulkarni was tested in the previous match but he proved expensive. He leaked 48 runs in his four overs bowled out and also failed to pick any wicket. Like batting, Kieron Pollard also had proved good in the bowling even he had not given many overs to bowl. He was the highest wicket-taker in the previous match who picked two wickets in his two overs bowled out against just 12 runs.

Sunrisers Hyderabad had won just one out of five most recent matches played while Mumbai Indians had won four out of five recently played matches.

Mumbai Indians is overall a strong team than Sunrisers Hyderabad. They have the best players in the t20 format. The batting order of this team is also strong and some well-known hitter of t20 format is the part of the squad of this team, so the winning chances of today match for Mumbai Indians have been increased. The equation of who will win today cricket match prediction and who will win the cricket match today is mentioned as under.

The 31st Match of IPL T20, 2021 is going to be held at the Arun Jaitley Stadium, Delhi. We had observed in the previous matches played here that the pitch here at this venue is good for batting in early overs. The track has a good amount of pace and bounce which allows the batsmen for the good cricketing shorts but this ground also has big boundaries which can be a plus point for the bowlers. A score of 190 plus seems to be a par score.

Dream11 fantasy team lineup prediction for Sunrisers Hyderabad vs Mumbai Indians 31st Match IPL 2021. After checking the latest players’ availability, which players will be part of both teams, the possible tactics that the two teams might use as we had learned from previous seasons of the Indian Premier League to make the best possible Dream11 team.