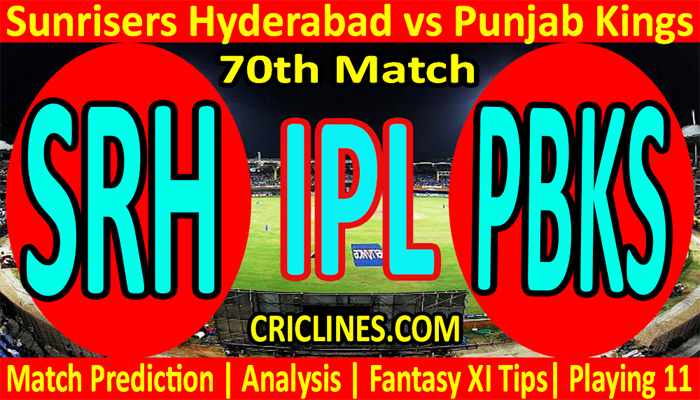 The cricket fans are ready to witness yet another big battle of the IPL 2022. The 70th match of the Indian Premier League 2022 is scheduled to play between Sunrisers Hyderabad and Punjab Kings on Sunday, 22nd May 2022 at Wankhede Stadium, Mumbai. We are posting safe, accurate, and 100% secure today match prediction of IPL T20 2022 with live IPL score and ball by ball updates with prediction.

Both teams, SRH and Punjab are out of the race for a playoff and this match is just a formality. IPL 2022 had not been impressive for Hyderabad and PBKS. SRH had played thirteen matches with just six wins to their name. They had lost seven matches and are holding the eighth position on the points table. On the other side, PBKS is the other team that had also played thirteen matches in IPL 2022. They had also won six and lost seven matches. They are situated at the seventh spot on the table. They are tied in the points with Kolkata and SRH but are good in net run rate than Punjab. This match is going to be very interesting as both teams had performed equally in IPL 2022 and also have equal strength. Some IPL prediction providers are going with SRH but we think that PBKS is going to win this match.

SRH is a strong batting team but unfortunately, they had not been impressive in IPL 2022. The key reason why they had lost so many matches in the failure of the batting department of Hyderabad. They made some key changes in the batting order and also give a chance to some new players from the bench strength in the most recent match against Mumbai. That match was very interesting which they won by the margin of just three runs. Abhishek Sharma and Priyam Garg opened the batting inning for SRH. Rahul Tripathi, Nicholas Pooran, Markram, Kane Williamson, and Washington Sundar are handling the middle batting order of SRH. They scored 193 runs in 20 overs. Rahul Tripathi was the most successful batter in the previous match with 76 runs to his name on 44 balls with the help of nine boundaries and three huge sixes. Priyam Garg also performed well with the bat and scored 42 runs on just 26 balls and smashed four boundaries and two huge sixes during his inning. Nicholas Pooran was the other batter who was good with the bat.

Pooran scored 38 runs with a strike rate of 172. The bowling department of SRH is also strong and experienced as they got the services of the best players in IPL 2022 auctions. Umran Malik had been the star bowler of Hyderabad. He has good line and length and also good speed. He had been the highest wicket-taker in IPL 2022 from the side of SRH. Fazalhaq Farooqi, Bhuvneshwar Kumar, Washington Sundar, T Natarajan, and Abhishek Sharma are the other bowlers who are presenting Hyderabad. Umran Malik was the best bowler in the previous match with three wickets to his name in four overs against just 23 runs. Bhuvneshwar Kumar was also good in the previous match with one wicket to his name in four overs while he was charged for 26 runs. Washington Sundar was the other bowler who picked one wicket in four overs but he leaked a lot of runs. He was charged for 36 runs in four overs. Abhishek Sharma, T Natarajan, and Fazalhaq Farooqi were the bowlers who could not pick any wicket. T Natarajan was the most expensive bowler who leaked 60 runs in four overs.

PBKS is the other team that has the services of the best batters as they picked the most experienced batters of the T20 format of the cricket in IPL 2022 auctions. They have the batters like Jonny Bairstow, Shikhar Dhawan, Bhanuka Rajapaksa, Liam Livingstone, Mayank Agarwal, Jitesh Sharma, Harpreet Brar, and Rishi Dhawan. These all batters had disappointed their fans. They could manage to score just 142 runs while chasing the target of 160 runs. Jitesh Sharma was the highest run-scorer in the previous match with 44 runs to his name on 34 balls with the help of three boundaries and two huge sixes. Jonny Bairstow also performed well with the bat and scored 28 runs on just 15 balls. He smashed four boundaries and one huge six during his inning. Rahul Chahar was the other batter who performed well with the bat and scored 25 runs while Shikhar Dhawan has 19 runs to his name. We think that the management of PBKS will test some new batters from the bench strength in this match as they have nothing to lose.

The bowling department of PBKS also failed to play a major role in the win for the team. We don’t say that the batting order of Punjab is weak. Khaleel Ahmed and Anrich Nortje are leading the bowling department of Punjab with Lalit Yadav, Shardul Thakur, Axar Patel, and Kuldeep Yadav. Shardul Thakur was the highest wicket-taker in the previous match but he leaked a lot of runs. He picked four wickets in four overs against 36 runs. Axar Patel also performed well with the ball and picked two wickets in four overs while he was charged for 14 runs. Kuldeep Yadav also picked two wickets while he leaked 14 runs in three overs. Anrich Nortje picked one wicket while Khaleel Ahmed and Lalit Yadav were the bowlers who could not pick any wicket. They have some best bowlers in the bench strength and we are sure that they will use some new bowlers in this match.

SRH vs PBKS to Head Matches

Hyderabad had faced Punjab in 19 matches where SRH had won 13 matches while Punjab had won just six matches.

Sunrisers Hyderabad had won two out of the most recent five matches they had played while Punjab Kings had also won two matches out of five recently played matches.

Punjab Kings is overall a strong team when we compare with Sunrisers Hyderabad. They have the best players in the t20 format of cricket. The batting order of this team is also strong and some well-known hitters of the t20 format are part of the squad of this team, so the winning chances of today’s match for Punjab Kings have been increased. The equation of who will win today’s cricket match prediction and who will win the cricket match today is mentioned as under.

The 70th match of IPL T20, 2022 is going to be held at the Brabourne Stadium, Mumbai. We had observed in the previous matches played here that the pitch here at this venue is good for batting in early overs. The track has a good amount of pace and bounce which allows the batsmen to the good cricketing shorts but this ground also have big boundaries which can be a plus point for the bowlers. A score of 190 plus seems to be a par score.

Shardul Thakur, Rahul Tripathi, and Kane Williamson are key players to watch in this match.

Dream11 fantasy team lineup prediction for Sunrisers Hyderabad vs Punjab Kings 70th Match IPL 2022. After checking the latest player’s availability, which players will be part of both teams, the possible tactics that the two teams might use as we had learned from previous seasons of Indian Premier League to make the best possible Dream11 team.