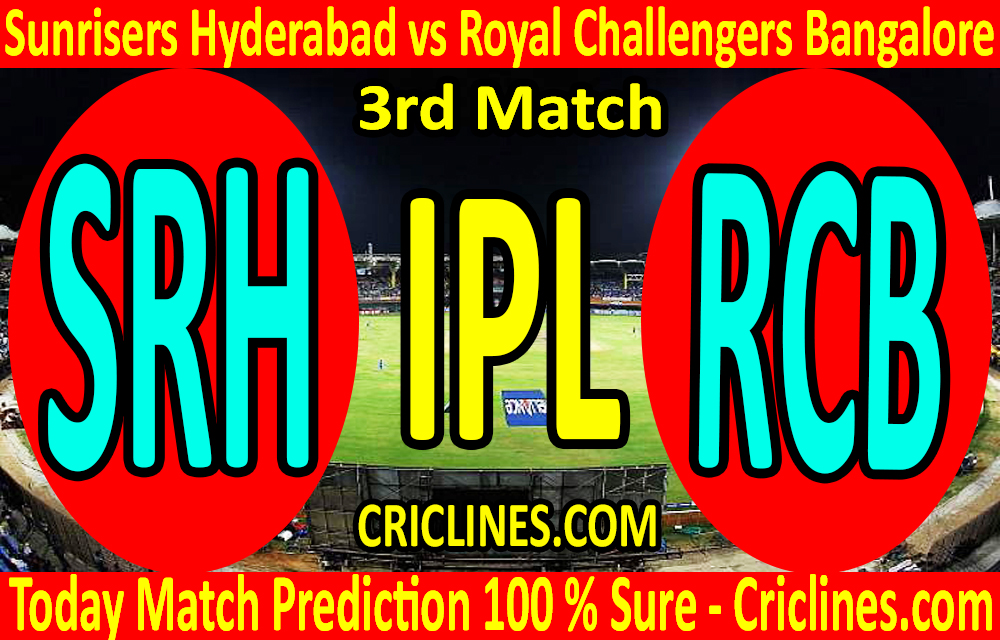 The cricket fans are ready to witness yet another big battle of the Indian Premier League. The 3rd Match match of Dream11 IPL T20 2020 is scheduled to play between Sunrisers Hyderabad and Royal Challengers Bangalore on Monday, 21st September 2020 at Dubai International Cricket Stadium, Dubai. We are posting safe, accurate, and secure today match prediction for all matches of IPL T20 free.

Sunrisers Hyderabad is the regular team of the Indian Premier League since 2013 and they had won the title of IPL for the one time back in 2016 where they beat Royal Challengers Bangalore in the final. The performance of this team was average in the previous season of IPL T20. They played a total of 14 matches at the league stage with six wins to their name. They lost eight matches and were holding the 4th position on the points table after the end of league stage matches. They were beaten by Delhi Capitals in the Eliminator match by the margin of two wickets. The management of Sunrisers Hyderabad had made some major changes in their final squad for this season of Dream11 IPL. David Warner will be leading this team in this tournament. The batting order of this team is strong at least on papers.

Royal Challengers Bangalore had been the part of the Indian Premier League since 2008 and still are searching for the title of this tournament. We had observed in the previous seasons that they come with a strong and experienced squad but unluckily, they can not qualify for the playoffs. They were the worst performing team of the previous season of IPL. Like all other teams, they also played 14 matches at the league stage with five wins to their name. They lost eight matches while their one match was ended with no result. They were laying at the bottom of the points table after the league stage matches were ended. Like the previous season, they are coming to this season of IPL T20 with a strong and experienced squad. Virat Kohli is the regular captain of the Royal Challengers Bangalore and he will also be leading this team in this edition of Dream11 IPL.

The toss is going to play an important role in the result of each and every match of the Indian Premier League as we had observed in the previous seasons. According to our IPL toss prediction, the team who will win the toss will elect to field first as there is some rain expected and can make the batting a bit difficult.

The 3rd Match match of the Indian Premier League is going to be Dubai International Cricket Stadium, Dubai. We had observed in the previous matches played here that the pitch here at this venue is good for batting. The track is slower than the others we have seen and helps the spinners quite a bit. We are hoping that the surface is bound to get slower and be a bit more difficult for batting in this match. A score of 190 is going to be tough to chase.

The weather forecast for Abu Dhabi is good for this cricket match. There are some chances of rain in the region but we are hopeful that we will have a full match to enjoy.

Dream11 fantasy team lineup prediction for Sunrisers Hyderabad vs Royal Challengers Bangalore 3rd Match match IPL 2020. After checking the latest players’ availability, which players will be part of both teams, he possible tactics that the two teams might use as we had leaned from previous seasons of Indian Premier League to make the best possible Dream11 team.