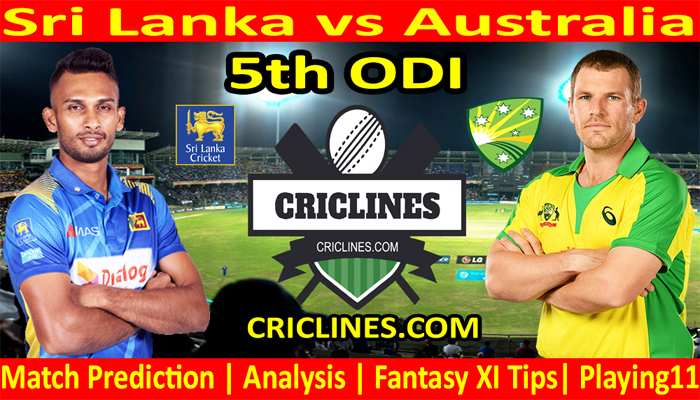 Sri Lanka had won this series of five ODI matches 3-1 unexpectedly. They lost the first match of this series but bounced back strongly and had now won three matches in a row. They had played good cricket in some conditions. The Sri Lankan team was also under pressure due to the political instability in the country. On the other hand, Australia won the T20 series and also the opening ODI match of this series but could not continue the good momentum in the next matches. The most recent match between these two teams was very interesting which Sri Lanka won with a margin of just four runs.

Sri Lanka had won the previous three matches and this happened because of the outstanding performance of the batting order. The 4th match is a big example of it where they scored 258 runs and their full team came back to the pavilion in 49 overs. Niroshan Dickwella, Pathum Nissanka, Kusal Mendis, Dhananjaya de Silva, Charith Asalanka, and Dasun Shanaka are the leading batters of Sri Lanka in this home series against Australia. Asalanka was the highest run-scorer in the previous match with a century to his name. He scored a total of 110 runs on 106 balls with the help of ten boundaries and one huge sixes. Dhananjaya de Silva was the other batter who put some runs on the board. He had 60 runs to his name on 61 balls and smashed seven boundaries during his inning.

No other batter from the side of Sri Lanka could manage to put some big runs on the board. W Hasaranga remained not out after scoring 20 runs while D Wellalage could manage to score 19 runs. The bowling department of Sri Lanka had also improved its performance. They defended the target of 259 runs in the previous match and leaked 254 runs in 50 overs. Chamika Karunaratne, Maheesh Theekshana, Wanindu Hasaranga, Dunith Wellalage, Dhananjaya de Silva, Jeffrey Vandersay, Charith Asalanka, and Dasun Shanaka are the star bowlers of Sri Lanka. Dhananjaya de Silva was the most successful bowler in the previous match with two wickets to his name in ten overs against 39 runs. Chamika Karunaratne and Jeffrey Vandersay also picked two wickets each while Dasun Shanaka, Dunith Wellalage, Wanindu Hasaranga, and Maheesh Theekshana picked one wicket each. Charith Asalanka was the only bowler from the Lankan side who could not manage to pick any wicket.

Australia lost momentum after winning the first ODI match and as a result, they lost the ODI series. Now they have a chance to lower the difference and they had to win this match at any cost. The bowling department of Australia is strong and world-class but they had not been good in the last three matches. Josh Hazlewood and Glenn Maxwell are handling the bowling department of Lewis with M Kuhnemann, Pat Cummins, Mitchell Marsh, Cameron Green, and Marnus Labuschagne. We think that they were good in the previous match where they leaked 258 runs and send the full team of Sri Lanka back to the pavilion in 49 overs. Pat Cummins was the most successful bowler in the previous match with two wickets to his name in nine overs against just 37 runs. M Kuhnemann and Mitchell Marsh also picked one wicket each.

Glenn Maxwell picked one wicket while Josh Hazlewood, Marnus Labuschagne, and Cameron Green were the bowlers who remained wicketless in the previous match. The batting order of Australia is also very strong and experienced. They performed well in the previous match but were on the losing side as they failed to chase the target of 259 runs and scored 254 runs. David Warner and Aaron Finch are opening the batting inning of Australia with Mitchell Marsh, Marnus Labuschagne, Alex Carey, Travis Head, and Glenn Maxwell available to handle the middle and lower batting order. David Warner was the highest run-scorer in the previous match but he was also unlucky as he could not complete his century and got out on a total of 99 runs. He faced 112 balls and smashed 12 boundaries during his inning. Pat Cummins scored 35 runs while Travis Head could manage to score just 27 runs.

Sri Lanka had played a total of 876 ODI matches where they won 400 while opposing teams had won 433 matches. Their 32 matches were ended with no result and five matches were tied.

Australia had played 966 ODI matches so far. They had won 583 matches and had lost 340 matches. Their 34 matches were ended with no result and nine matches were tied.

Australia had played 102 matches against Sri Lanka where they had won 62 matches while Sri Lanka had won 36 matches. Four matches between these two teams were ended with no result.

The st match of Australia vs Sri Lanka will be played at R.Premadasa Stadium, Colombo. The pitch at this stadium is good for batting but is one of the slower pitches in the Caribbean. Run-scoring is not going to be very easy and that could actually be a good thing for both teams. A total of 170 runs can be a par score

The weather forecast for Colombo on match day is not very good. Rain is predicted for most of the day and so it looks like we are going to struggle to get a game in.

Dream11 Prediction for Sri Lanka vs Australia-Sri Lanka Tri-Series 2019-5th ODI. After checking the latest players’ availability, which players will be part of both teams, the possible tactics that the two teams might use as we had learned from this series to make the best possible Dream11 team.