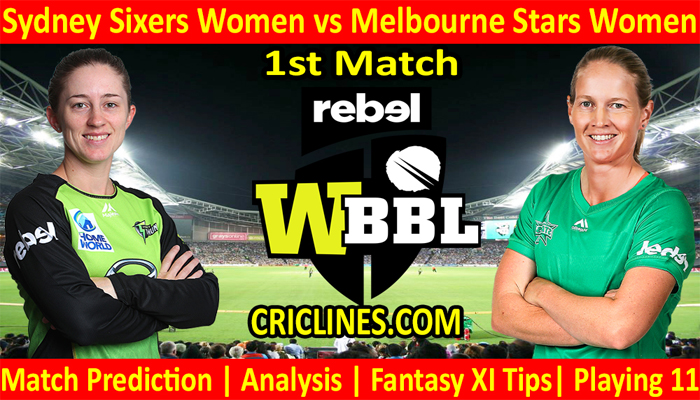 The world is ready to witness yet another big battle of the Women’s Big Bash League. The 1st Match of WBBL T20 is scheduled to play between Sydney Sixers Women and Melbourne Stars Women on Thursday, 14th October 2021 at Bellerive Oval, Hobart. We are posting safe, accurate, and 100% secure today match prediction for all matches of WBBL T20 free.

Sydney Sixers Women failed to qualify for the playoff of the last edition of WBBL. They played 14 matches at the league stage with six wins to their name. They lost six matches while their two matches were ended with no result. They were holding the 5th position on the points table after the end of the league stage matches. The management of this team had made some key changes in their final squad for this tournament. Ellyse Perry is going to lead Sydney Sixers in this season of WBBL T20, 2021.

The batting order of Sydney Sixers Women is strong and experienced at least on papers. They had added Shafali Verma in their squad, who is the best batswoman when it comes to the shorter format of cricket. Ashleigh Gardner, Nicole Bolton, Erin Burns, Alyssa Healy, and Matilda Lugg are the key batters of Sixers. The bowling department of Sydney Sixers is also strong when we compare it with the other teams of this tournament. Maitlan Brown, Stella Campbell, Lauren Cheatle, Emma Hughes, Angela Reakes, Hayley Silver-holmes, Radha Yadav, and Jade Allen will be handling the bowling unit of Sydney Sixers.

Melbourne Stars Women was the runner-up team in WBBL 2020. They were the best-performing team after the end of league stage matches. Like all other teams, they also played 14 matches at the league stage with eight wins to their name. They lost three matches while their three matches were ended with no result. They were leading the points table after the league stage matches were ended. They beat Perth Scorchers Women in the semi-final 1 match and reached to the final where they faced a heavy defeat against Sydney Thunder Women by the margin of seven wickets.

The bowling and batting order of Melbourne Stars Women is strong

Sydney Sixers Women have depth in the batting and bowling

The 1st Match of Women’s Big Bash League is going to be held at the Bellerive Oval, Hobart. We had observed in the previous matches played here that the pitch here at this venue is good for batting. The track is slower than the others we have seen and helps the spinners quite a bit. We are hoping that the surface is bound to get slower and be a bit more difficult for batting in this match. A score of 160 is going to be tough to chase.

Dream11 fantasy team lineup prediction for Sydney Sixers Women vs Melbourne Stars Women 1st Match WBBL 2021. After checking the latest player’s availability, which players will be part of both teams, he possible tactics that the two teams might use as we had learned from previous seasons of Women’s Big Bash League to make the best possible Dream11 team.