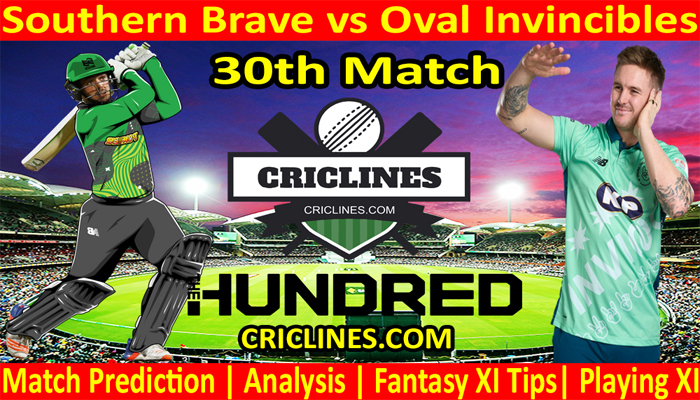 The world is ready to witness yet another big battle of The 100 League. The 30th Match of The Hundred League 2021 is scheduled to play between Southern Brave and Oval Invincibles on Monday, 16th August 2021 at The Rose Bowl, Southampton. We are posting safe, accurate, and secure today match predictions for all matches of The Hundred Women Competition free.

The performance of Southern Brave had been average in this edition of The Hundred League so far. They had played a total of seven matches with four wins to their name. They had lost two matches while their one match was ended with no result. They are situated at the 4th spot on the points table. They are coming to this match on the back of a massive win over Welsh Fire in their most recent match with a handsome margin of eight wickets.

Oval Invincibles is the other team who had been good in this tournament so far. They also had won four out of seven matches played. They had lost two matches while their one match was washed out by the rain. They are equal in the points with Southern Brave but due to a good run rate, they are holding the 3rd position on the points table. They had beaten London Spirit in their previous match with the margin of two wickets.

Oval Invincibles is full of experienced and young players of the t20 format. The batting order of this team is also strong and some well-known hitters of the t20 format are part of the squad of this team, so the winning chances of today’s match for Oval Invincibles have been increased. The equation of who will win today’s cricket match prediction and who will win the cricket match today is mentioned as under.

The toss will play an important role in the decision of all matches of The Hundred League. Having a good total on the board is always a big advantage in these kinds of big matches. According to our toss prediction, the team that will win the toss may choose to bat first.

The 30th Match match of The Hundred League 2021 is going to be held at The Rose Bowl, Southampton. We had observed in the previous matches played here that the pitch here at this venue is good for batting. The track is slower than the others we have seen and helps the spinners quite a bit. We are hoping that the surface is bound to get slower and be a bit more difficult for batting in this match. A score of 185 is going to be tough to chase.

Who Will Win Southern Brave vs Oval Invincibles, 30th Match The Hundred League-2021