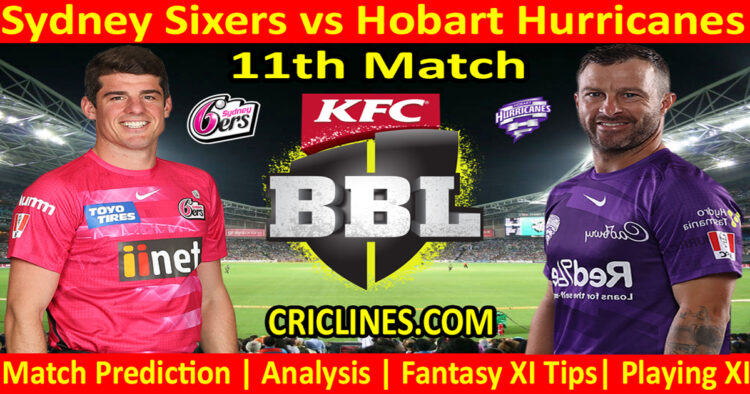 The world is ready to witness yet another big battle of BBL T20. The 11th match of Big Bash League 2022-23 is scheduled to play between Sydney Sixers and Hobart Hurricanes on Thursday, 22nd December 2022 at Sydney Cricket Ground, Sydney. We are posting safe, accurate, and secure today match prediction of BBL T20.

The performance of Hobart Hurricanes had been good in this tournament than the Sixers this tournament. They also had played two matches with one win to their name. They had lost one match and are holding the fifth position on the ladder. Their most recent match was very close against Perth Scorchers where they won the match with a margin of just eight runs.

The bowlers of Sydney Sixers did well in the previous match but their batting order totally collapsed and that was a key reason why they lost the match. They lost the toss and were asked to field first. The performance of their bowling unit was good and they leaked 155 runs in 20 overs. They used six bowlers and almost each and every bowler from their side performed well. Jackson Bird was the most successful and highest wicket-taker from their side picking three wickets in four overs against 26 runs. Izharulhaq Naveed also performed well and picked two wickets while he was charged for 22 runs in four overs. Naveen-ul-Haq, Sean Abbott, Hayden Kerr, and Daniel Christian were the bowlers who failed to pick any wicket in the previous match.

Sydney Sixers have some best batsmen of white ball cricket like James Vince, Josh Philippe, Moises Henriques, Jordan Silk, Daniel Christian, and Kurtis Patterson but they totally failed to give the best performance in their most recent match and they could manage to score just 117 runs in 20 overs while chasing the target of 156 runs. Just two batsmen of Sydney Sixers could manage to enter into the double figure. Hayden Kerr was the highest run-scorer from their side with 42 runs to his name on 35 balls with the help of one boundary and three huge sixes. Jordan Silk also performed well and scored 41 runs. He faced 35 balls and smashed five boundaries and two huge sixes. Moises Henriques failed to open the account on the scoreboard while Josh Philippe scored just six runs and James Vince could manage to score nine runs. Daniel Christian and Izharulhaq Naveed scored one run each while Jackson Bird and Naveen-ul-Haq scored just two runs each.

Hobart Hurricanes lost their opening match against Melbourne Stars but they bounced back strongly and won the next match against Perth Scorchers. The performance of their batting order was just outstanding and they put a total of 172 runs on the board in 20 overs. The skipper, Matthew Wade was the most successful and highest run-scorer from their side scoring 51 runs on just 29 balls with the help of five boundaries and two huge sixes. Tim David also had an outstanding performance with the bat and scored 46 runs. He faced 28 balls and smashed four boundaries and one huge six. D Arcy Short scored 35 runs while Shadab Khan could manage to score 22 runs. Ben McDermott failed to open the account on the scoreboard.

The bowling unit of Hobart Hurricanes did not perform well but they managed to defend the target of 173 runs and leaked 164 runs in 20 overs. Patrick Dooley was the most successful and highest wicket-taker from their side. He picked up four wickets in four overs while he was charged with just 16 runs. Riley Meredith was the other bowler who was just good with the ball and picked two wickets in four overs while he leaked 36 runs. Shadab Khan also performed well and picked one wicket in four overs while he was charged for 22 runs. Nathan Ellis also picked one wicket but he leaked plenty of runs. He was charged with 38 runs in four overs. Joel Paris and James Neesham were the bowlers who failed to pick any wicket in the previous match. If the bowling unit of the Hurricanes performs well in this match, we are sure that they will be on the winning side.

Patrick Dooley, Shadab Khan, and Matthew Wade are key players to watch in this match.

The 11th match of Big Bash League 2022-23 is going to be held at Sydney Cricket Ground, Sydney. We had observed in the previous matches played here that the pitch here at this venue is good for batting. The track is slower than the others we have seen and helps the spinners quite a bit. We are hoping that the surface is bound to get slower and be a bit more difficult for batting in this match. A score of 185 is going to be tough to chase.

We had provided you with the above-mentioned BBL T20 Prediction on the basis of our research, understanding, and analysis. These prediction tips have also based on the reports that we have from our different sources. You can consider the point we had provided you and the decision will be yours that you will have to make at your own risk.