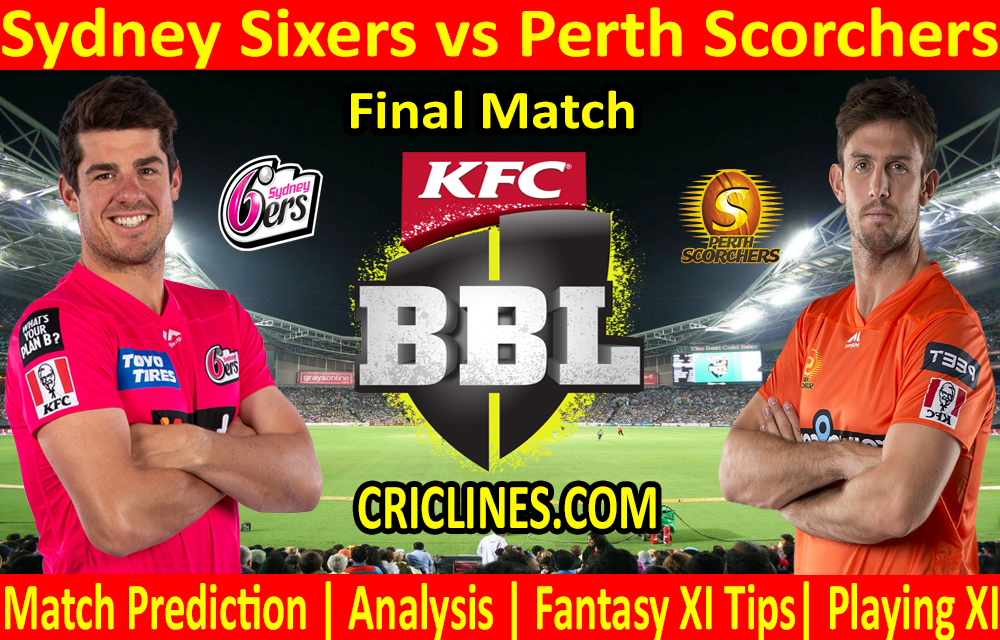 The cricket fans are ready to witness yet another big battle of BBL T20. The Final of Big Bash League 2020-21 is scheduled to play between Sydney Sixers and Perth Scorchers on Saturday, 6th February 2021 at Sydney Cricket Ground, Sydney. We are posting safe, accurate, and secure today match prediction for all matches of BBL free.

Sydney Sixers remained the best performing team of the 10th season of the Big Bash League. They played a total of 14 matches at the league stage with nine wins to their name. They lost five matches were leading the points table of BBL T20 after the end of the league stage matches. They availed the first chance to qualify for the final and beat Perth Scorchers in the qualifier match by a handsome margin of nine wickets. They lost the toss and were asked to field first. The way how their batting order performed in that match was just outstanding. They leaked 167 runs in their inning of 20 overs. Ben Dwarshuis was the most successful and highest wicket-taker from their side who picked two wickets in his four overs bowled out while he leaked plenty of runs. He was charged for 40 runs in his four overs.

Steve OKeefe, Carlos Brathwaite, Sean Abbott, and Jackson Bird picked one wicket each in the qualifier match against Perth Scorchers. Like the bowling, the batting order of Sydney Sixers also had an outstanding performance in the previous match. They chased the target of 168 runs in just 17 overs. James Vince was the most successful and highest run-scorer from their side who remained not out after scoring 98 runs. He faced 53 deliveries and smashed 14 boundaries and one six. Josh Philippe also had an outstanding performance in the previous match. He scored 45 runs on 28 deliveries with the help of four boundaries and two sixes. Daniel Hughes was the other batsman from the Sixers side who had some runs to his name. He scored 21 runs and remained not out till the chase of the target.

Perth Scorchers is the other team that had an outstanding performance in this season of the BBL T20. Like all other teams, they also played a total of 14 matches at the league stage with eight wins to their name. They lost five matches while their one match was ended with no result. They were holding the 2nd position on the points table after the end of the league stage matches. They failed to avail themselves the first chance to make their way to the final but they succeed in avail the second chance and won the challenger match against Brisbane Heat with a handsome margin of 49 runs. That was a rain-affected match and was decided through the DLS method. They lost the toss and were asked to bat first. The performance of their batting order was just outstanding. They scored a total of 189 runs in 18.1 overs. Liam Livingstone was the most successful and highest run-scorer from their side who scored 77 runs. He faced 39 deliveries and smashed five boundaries and six huge sixes.

Cameron Bancroft was the other batsman from their side who put some runs on the board. He scored 58 runs on 42 deliveries and smashed six boundaries. He remained not out till the end of their inning. Mitchell Marsh also had an outstanding performance with the bat. He scored 49 runs while he faced 28 deliveries and smashed five boundaries and two sixes. He also remained not out. Like the batting, the bowling unit of Perth Scorchers also performed well in the previous match. They defended the target of 199 runs and leaked 150 runs in their inning of 18 overs. Aaron Hardie was the highest wicket-taker from their side but he leaked plenty of runs. He was charged for 46 runs in his four overs bowled out and picked three wickets. Jason Behrendorff, Andrew Tye, and Fawad Ahmed picked two wickets each in the previous match.

The Final match of Big Bash League 2020-21 is going to be held at Sydney Cricket Ground, Sydney. We had observed in the previous matches played here that the pitch here at this venue is good for batting. The track is slower than the others we have seen and helps the spinners quite a bit. We are hoping that the surface is bound to get slower and be a bit more difficult for batting in this match. According to the live cricket score, a total of 185 is going to be tough to chase.