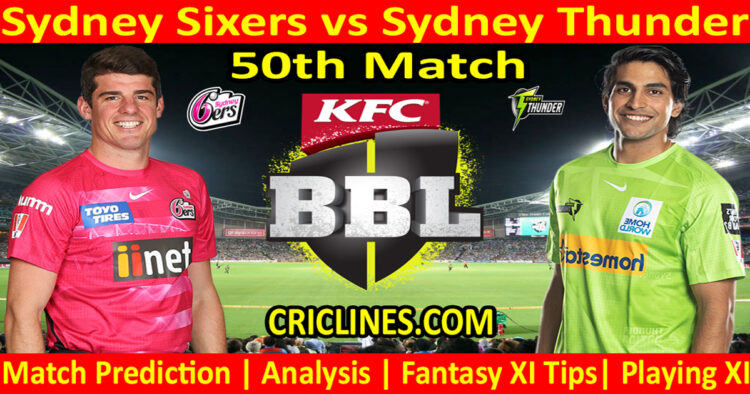 The world is ready to witness yet another big battle of BBL T20. The 50th match of Big Bash League 2022-23 is scheduled to play between Sydney Sixers and Sydney Thunder on Saturday, 21st January 2023 at Sydney Cricket Ground, Sydney. We are posting safe, accurate, and secure today match prediction of BBL T20.

Nathan Lyon had been the best bowler for Sydney Sixers and now he is not available for some next matches due to a knee injury. Sydney Sixers have still strength in their bowling unit. Sean Abbott had just been impressive in the previous match and picked 20 wickets. Hayden Kerr also performed well in the previous matches and has 14 wickets to his name in previous matches. The batting squad of Sydney Thunder also had been good. Josh Philippe had scored 231 runs so far while Patterson had scored 197 runs.

Sydney Sixers had beaten Adelaide Strikers in their most recent match with a handsome margin of 59 runs. The performance of their batting order was just amazing and they scored 203 runs in 20 overs. Steven Smith was the highest run-scorer with 101 runs to his account. He became the first ever batsman of Sydney Sixers who had scored a century in this tournament. Kurtis Patterson scored 43 runs. The bowling unit of Sydney Sixers also performed well and leaked 144 runs. They send the full team of Adelaide Strikers in 19 overs. Ben Dwarshuis and Todd Murphy picked three wickets each while Steve OKeefe picked two wickets.

Sydney Thunder surprised its fans in their previous match against Melbourne Renegades where they won with a handsome margin of eight wickets. The performance of their bowling unit was just good. They leaked 142 runs in 20 overs. Usman Qadir was the most successful bowler from their side with two wickets to his name in four overs against 20 runs. The skipper, Chris Green also performed well and picked two wickets in four overs while he was charged for 24 runs. McAndrew, Daniel Sams, and Brendan Doggett picked one wicket each.

The batting order of Sydney Thunder was struggling in the previous matches but they bounced back strongly in the most recent match and chased the target of 143 runs in 19.3 overs. Matthew Gilkes proved the most successful and highest run-scorer from their side. He scored 74 runs on 55 balls with the help of seven boundaries and one huge six. He remained not out till the chase of the target. Alex Ross also had an outstanding performance with the bat and remained not out after scoring 40 runs. He faced 32 balls and smashed four boundaries and one huge six. Oliver Davies failed to open the account on the scoreboard.

Matthew Gilkes, Ben Dwarshuis, and Steven Smith are key players to watch in this match.

The toss will play an important role in the decision of all matches of the Big Bash League. Having a good total on the board is always a big advantage in these kinds of big matches. According to the toss prediction, the team who will win the toss may choose to bat first.

The 50th match of Big Bash League 2022-23 is going to be held at Sydney Cricket Ground, Sydney. We had observed in the previous matches played here that the pitch here at this venue is good for batting. The track is slower than the others we have seen and helps the spinners quite a bit. We are hoping that the surface is bound to get slower and be a bit more difficult for batting in this match. A score of 185 is going to be tough to chase.