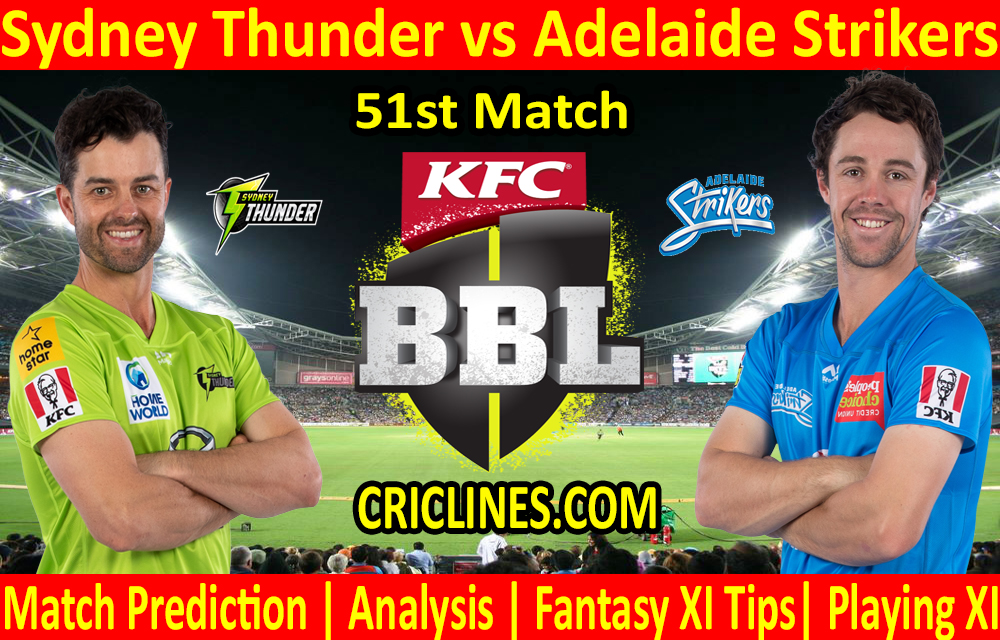 The cricket fans are ready to witness yet another big battle of BBL T20. The 51st Match of Big Bash League 2020-21 is scheduled to play between Sydney Thunder and Adelaide Strikers on Sunday, 24th January 2021 at Adelaide Oval, Adelaide. We are posting safe, accurate, and secure today match prediction for all matches of BBL free.

Sydney Thunder had performed average in this season of the BBL T20. They had played a total of 12 matches with seven wins to their name. They had lost five matches and are holding the 3rd position on the points table. They had two matches left which are must-win for this team. They had won their most recent match against their city fellow team, Sydney Sixers with a handsome margin of 46 runs. They lost the toss and were asked to bat first. The way how their batting order performed in that match was just outstanding. They put a total of 232 runs in their inning of 20 overs. Alex Hales was the most successful and highest run-scorer from their side who scored 110 runs while he faced 56 deliveries and smashed nine boundaries and eight sixes. The skipper, Callum Ferguson also put some runs on the board. He scored 42 runs on 23 deliveries with the help of three boundaries and the same huge sixes.

Sam Billings and Ben Cutting scored 33 runs each in the previous match. Usman Khawaja once again failed in this match and could manage to score just six runs. The performance of the bowling unit of Sydney Thunder failed to give their best performance but they defended the target of 233 runs. They were charged for 186 runs in their inning of 20 overs. Tanveer Sangha was the most successful and highest wicket-taker from their side who picked two wickets in his four overs bowled out while he was charged for 34 runs. Brendan Doggett and Ben Cutting picked one wicket each while Adam Milne, Nathan McAndrew, and Chris Green failed to pick any wicket.

The performance of Adelaide Strikers had been average in this season of the Big Bash League. They had won six out of 12 matches played so far. They had lost six matches and are holding the 5th position on the points table. They had won their most recent match against Brisbane Heat with a handsome margin of 82 runs. They won the toss and decided to bat first. The performance of their batting order was outstanding. They scored a total of 197 runs in their inning of 20 overs. Alex Carey was the most successful and highest run-scorer from their side who scored 101 runs while he faced 62 deliveries and smashed 10 boundaries and three sixes. Jake Weatherald scored 36 runs while Philip Salt had 26 runs to his name.

Like the batting, the bowling unit of Adelaide Strikers also performed well in the previous match. They defended the target of 198 runs and send the all team of Brisbane Heat back to the pavilion on a total of 115 runs in 17.3 overs. Almost all bowlers from their side performed well in that match. Wes Agar was the most successful and highest wicket-taker from their side who picked four wickets in his four overs bowled out while he was charged for 26 runs. Peter Siddle also had an outstanding performance with the ball in the previous match. He picked three wickets in 2.3 overs bowled out against just 13 runs. Michael Neser, Danny Briggs, and Liam O Connor picked one wicket each in the previous match.

Head to Head Record Between Sydney Thunder and Adelaide Strikers

The 51st Match of Big Bash League 2020-21 is going to be held at Adelaide Oval, Adelaide. We had observed in the previous matches played here that the pitch here at this venue is good for batting. The track is slower than the others we have seen and helps the spinners quite a bit. We are hoping that the surface is bound to get slower and be a bit more difficult for batting in this match. As per the live cricket score, a target of 185 is going to be tough to chase.