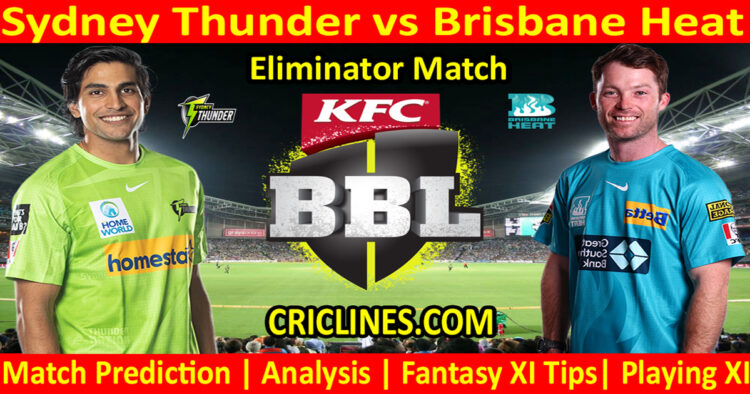 The world is ready to witness yet another big battle of BBL T20. The Eliminator match of Big Bash League 2022-23 is scheduled to play between Sydney Thunder and Brisbane Heat on Friday, 27th January 2023 at Sydney Showground Stadium, Sydney. We are posting safe, accurate, and secure today match prediction of BBL T20.

The previous match of the Big Bash League changed the points table totally. Hobart Hurricanes beat Brisbane Heat and many of us were expecting that Hurricanes will make their way to the playoff and they were even celebrating. The win of the Thunder over the Stars changed the things for Heat and now they are playing the Eliminator match. We know that the loser of this match will come back while the winner will move forward.

Sydney Thunder used seven bowlers in the previous match where Usman Qadir was the most successful and highest wicket-taker from their side with three wickets to his name in four overs against 24 runs. The skipper, Chris Green also performed well and picked two wickets in four overs while he was charged with 19 runs. Gurinder Sandhu and Daniel Sams picked one wicket each while McAndrew, Ben Cutting, and Jason Sangha were the bowlers who failed to pick any wicket. The batting order of the Thunder was not much impressive but they chased the target of 120 runs in 18.5 overs. Daniel Sams was the highest run-scorer with 28 runs to his name while Matthew Gilkes scored 20 runs.

Brisbane Heat won four matches in a row but was beaten by Hobart Hurricanes by the margin of just two runs. The bowling unit of the Heat did its job in a proper way but their batting order totally collapsed and that was a key reason why the lost the match. They leaked just 120 runs in 20 overs. Michael Neser was the most successful and highest wicket-taker from their side with four wickets to his name in four overs against 35 runs. Spencer Johnson also performed well and picked two wickets while he was charged for 20 runs in four overs.

James Bazley, Matthew Kuhnemann, and Mitchell Swepson picked one wicket each. Brisbane Heat lost the previous match due to the worst performance by their batting order. They could manage to score just 118 runs while chasing the target of 121 runs. Jimmy Peirson was the most successful and highest run-scorer from their side with 39 runs to his name on 37 balls with the help of four boundaries. Sam Hain was the other batsman who put some runs on the board. He scored 26 runs but he destroyed 34 balls. James Bazley and the skipper, Usman Khawaja scored 10 runs each while no other batsman from their side could even enter into the double figure.

Michael Neser, Daniel Sams, and Usman Qadir are key players to watch in this match.

Sydney Thunder is full of experienced and young players in the t20 format. The batting order of this team is also strong and some well known hitters of the t20 format are part of the squad of this team, so the winning chances of today’s match for Sydney Thunder have been increased. The equation of who will win today’s cricket match prediction and who will win the cricket match today is mentioned as under.

The Eliminator match of Big Bash League 2022-23 is going to be held at Sydney Showground Stadium, Sydney. We had observed in the previous matches played here that the pitch here at this venue is good for batting. The track is slower than the others we have seen and helps the spinners quite a bit. We are hoping that the surface is bound to get slower and be a bit more difficult for batting in this match. A score of 185 is going to be tough to chase.