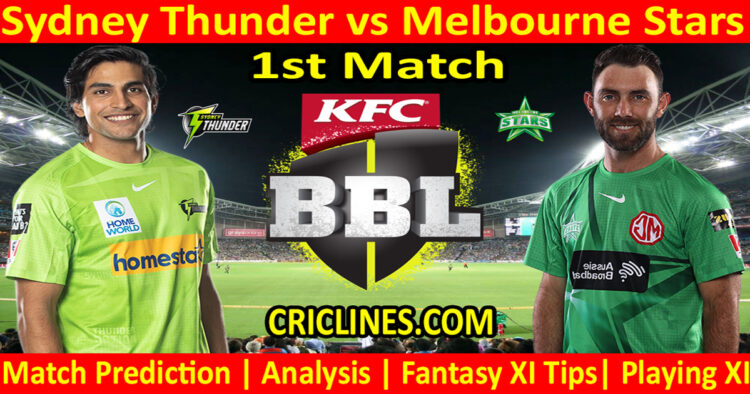 The world is ready to witness yet another big battle of BBL T20. The 1st match of Big Bash League 2022-23 is scheduled to play between Sydney Thunder and Melbourne Stars on Tuesday, 13th December 2022 at Manuka Oval, Canberra. We are posting safe, accurate, and secure today match prediction of BBL T20 free.

Sydney Thunder performed well in this previous edition of the Big Bash League. They played a total of 14 league matches with nine wins to their name. They lost five matches and were holding the third position on the table but they were beaten by Adelaide Strikers in the Knockout match. They had made some changes in their squad and will be hoping for the best results.

The performance of Melbourne Stars was average in the previous season of this tournament. They could manage to win just seven out of 14 league matches. They lost seven matches and were situated at the sixth position on the ladder and could not qualify for the playoff. They also added some strength in the batting and bowling units.

Usman Khawaja was leading Sydney Thunder in the previous season of Big Bash League but now they had appointed Chris Green as their new leader. They had also added some best batsmen in their squad for this tournament. Alex Hales had been just outstanding in T20 World Cup and he will open the batting inning for Thunders. We think David Warner will be his second opening partner. David Warner is an experienced batsman and can be dangerous in power play overs. Alex Ross, Rilee Rossouw, and Jason Sangha are the other main batsmen of the Thunders. Oliver Davies is a batting all-rounder while Matthew Gilkes and Baxter Holt are wicketkeepers in the squad of Sydney Thunders.

Sydney Thunder had picked some best bowlers of T20 cricket for this tournament. The skipper, Chris Green will be leading the bowling unit with Brendan Doggett and Nathan McAndrew. Chris Green is an off-spinner and a middle-order-batter. He can be dangerous on the pitches in Australia in batting and bowling. They had picked Usman Qadir, who is the son of legendary Pakistan leg spinner Abdul Qadir and is a wrist spinner. He can also create a lot of problems for the batsmen of other teams. He had played 23 T20 matches for Pakistan and had picked 29 wickets with an average of 19.07. Fazalhaq Farooqi is also part of the squad of this team. He is an Afghan national and had played 17 T20 International matches for Afghanistan. He had picked 21 wickets and his average is 20.50. He also has a decent economy rate of just 6.77. Tanveer Sangha is also available for Thunders.

Melbourne Stars were good in the previous edition of BBL T20 and we are also expecting the same kind of performance from this team in this tournament. Glenn Maxwell was leading the Stars in the previous edition of the Big Bash League and he also is leading in this season of BBL. They had added some extra strength in their batting squad. Clint Hinchliffe, Brody Couch, Joe Burns, Nick Larkin, and Beau Webster are leading batsmen of the Stars. Joe Clarke is the only wicket-keeper in the squad of the Stars while Hilton Cartwright, Marcus Stoinis, and Campbell Kellaway are batting all-rounders in the squad of the Stars.

Melbourne Stars had picked some best bowlers of the T20 format of cricket. Trent Boult and Adam Zampa will lead the bowling unit of the Stars with Nathan Coulter-Nile. He had played 27 matches with 34 wickets to his name with an average of 23.59. Adam Zampa had played 72 T20 International matches and had picked 82 wickets with an economy of just 6.93. Trent Boult is also an experienced bowler from New Zealand. He had played 55 T20I matches and had picked 74 wickets with an average of 22.26. He also played 78 matches in IPL and picked 92 wickets. His average in IPL is 26.9. Liam Hatcher is the other bowler who is in the squad the Stars.

Adam Zampa, Chris Green, and Glenn Maxwell are key players to watch in this match.

The 1st match of Big Bash League 2022-23 is going to be held at Manuka Oval, Canberra. We had observed in the previous matches played here that the pitch here at this venue is good for batting. The track is slower than the others we have seen and helps the spinners quite a bit. We are hoping that the surface is bound to get slower and be a bit more difficult for batting in this match. A score of 185 is going to be tough to chase.