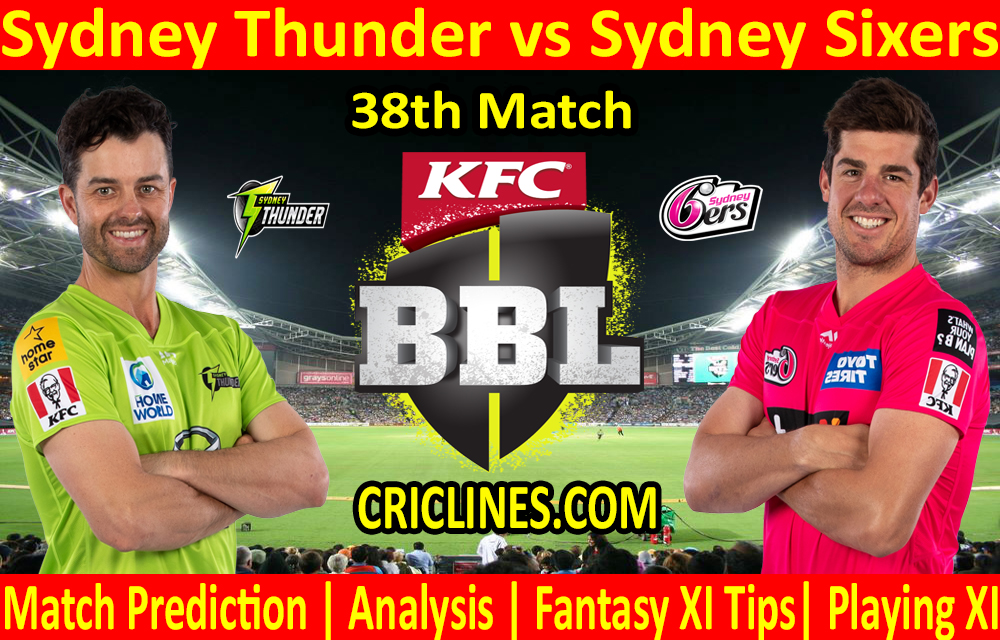 The world is ready to witness yet another big battle of BBL T20. The 38th Match of Big Bash League 2020-21 is scheduled to play between Sydney Thunder and Sydney Sixers on Wednesday, 13th January 2021 at Manuka Oval, Canberra. We are posting safe, accurate, and secure today match prediction for all matches of BBL free.

Both city fellow teams, Sydney Thunder and Sydney Sixers had performed well in this season of the Big Bash League so far and are in the list of top-performing teams. Sydney Thunder had played a total of nine matches with six wins to their name. They had lost three matches and are holding the 2nd position on the points table. They were beaten by Perth Scorchers in their previous match by a margin of 17 runs. They won the toss and were asked to field first. Their bowling unit almost failed to give their best performance. They leaked 185 runs in their inning of 20 overs. Brendan Doggett was the only successful bowler from their side who picked four wickets in his four overs bowled out against just 22 runs. Nathan McAndrew and Ben Cutting picked one wicket each.

The batting department of Sydney Thunder performed well but they failed to chase the target of 186 runs and could manage to score 168 runs in their inning of 20 overs. Sam Billings was the most successful and highest run-scorer from their side who scored 83 runs on just 48 deliveries with the help of eight boundaries and four sixes. Ben Cutting also had a good performance with the bat in the previous match. He scored 31 runs while Usman Khawaja had 26 runs to his name. No other batsmen from their side could even enter into double-figure. The skipper, Callum Ferguson, Alex Ross, and Tanveer Sangha failed to open the account on the scoreboard.

Sydney Sixers is the best performing team of this tournament right now. They had won six out of nine matches played so far. They had lost three matches and are leading the bbl points table with 25 points and a good run rate. They are coming to this match on the back of a massive win over Brisbane Heat in their most recent match by the margin of three wickets. They won the toss and decided to field first. The bowling unit of Sixers performed well in the previous match. They leaked 148 runs in their 20 overs inning. Carlos Brathwaite was the most successful and highest wicket-taker from their side who picked four wickets in his four overs bowled out against just 18 runs.

Jake Ball was the other bowlers from the Sixer’s side who performed well in the previous match. He picked three wickets in just two overs bowled out while he leaked 25 runs. Jackson Bird picked two wickets while Daniel Christian had one wicket to his name. The batting order of Sydney Sixers failed to perform well in the previous match but they chased the target of 149 runs on the last ball of their inning. Daniel Christian was the most successful and highest run-scorer from their side who remained not out after scoring 61 runs. He faced 38 deliveries and smashed three boundaries and five sixes. The skipper, Daniel Hughes was the other batsman who put some runs on the board. He scored 51 runs on 35 deliveries and smashed six boundaries.

Head to Head Record Between Sydney Thunder and Sydney Sixers

The skipper of Sydney Sixers, Daniel Hughes has an outstanding record while playing against the thunders. He had scored a total of 373 runs against this team.

Fawad Ahmed had taken 13 wickets against the Sixers and Usman Khawaja had scored 199 runs against Sydney Sixers.

The 38th Match of Big Bash League 2020-21 is going to be held at Manuka Oval, Canberra. We had observed in the previous matches played here that the pitch here at this venue is good for batting. The track is slower than the others we have seen and helps the spinners quite a bit. We are hoping that the surface is bound to get slower and be a bit more difficult for batting in this match. The live cricket score is showing that a total of 185 is going to be tough to chase.