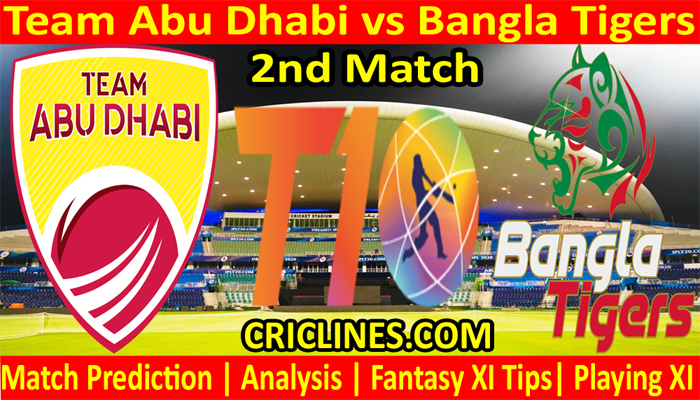 The world is ready to witness yet another big battle of the Abu Dhabi T10 League. The 2nd match of the T10 League is scheduled to play between Team Abu Dhabi and Bangla Tigers on Friday, 19th November 2021 at Sheikh Zayed Stadium, Abu Dhabi. We are posting a safe, accurate, and secure today match prediction of Abu Dhabi T10 League free.

Team Abu Dhabi is a team that has a strong batting order in their squad. The best batters of the shorter format of cricket like Liam Livingstone, Chris Gayle, Colin Ingram, Philip Salt, and Daniel Bell-Drummond are the key batters of this team while Paul Stirling and Rohan Mustafa are the batting all-rounders in this team.

The bowling unit of Team Abu Dhabi also has some best bowlers in their squad. Naveen ul Haq, Fidel Edwards, Ahmad Daniyal, Danny Briggs, Marchant de Lange, Muhammad Farazuddin, Sheldon Cottrell, Noor Ahmad, and Farooq Momand are available to choose the best bowler for this first match. Team Abu Dhabi is a strong batting side but we don’t think that the above-mentioned bowling unit is strong and they can compete against the strong batting orders of the other teams of this tournament.

Faf du Plessis Bangla Tigers is going to lead Bangla Tigers in this fifth edition of the Abu Dhabi T10 League. The batting order of this team is strong and experienced at least on papers. Johnson Charles, Hazratullah Zazai, Will Smeed, Adam Lyth, and Chirag Suri are the main batters of this team. Bangla Tigers is the team that has some best all-rounders in their squad.

Benny Howell, James Faulkner, Will Jacks, Isuru Udana, Luke Wood, and Luke Fletcher are all-rounders in this team while Andre Fletcher is also part of the squad of Bangla Tingers as a wicket-keeper batsman. Mohammad Amir, Qais Ahmad, Sabir Rao, Hassan Khalid, Karim Jannat, Tom Hartley, and Vishnu Sukumaran are going to lead the bowling unit of this team.

The 2nd match of the T10 League is going to be played at Sheikh Zayed Stadium, Abu Dhabi. This venue has one of the flattest and completely dead tracks we have seen in the past. We are expecting a slow, flat, and good batting surface for this match. A score of more than 120 runs should be a par score.

Chris Gayle, Mohammad Amir, and Faf du Plessis are key players to watch in this match.

The dream11 team prediction for Team Abu Dhabi vs Bangla Tigers 2nd match T10 League. After checking the latest player’s availability, which players will be part of both teams, the possible tactics that the two teams might use as we had learned from previous seasons of T10 League to make the best possible Dream11 team.