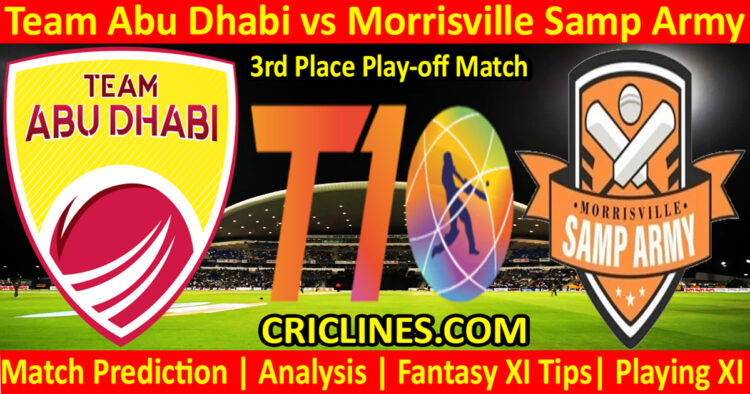 Team Abu Dhabi is the third-best-performing team in the Abu Dhabi T10 League and they won four out of seven league matches. They lost just two matches while their one match was tied. They are holding the third position on the ladder. They lost their first chance to qualify for the final as they were beaten by Deccan Gladiators in an eliminator match.

Morrisville Samp Army was good in the opening matches of this tournament but lost some matches in the middle of the tournament. They are the second-best performers in this tournament. They played seven league matches with five wins to their name. They lost two matches and are holding the second position on the table. They had two chances to reach the final but they failed to avail both chances. They lost a qualifier match against New York Strikers and were beaten by Deccan Gladiators in a qualifier 2 match.

Team Abu Dhabi lost their most important match against Deccan Gladiators by the margin of just five runs. The way how their bowling unit performed in the previous match was just outstanding. They leaked 94 runs in 10 overs. Naveen-ul-Haq was the most successful and highest run-scorer from their side with two wickets to his name in two overs against just 10 runs. Fabian Allen was the other bowler who was good with the ball. He picked one wicket in two overs while he leaked 11 runs. Peter Hatzoglou and Adil Rashid also picked one wicket each while Andrew Tye was the only bowler from their side who failed to pick any wicket.

Team Abu Dhabi lost the previous match due to the worst performance by their batting order. They failed to chase the target of 96 runs and scored just 89 runs in 10 overs. James Vince was the most successful and highest run-scorer from their side with 21 runs to his name on 15 balls with the help of three boundaries. Adil Rashid also had an outstanding performance with the bat and scored some runs. He remained not out after scoring 18 runs. He remained not out till the 10th over and faced just nine balls. He also smashed two huge sixes during his inning. The skipper, Chris Lynn also had an outstanding performance with the bat. He scored 13 runs on just five balls. No other batsmen from their side could manage to enter into the double figures.

Morrisville Samp Army lost two important matches and failed to qualify for the final. They lost the qualifier 1 match against New York Strikers and were beaten by Deccan Gladiators in the qualifier 2 match by a big margin of eight wickets. They lost the toss and were asked to bat first. The performance of their batting order was good and they scored 119 runs in 10 overs. The skipper, Moeen Ali was the most successful and highest run-scorer from their side who remained not out after scoring 78 runs on just 29 balls with the help of six boundaries and the same huge sixes. David Miller was the other batter who put some runs on the board. He scored 16 runs while Shemron Hetmyer scored 10 runs.

The bowling unit of Morrisville Samp Army was not much impressive in the previous match and they failed to defend the target of 120 runs. They leaked this target in 9.4 overs. Dwaine Pretorius was the only successful bowler from their side with one wicket to his name in two overs against 21 runs. Karim Janat also picked one wicket but he leaked a lot of runs. He was charged with 24 runs in two overs. No other bowler from their side could manage to pick any wicket. Sheldon Cottrell, Maheesh Theekshana, and Chamika Karunaratne were the bowlers who failed to pick any wicket in the previous match. We are sure that Morrisville Samp Army will secure the third-best team of the Abu Dhabi T10 League but for this, they have to give the best performance in each and every department of the game and we think that they will perform well in this match.

The 3rd Place Play-off Match of the T10 League is going to be played at Sheikh Zayed Stadium, Abu Dhabi. This venue has one of the flattest and completely dead tracks we have seen in the past. We are expecting a slow, flat, and good batting surface for this match. A score of more than 120 runs should be a par score.

Alex Hales, Moeen Ali, and Naveen-ul-Haq are key players to watch in this match.

The dream11 team prediction for Team Abu Dhabi vs Morrisville Samp Army 3rd Place Play-off Match T10 League. After checking the latest player’s availability, which players will be part of both teams, and the possible tactics that the two teams might use as we had learned from previous seasons of Abu Dhabi T10 League to make the best possible Dream11 team.