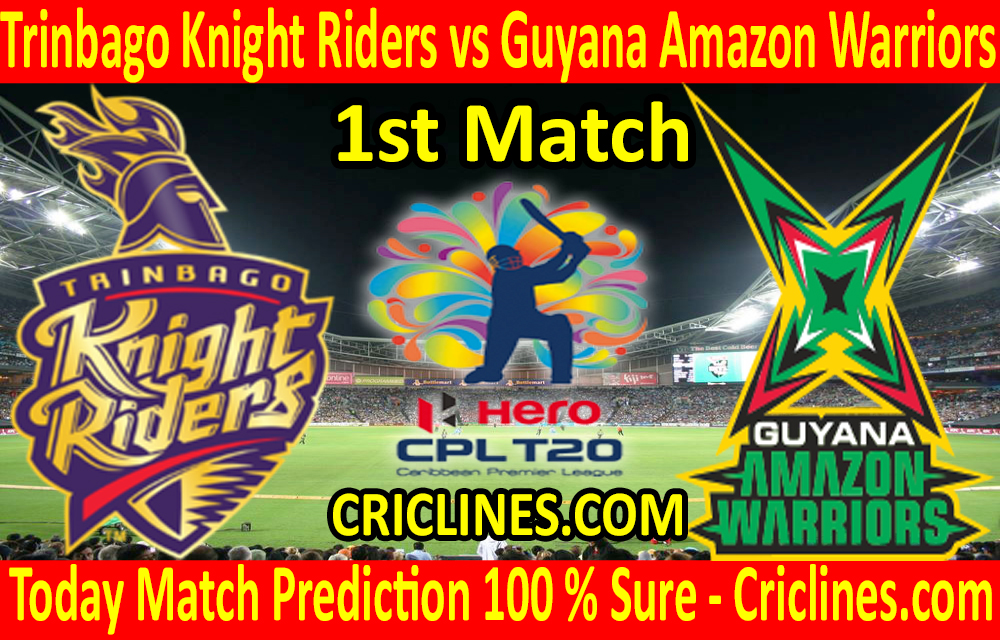 The world is ready to witness yet another big battle of the Caribbean Premier League. The 1st Match match of CPL 2020 is scheduled to play between Trinbago Knight Riders and Guyana Amazon Warriors on Tuesday, 18th August 2020 at Brian Lara Stadium, Tarouba, Trinidad. We are posting safe, accurate, and secure today match prediction for all matches of CPL free.

Trinbago Knight Riders is a team that had been strong in almost all seasons of the Caribbean Premier League but in the last season, they failed to give their best performance and they will be confident to give their outstanding performance during this season. They could manage to win just four out of ten matches played at the league stage in the previous season of CPL. They lost five matches while their one match was ended with no result. They were holding the 4th position on the points table after the end of league stage matches. They won the Eliminator match against St Kitts and Nevis Patriots but were beaten in the qualifier two by Barbados Tridents.

Trinbago Knight Riders will have a good season of CPL if their batting order gets on fire. There are some seniors players and the best batsmen of the shorter format of cricket are the part of the batting order of this team. Kieron Pollard, Darren Bravo, and Lendl Simmons must take the responsibilities of the batting department. Sikandar Raza, Tim Siefert, and Colin Munro are also in good form and can put the Riders to the next level of this tournament. Khary Pierre, Fawad Ahmed, and Sunil Narine will be handling the spin bowling department while Jayden Seales and Ali Khan will be leading the fast bowling department of the Knight Riders.

Guyana Amazon Warriors was the most successful and also un-lucky team of the previous season of the Caribbean Premier League. This was the team that set a record and won the all-league stage matches but unfortunately, they were beaten in the grand final under the leadership of Pakistani cricketer Shoaib Malik. Not only they won the league stage matches, but they also won the first qualifier match against Barbados Tridents. Consecutive 11 wins is a record in the history of CPL T20. They were beaten by Barbados Tridents in the grand final of CPL 2019 by the margin of 27 runs.

The team of Guyana Amazon Warriors for this season if young and will be going in this first match as a favorite team. The batting order of Warriors is young and should perform consistently. Shimron Hetmyer, Brandon King, Nicholas Pooran, and Sherfane Rutherford are the part of the batting squad of this team. Ross Taylor is another player who is known as the best batsman of the t20 format of cricket. Imran Tahir is the key and leading bowler for the Warriors. Romario Shepherd, Chris Green, and Keemo Paul are will be taking care of the bowling department.

The toss is going to play an important role in the result of each and every match of the Caribbean Premier League as we had observed in the previous seasons. According to our toss prediction, the team who will win the toss will elect to bat first as the behavior of pitch will be the same during both innings.

The 1st Match match of the Caribbean Premier League is going to be played at Brian Lara Stadium, Tarouba, Trinidad. We had observed in the previous matches played here that the pitch here at this venue is good for batting. The track is slower than the others we have seen and helps the spinners quite a bit. We are hoping that the surface is bound to get slower and be a bit more difficult for batting in this match. A score of 180 is going to be tough to chase.

The weather forecast for Guyana is not good for this cricket match. There is a lot of rain in the region and it is possible that we may not watch the full match.

Dream11 Prediction for Trinbago Knight Riders vs Guyana Amazon Warriors 1st Match match CPL 2020. After checking the latest players’ availability, which players will be part of both teams, he possible tactics that the two teams might use as we had leaned from previous seasons of the Caribbean Premier League to make the best possible Dream11 team.