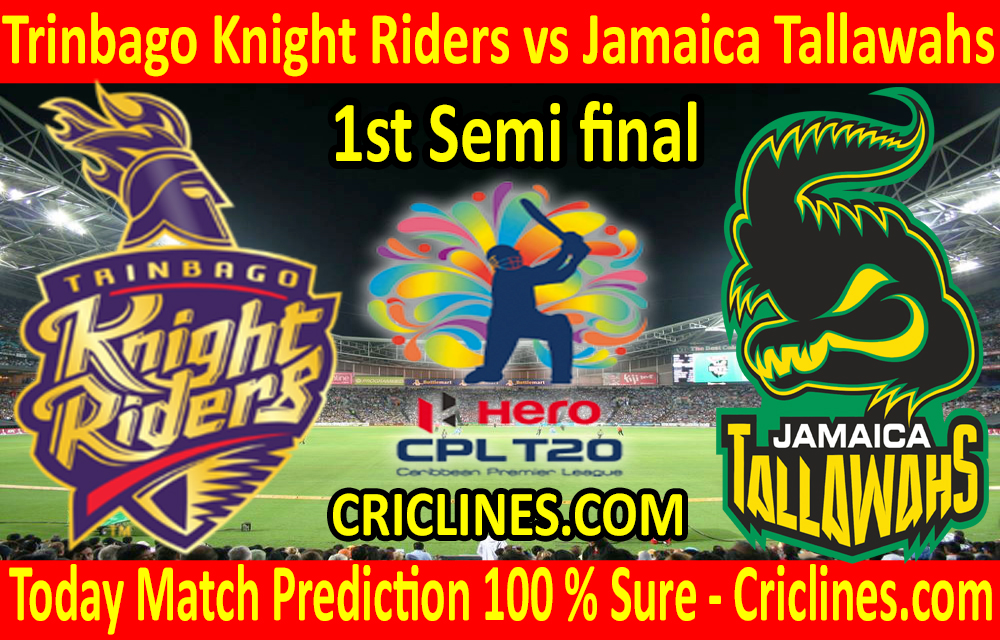 The world is ready to witness yet another big battle of the Caribbean Premier League. The 1st Semi-final match of CPL 2020 is scheduled to play between Trinbago Knight Riders and Jamaica Tallawahs on Tuesday, 8th September 2020 at Brian Lara Stadium, Tarouba, Trinidad. We are posting safe, accurate, and secure today match prediction for all matches of CPL free.

The way how Trinbago Knight Riders had performed in this season of the CPL T20 is just outstanding. They are the best performing team of this tournament after the end of the league stage matches. They had played 10 matches at the league stage and had not lost any match. They had won their all matches played and are leading the points table of CPL T20 with 20 points and excellent run rate among all other teams. They won their previous match against St Kitts and Nevis Patriots with a handsome margin of 9 wickets. They lost the toss and were asked to field first. The way how their bowling unit performed in that match was just outstanding. They send the all team of St Kitts and Nevis Patriots back to the pavilion on a total of just 77 runs in 18.2 overs. They used 6 bowlers in that match and almost all bowlers from their side performed well in that match. Fawad Ahmed was the most successful and highest wicket-taker from their side who picked four wickets in his four overs bowled out against just 21 runs. Akeal Hosein also had a good performance with the ball. He picked two wickets in his four overs bowled out while he was charged for 25 runs. Anderson Phillip, Ali Khan, Sikandar Raza, and Pravin Tambe picked one wicket each in the most recent match.

We had seen the best performances by the batting order of Trinbago Knight Riders in this tournament and also in the previous match. They chased the target of 78 runs in just 11.3 overs with nine wickets in hand. Tion Webster was the most successful and highest run-scorer from their side who remained not out after scoring 41 runs. He faced 33 deliveries and smashed five boundaries and one six. Amir Jangoo was the only batsman from their side who could manage to score 19 runs and got out after smashing one boundary. Tim Seifert remained not out after scoring 16 runs while he faced 12 deliveries and smashed one huge six. Trinbago Knight Riders had performed well in this tournament and their all departments had given their best. Now, this is a must-win match for them otherwise, they will not be able to enter the final of this tournament. We are hoping the best performance by their batting, bowling, and also from their fielding department.

Jamaica Tallawahs is the team that had failed to give their best performance in this season of the Caribbean Premier League but luckily, they have a chance to qualify for the final of this tournament. They had played a total of 10 matches at the league stage with just three wins to their name. They had lost six matches while their one match was ended with no result. They are situated in the 4th position on the points table after the end of league stage matches. They were beaten by St Lucia Zouks in their most recent match by the margin of 11 runs. They lost the toss and were asked to field first. The performance of their bowling unit was good in the previous match. They leaked 145 runs in their inning of 20 overs. Almost all bowlers from their side performed well and picked wickets in that match. Mujeeb Ur Rahman was the highest wicket-taker from their side who picked two wickets in his four overs bowled out against just 28 runs. Sandeep Lamichhane also had a good performance in the previous match. He picked one wicket in his four overs bowled out while he was charged for 20 runs. Veerasammy Permaul, Fidel Edwards, and Carlos Brathwaite picked one wicket in that match.

Jamaica Tallawahs lost the previous match due to the poor performance by their batting order. They failed to chase the target of 146 runs and could manage to score 134 runs in their inning of 20 overs. They had an excellent opening start of 84 runs but their middle-order almost collapsed in the previous match. Glenn Phillips was the most successful and highest run-scorer from their side who scored 49 runs while he faced 36 deliveries and smashed four boundaries and one huge six. Nicholas Kirton also had a good performance with the bat. He scored 25 runs on just 15 deliveries with the help of one boundary and two sixes. Jermaine Blackwood also had 25 runs to his name. He faced 38 deliveries and smashed two boundaries. Chadwick Walton had just 10 runs to his name. No other batsmen from their side could even enter into double-figure. The skipper, Rovman Powell had just two runs to his name. They are facing a strong team of this tournament in this match and should give their 100% performance to end this tournament on a good point.

The 1st Semi-final match of the Caribbean Premier League is going to be Brian Lara Stadium, Tarouba, Trinidad. We had observed in the previous matches played here that the pitch here at this venue is good for batting. The track is slower than the others we have seen and helps the spinners quite a bit. We are hoping that the surface is bound to get slower and be a bit more difficult for batting in this match. A score of 185 is going to be tough to chase.

Dream11 fantasy team lineup prediction for Trinbago Knight Riders vs Jamaica Tallawahs 1st Semi-final match CPL 2020. After checking the latest player’s availability, which players will be part of both teams, he possible tactics that the two teams might use as we had leaned from previous seasons of the Caribbean Premier League to make the best possible Dream11 team.