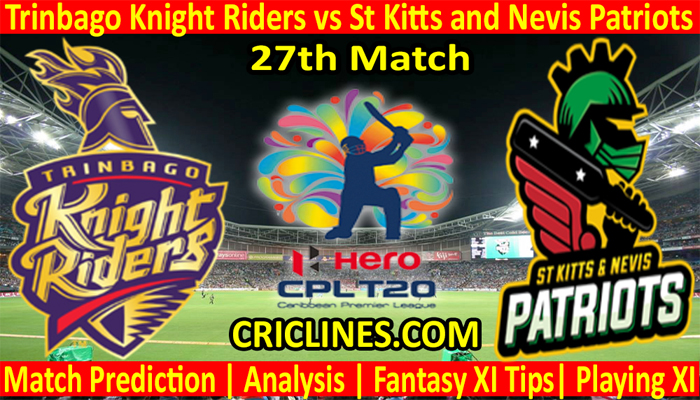 The cricket fans are ready to witness yet another big battle of the Caribbean Premier League T20. The 27th Match of CPL T20 2021 is scheduled to play between Trinbago Knight Riders and St Kitts and Nevis Patriots on Saturday, 11th September 2021 at Warner Park, Basseterre, St Kitts. We are posting safe, accurate, and secure today match prediction of matches of CPL free.

Trinbago Knight Riders and St Kitts and Nevis Patriots are the best performings and top two teams of this edition of the CPL T20, 2021 right now. Both teams had played eight matches with five wins to their names. In our opinion, these teams had qualified for the semi-finals and this match will be very interesting. This match will also decide the finalist team of this tournament.

Trinbago Knight Riders are coming to this match on the back of a massive win over Barbados Royals in their most recent match with a handsome margin of six wickets where they won the toss and decided to field first. The way how the bowling unit of TKR performed in the previous match was just outstanding. They leaked just 93 runs in their inning of 20 overs. Khary Pierre was the most successful and highest wicket-taker from their side who picked three wickets in his four overs bowled out against just 16 runs.

Akeal Hosein, Jayden Seales, and Sunil Narine picked two wickets each in the previous match. The batting order of Trinbago Knight Riders also performed well in the previous match and chased the target of 94 runs in 94 runs in 16.5 overs. Colin Munro was the most successful and highest run-scorer from their side who remained not out after scoring 41 runs. He smashed four boundaries and one huge six during his inning. Darren Bravo scored 19 runs while Akeal Hosein and Tim Seifert scored 12 runs each.

St Kitts and Nevis Patriots won their first five matches in a row but now had lost three consecutive matches. They were beaten by Jamaica Tallawahs in their most recent match by the margin of 22 runs. They won the toss and decided to field first. The performance of their bowling unit was not impressive. They leaked 169 runs in their inning of 20 overs. Dominic Drakes, Fawad Ahmed, and Jon-Russ Jaggesar picked two wickets each while Fabian Allen and van Meekeren had one wicket each to their names.

The batting order of St Kitts and Nevis Patriots failed once again in the previous match. They failed to chase the target of 170 runs and could manage to score 147 runs in their 20 overs inning. Devon Thomas was the highest run-scorer from their side who scored 35 runs with the help of two boundaries and one huge six. Joshua Da Silva scored 28 runs while Dominic Drakes smashed the inning of 22 runs on just 12 deliveries with the help of three huge sixes.

Trinbago Knight Riders had faced St Kitts and Nevis Patriots in 16 matches where they had won 12 while SNP had won 4 matches.

The 27th Match of the Caribbean Premier League is going to be played at Warner Park, Basseterre, St Kitts. We had observed in the previous matches played here that the pitch here at this venue is good for batting. The track is slower than the others we have seen and helps the spinners quite a bit. We are hoping that the surface is bound to get slower and be a bit more difficult for batting in this match. A score of 185 is going to be tough to chase.

Dream11 fantasy team lineup prediction for Trinbago Knight Riders vs St Kitts and Nevis Patriots 27th Match match CPL 2021. After checking the latest player’s availability, which players will be part of both teams, he possible tactics that the two teams might use as we had learned from previous seasons of Caribbean Premier League to make the best possible Dream11 team.