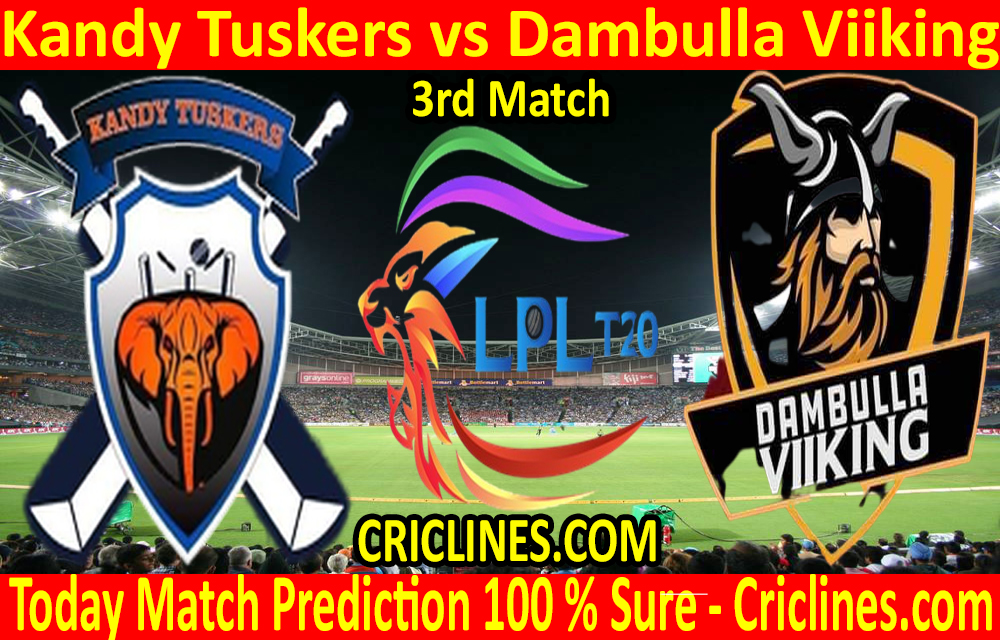 The world is ready to witness yet another big battle of the Lanka Premier League. The 3rd Match of LPL T20 is scheduled to play between Kandy Tuskers and Dambulla Viiking on Saturday, 28th November 2020 at Mahinda Rajapaksa International Stadium, Hambantota. We are posting safe, accurate, and 100% secure today match prediction for all matches of LPL T20 free.

Kandy Tuskers had failed to have a good start to this edition of the Lanka Premier League. They had lost the opening match of this tournament against the Colombo Kings. That was a tied match and was decided in the super over. They lost the toss and were asked to bat first. The way how their batting order performed in that match was just outstanding. They scored a total of 219 runs in their inning of 20 overs. Almost all batsmen from their side put some runs on the board. The skipper, Kusal Perera was the highest run-scorer from their side who scored 87(52) runs with the help of nine boundaries and four sixes. Rahmanullah Gurbaz also had an outstanding performance with the bat in the previous match. He scored 53(22) runs and smashed six boundaries and four sixes.

Asela Gunaratne remained not out after scoring 33 runs while Kusal Mendis had 30 runs to his name. Kandy Tuskers lost the previous match due to the worst performance by their bowling unit. They defended the target of 220 runs and leaked 219 runs in their inning of 20 overs. They used eight bowlers in that match and no bowler from their side could stop the batting order of the Kings from scoring the runs. Nuwan Pradeep was the most successful bowler from their side who picked two wickets in his four overs bowled out against 34 runs. Naveen-ul-Haq also picked two wickets while he was charged for 40 runs in his four overs. Asela Gunaratne and Seekkuge Prasanna picked one wicket each while Irfan Pathan, Kusal Mendis, Kaveeshka Anjula, and Kamindu Mendis were the bowlers who failed to pick any wicket.

Dambulla Viiking has a lot of young and talented players in their squad. Most of the young players is who had performed well at the domestic level and now had a chance to showcase their talent at the international level. Niroshan Dickwella is also part of the squad of this team. Kasun Rajitha, Samit Patel, Anwar Ali, and Lahiru Kumara will be taking the responsibility of the bowling department.

Kandy Tuskers is full of experienced and young players of the t20 format. The batting order of this team is also strong and some well-known hitter of the t20 format is part of the squad of this team, so the winning chances of today match for Kandy Tuskers have been increased. The equation of who will win today’s cricket match prediction and who will win the cricket match today is mentioned as under.

The 3rd Match of Lanka Premier League is going to be held at the Mahinda Rajapaksa International Stadium, Hambantota. We had observed in the previous matches played here that the pitch here at this venue is good for batting. The track is slower than the others we have seen and helps the spinners quite a bit. We are hoping that the surface is bound to get slower and be a bit more difficult for batting in this match. A score of 185 is going to be tough to chase.

Dream11 fantasy team lineup prediction for Kandy Tuskers vs Dambulla Viiking 3rd Match LPL 2020. After checking the latest player’s availability, which players will be part of both teams, the possible tactics that the two teams might use as we had learned from previous seasons of Lanka Premier League to make the best possible Dream11 team.