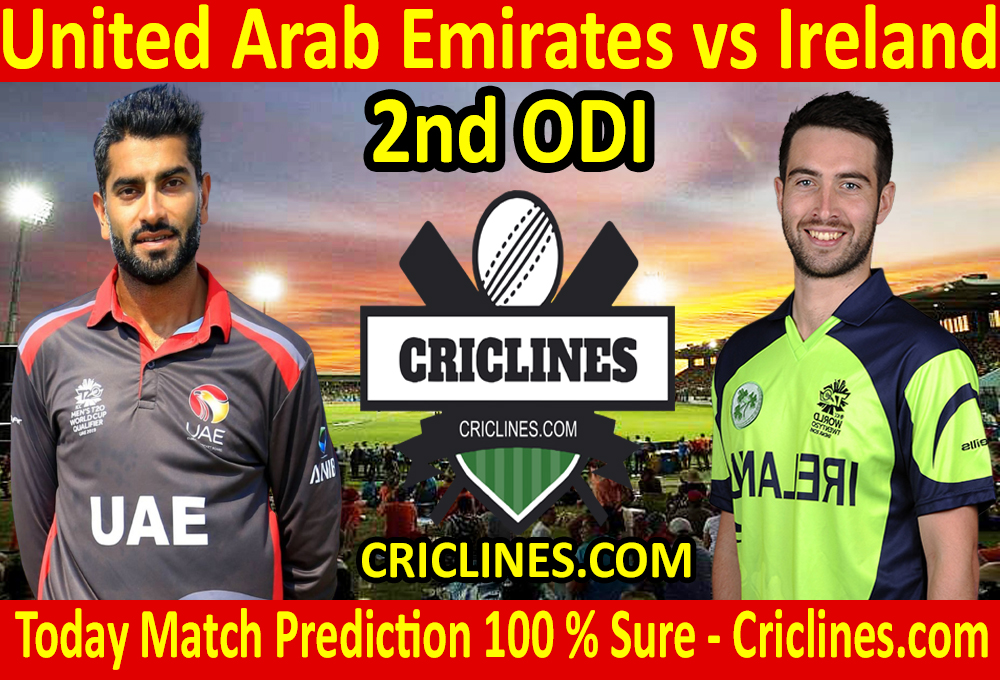 The cricket fans are ready to witness yet another big battle of ODI cricket. The 2nd ODI match of Ireland tour of United Arab Emirates, 2021 is scheduled to be held on Sunday, 10th January 2021 at Sheikh Zayed Stadium, Abu Dhabi. We are providing 100 safe, perfect, and accurate today match prediction for all matches of the United Arab Emirates and Ireland.

United Arab Emirates had a good start to this home series against Ireland and had won the first ODI of this four matches series with a margin of six wickets. They lost the toss and were asked to field first. The performance of their bowling unit was not impressive in that match. They leaked 269 runs in their inning of 50 overs. Rohan Mustafa was the highest wicket-taker from their side who picked two wickets in his 10 overs bowled out against 43 runs. Kashif Daud and the skipper, Ahmed Raza picked one wicket each while Zahoor Khan and Waheed Ahmed were the bowlers who failed to pick any wicket.

The United Arab Emirates won the previous match due to the best performance by their batting order. They chased the target of 270 runs in 49 overs. Chundangapoyil Rizwan was the most successful and highest run-scorer from their side who scored 109 runs on 136 deliveries with the help of nine boundaries and one six. Muhammad Usman was the other batsman from the UAE side who had an outstanding performance with the bat. He scored 102 runs while he faced 107 balls and smashed seven boundaries and three sixes.

Ireland failed to have a kick start to this tour of United Arab Emirates and had lost the opening match of this series by the margin of six wickets. They won the toss and decided to bat first. The performance of their batting order was good in that match. They scored a total of 269 runs in their inning of 50 overs. Paul Stirling was the most successful and highest run-scorer from their side who scored 131 runs. He faced 148 deliveries and smashed nine boundaries and four sixes. He remained not out till the end of their inning. The skipper, Andy Balbirnie also performed well with the bat. He scored 53 runs while Curtis Campher had 24 runs to his name.

Ireland lost the opening match of this series due to the worst performance by their bowling department. They failed to defend the target of 270 runs and were charged for this target in 49 overs. Curtis Campher and Barry McCarthy were the bowlers who picked two wickets each in the previous match. Craig Young, Andy McBrine, Mark Adair, and Gareth Delany failed to pick any wicket in the previous match.

United Arab Emirates had played a total of 60 ODI matches with 18 wins to their name. They had lost 42 matches.

Ireland had played a total of 160 One Day Internationals. They had won 68 matches and lost 81 matches. Their three matches were tied and eight matches ended with no results.

The 2nd ODI match between the United Arab Emirates and Ireland is going to be played at Sheikh Zayed Stadium, Abu Dhabi. The pitch at this stadium is excellent for batting. The boundaries at this venue are short and will bring the spinners into play. The pitch will continue to be good for batting throughout the match. According to the live cricket score, a total of 290 should be a par score.

Who Will Win United Arab Emirates vs Ireland 2nd ODI