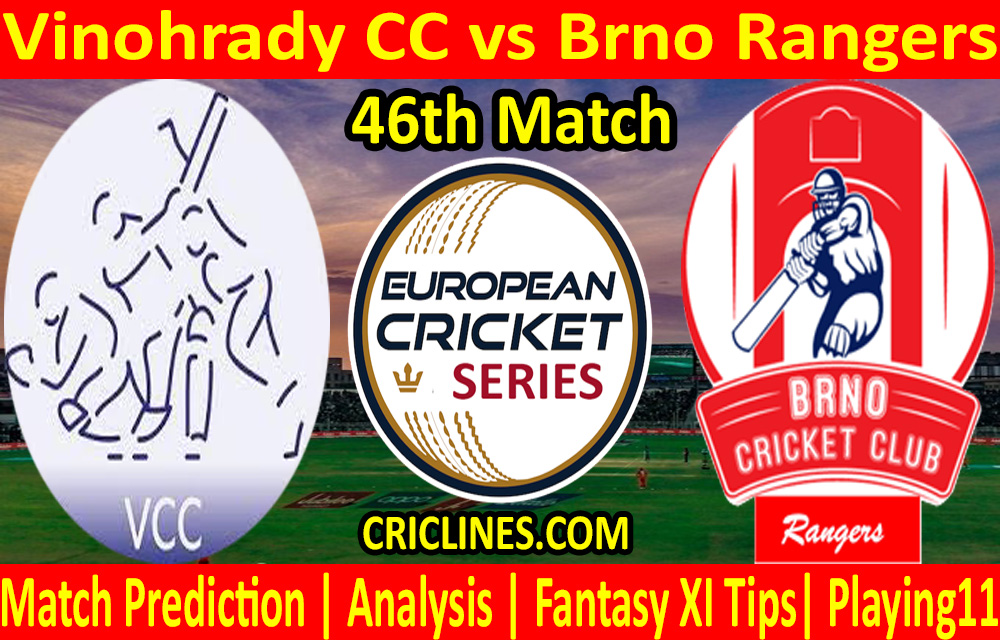 The cricket fans are ready to witness yet another big battle of T10 cricket. The 46th Match of ECS T10 Prague League 2021 is scheduled to play between Brno Rangers and Vinohrady CC on Friday, 15th May 2021 at Vinor Cricket Ground, Prague, Czech Republic. We are posting safe, accurate, and secure today match prediction for all matches of ECS T10 Prague League free.

Brno Rangers had performed well in this season of ECS T10 League and this team is the best performing team of Group B. They had played eight matches with six wins to their name. Their two matches were ended with no result and they are leading the points table of group B. They had won their most recent completed match against United CC with a handsome margin of nine wickets. The bowling department of Brno Rangers performed well in the most recent match. They leaked 84 runs in their inning of 10 overs. Ali Kashif was the highest wicket-taker from their side who picked three wickets in his two overs bowled out while he leaked plenty of runs. He was charged for 23 runs.

Rahat Ali and Sandeep Tiwari picked one wicket each while Tripurari Kanhya Lal, Naveed Ahmed, and Sitaram Prabhukhot were the bowlers who failed to pick any wicket. The batting order of the Brno Rangers also had an outstanding performance in that match. They chased the target of 85 runs in 8.5 overs with nine wickets in hand. Jan Hoffmann was the highest run-scorer from their side with 33 runs to his name. He smashed two sixes and one boundary during his inning. Dylan Steyn scored 32 runs while he faced 23 balls and smashed four boundaries. Ali Kashif scored 10 runs.

Vinohrady CC is the second-best performing team of this tournament. They had played a total of eight matches with six wins to their name. They had lost two matches and are holding the 2nd position on the points table of group A. They had beaten Brno Raiders in their most recent match by the margin of six wickets. The performance of their bowling unit was good in that match. They leaked a total of 78 runs in their inning of 10 overs. Yash Kumar Patel was the most successful bowler from their side who picked two wickets in his two overs bowled out against just eight runs.

Shubhranshu Chaudhary picked one wicket while Frederick Heydenrych, Ritik Tomar, Siddarth Goud, and Venkatesh Margasahayem were the bowlers who failed to pick any wicket. The batting order of Vinohrady CC also performed well in their most recent completed match. They chased the target of 79 runs in just 7.2 overs. Ritik Tomar was the highest run-scorer from their side who smashed the inning of 35 runs on just 13 deliveries with the help of four boundaries and two sixes. Siddarth Goud scored 27 runs and smashed one boundary and the same six.

The 46th Match of Vincy Premier League season 2020 is scheduled to be held at Vinor Cricket Ground Prague, Czech Republic. The pitch on this venue is bowling favored. A score near about 130 can be difficult for the chasing team. The average score on this pitch is 90 runs in 10 overs.