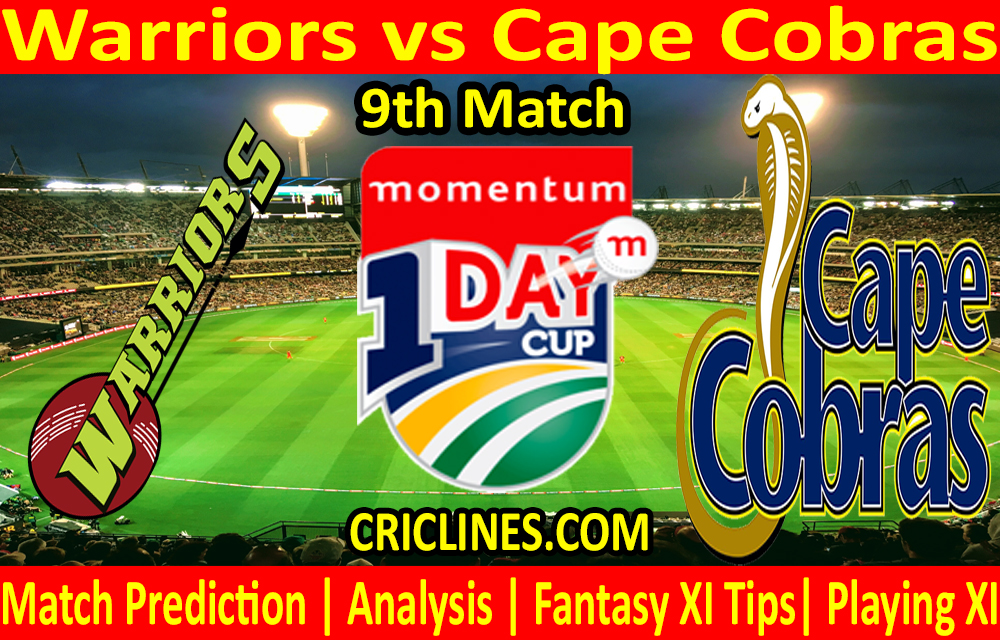 The cricket fans are ready to witness yet another big battle of ODI cricket. The 9th Match of Momentum One Day Cup 2021 is scheduled to play between Warriors and Cape Cobras on Wednesday, 27th January 2021 at Senwes Park, Potchefstroom. We are posting safe, accurate, and secure today match prediction for all matches of Momentum One Day Cup free.

Warriors had failed to have a kick start to this season of the Momentum One Day Cup. They had lost their opening match of this tournament against the Lions by the margin of 42 runs. They won the toss and decided to field first. The performance of their bowling unit was good in that match. They leaked 210 runs and send the all team of Lions back to the pavilion in 48.1 overs. Mthiwekhaya Nabe picked four wickets while JJ Smuts had three wickets to his name.

Warriors lost the previous match due to the worst performance by their batting order. They failed to chase the target of 211 runs and were all-out on the total of 168 runs in 47 overs. Wihan Lubbe was the highest run-scorer from their side who scored 42 runs. Lesiba Ngoepe scored 33 runs while Ayabulela Gqamane had 29 runs to his name. JJ Smuts and the skipper, Rudi Second failed to open the account on the scoreboard.

Cape Cobras also had failed to have a good start to this season of the Momentum ODI Cup. They host the opening match of this tournament against the Lions by the margin of six wickets. They won the toss and decided to bat first. The performance of their batting order was average in that match. They scored 221 runs and were all-out in 49 overs. Janneman Malan was the highest run-scorer from their side who scored 67 runs.

Jean du Plessis scored 34 runs while Jonker had 33 runs to his name. The performance of the bowling unit of Cape Cobras was also not impressive. They failed to defend the target of 222 runs and leaked this target in 39.2 overs. Ryan Rickelton was the most successful and highest run-scorer from their side who remained not out after scoring 109 runs. He faced 98 deliveries and smashed 12 boundaries and one six. Dominic Hendricks scored 54 runs in the previous match.

The 9th Match of Momentum One Day Cup 2021 will be played at Senwes Park, Potchefstroom. The pitch here in this stadium is good for batting and has some help in it for seamers. The players will take some time to adjust to the conditions and that could result in some bigger scores. As per the live cricket score, a total of near about 300 runs should be par.

The weather forecast in Potchefstroom is good for this matchday. We should have a full match without any rain as it played in many matches.