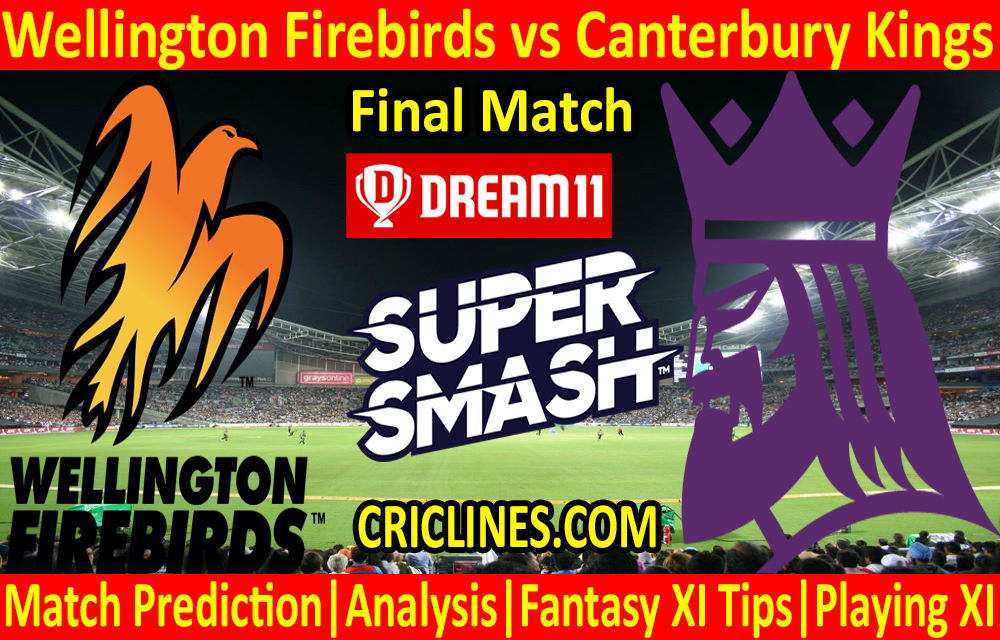 The cricket fans are ready to witness yet another big battle of T20 cricket. The Final of Super Smash League 2020-21 is scheduled to play between Canterbury Kings and Wellington Firebirds on Saturday, 13th February 2021 at Basin Reserve, Wellington. We are posting safe, accurate, and secure today match prediction for all matches of Super Smash League free.

The way how Wellington Firebirds had performed in this edition of the Super Smash League, is just amazing. They had been the best performing team of this tournament at the league stage. They won nine out of 10 matches and were leading the points table after the end of the league stage matches. They won their last league stage match against Auckland Aces with a margin of 39 runs where they won the toss and decided to bat first. The performance of their batting order was just outstanding in that match. They scored a total f 230 runs in their inning of 20 overs. Devon Conway was the most successful and highest run-scorer from their side who scored 91 runs on just 58 deliveries with the help of seven boundaries and four sixes. He remained not out till the end of the inning.

Finn Allen also had an outstanding performance with the bat in the previous match. He scored 73 runs while he faced 35 deliveries and smashed eight boundaries and four huge sixes. Tom Blundell remained not out after scoring 46 runs. The bowling department of Wellington Firebirds almost failed to give their best performance but they defended the target of 231 runs and leaked 191 runs in their inning of 20 overs. James Neesham was the highest wicket-taker from their side who picked three wickets in his four overs bowled out against 41 runs. Hamish Bennett also had a good performance with the ball. He picked two wickets in his four overs bowled out against 28 runs. Logan van Beek and Peter Younghusband also picked two wickets each while Jamie Gibson had one wicket to his name.

Canterbury Kings had an average performance in this season of the Super Smash League. They won six out of 10 matches at the league stage and were holding the 3rd position after the end of the league stage matches. They beat Central Districts in the Elimination Final match by the margin of four wickets and made their way to the final. They lost the toss and were asked to field first. The performance of their bowling unit was not impressive in that match. They leaked 180 runs in their inning of 20 overs. Daryl Mitchell and Matt Henry picked two wickets each while Ed Nuttall and Todd Astle picked one wicket each.

Canterbury Kings won the elimination final match due to the best performance by their batting order. They chased the target of 181 runs in 19.5 overs. Daryl Mitchell was the most successful and highest run-scorer from their side who scored 88 runs on 58 deliveries with the help of seven boundaries and four sixes. Cam Fletcher also had an outstanding performance with the bat. He scored 72 runs while he faced 42 balls and smashed four boundaries and five sixes. No other batsmen from their side could put some runs on the board. Chad Bowes and Henry Shipley scored one run each while the skipper, Cole McConchie could manage to score just seven runs.

Head to Head Record Between Wellington Firebirds and Canterbury Kings

The Final of Super Smash League is going to be held at Basin Reserve, Wellington. The pitch here at this venue should be good for batting as it is in most places around New Zealand. We should have a very high scoring match if we get some warm and sunny conditions. As per the live cricket score, a total of more than 190 runs should be as par.